Is Poynting vector conserved or Intensity conserved for reflection and transmission of electromagnetic wave?

When the incidence is normal, both are same but the problem arises only for oblique incidence.

If you consider a very thin cylindrical volume of negligible height, on either side of the interface, the flux of the Poynting vector through this closed surface must be zero since the stored energy is zero.

The Poynting vector $\vec S$ is an energy density with units $W/m^2$ so at an interface there is a ratio of geometrical factor that enter in the transmittance.

Explicitly, the intensity $I=\langle S\rangle \sim E_0^2$ so the reflectance $R$ - the ratio of reflected to incident power - is $$ R=\frac{I_r\cos\theta_r}{I_i\cos\theta_i} $$ where the $\cos\theta_r$ factor is the geometrical are on the interface intercepted by a beam reflected at angle $\theta_r=\theta_i$.

Because the transmission angle is not the same as the incident angle in general, the transmittance $$ T=\frac{I_t\cos\theta_t}{I_i\cos\theta_i} $$ but now the geometrical factors $\cos\theta_t\ne \cos\theta_i$. 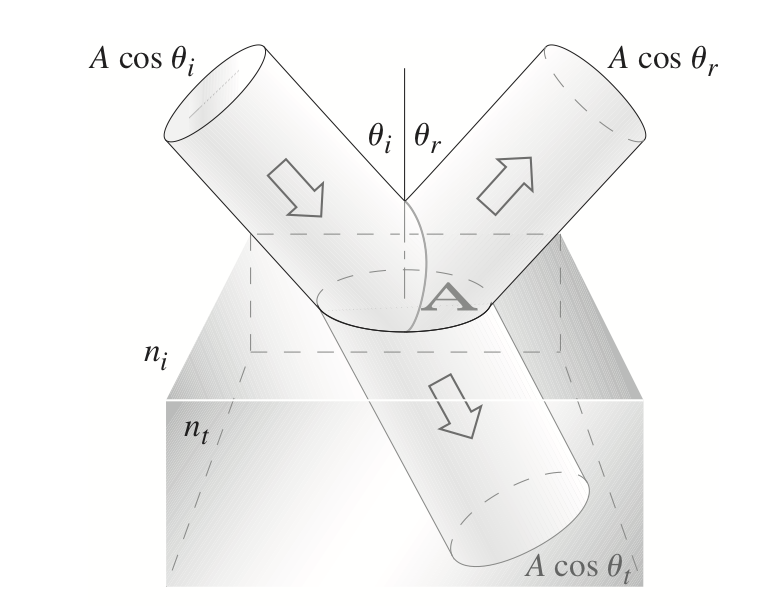 Thus, the Poynting vector (in $W/m^2)$ is NOT conserved at the interface because the surface area is not conserved, but the energy is conserved once the proper ratios of areas are included.

Both of the above answers are correct, and what I was looking for. I would like to add a physical interpretation. If you consider a finite sized beam obliquely incident on a planar boundary, you can think that the power (and not power per unit area, which is the Poynting vector) will be conserved as the beam strikes the boundary. In this case, the area of the planar boundary on which the beam strikes will be larger than the cross-section of the incident, reflected, and transmitted beams, and the effective cross-sectional areas of the beams are proportional to the cosine of the angle to the normal. The total power entering the area on the boundary (incident beam) must equal the total power exiting (in the reflected and transmitted beams). Since areas of all the interacting beams are proportional to the cosines, the final conservation expression involves Poynting vectors multiplied by the cosines of the respective angles.

Here I would like to add an interesting observation. If the beam is incident at Brewster's angle, there is no reflection, i.e., the beam is transmitted entirely. However, you can calculate that the Poynting vectors of incident and transmitted beams don't have same magnitude, which is counterintuitive. Why should the power per unit area carried in the transmitted beam change? The answer lies in the fact that the cross-sectional size of the transmitted beam will now be different from that of the incident beam! Unfortunately this aspect is not emphasized in the books.