View of the Sun from Voyager 1

Today Voyager 1 is approximately 122 AU distance from the Sun. What does the sun look like from this distance? How much brighter does the sun appear to the naked eye compared to other stars in the same field of view? Are any of the other planets from our solar system visible to the naked eye at this distance? Would the sun produce enough light for a normal person to read a book, or would the light be too dark for reading (just trying to get a practical feel of the amount of light)?

The sun would be similar in size as to many other fuzzy point-like stars in the sky. Its luminosity is pretty low at such a distance (about 122 Earth-sun distance). As Martin says, it is indeed a moon-light view.

This image is more or less similar to the 122 AU view. Thanks to Celestia (an amazing environment where I wonder about space) for this wonderful view. My travel through the solar system caught all the eight planets. The rock giants are not at all visible. But while clicking randomly around there somewhere, we could get the four planets. Jupiter is visible (like the other stars) at this distance (being somewhat big). It also pinpointed Saturn, Uranus & Neptune. But, we can't see any of them. 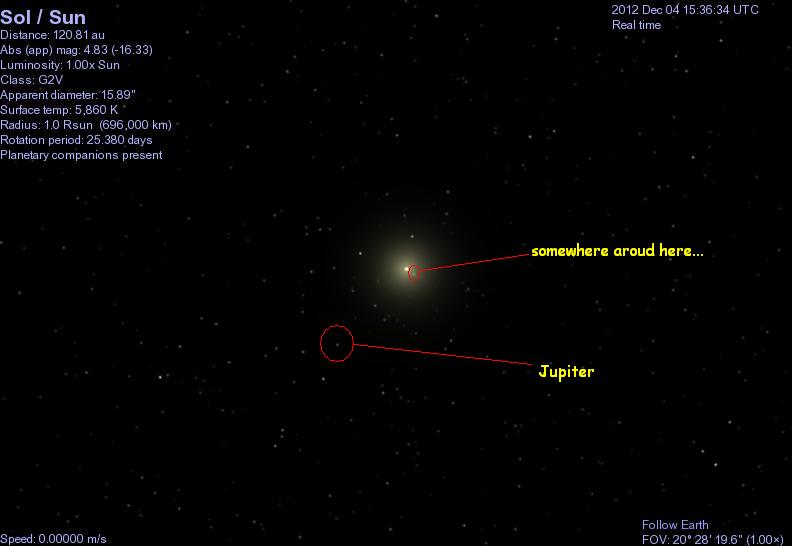 The Earth is 1AU from the sun (by definition!) so the sun is only 1/122 of the diameter in Voyagers sky. That means it would appear as large as stars appear to us on Earth by eye.

The light from the sun though spreads out with the area of the sphere, so the square of the distance. This means that at voyager it is only 1/(122*122) = 0.007% as bright. Thats about the same as moonlight compared to daylight.

All the other planets in the solar system are a lot closer to us than Voyager. Even the gas giants like Jupiter (5au) and Saturn (9au) would be visible as only faint stars.

Voyager took a famous photo of Earth (20 years ago, when it was only 40 Au away) - even with Voyager's telescope and sensitive camera it is just a pale blue dot

The sun would still appear relatively bright from voyager. Given the apparent magnitude of -16.33, it is estimated to be around 25 times the maximum brightness of a Full moon from Earth (~-12.7).

Hence from voyager the sun would still be a bright pinpoint of light which can be discomforting to look at... The light at that brightness would be sufficient enough to read a book.

light is not visible from space the light we see from earth is as a result of the interaction of atmosphere in the same way you observe the the aurora borealis, The sun is NOT visible in space to the human eye, as it emits no visible light only particles which have to interact with matter before they can be detected. nasa has to put a special coating on the visors and windows of the space shuttle to see the sun light without the proper shielding one would not be looking at it (or anything else) for much longer.

Not the answer you're looking for? Browse other questions tagged astronomy observational-astronomy or ask your own question.

11
Names, maps for Milky Way dust clouds? (Dark Cloud Constellations)
6
How does the view of night sky change as the Sun orbits around the Milky Way?
8
How does nuclear war look like from space?
9
What planets are visible to the naked eye from Mars?
50
Can anything be seen from the center of the Boötes void? How dark would it be?
1
Astronomical objects that should have magnetic bubbles similar to those found by the Voyager probe at the edge of our solar system
1
Is the dark night sky paradox (Olber's paradox) really a paradox if we count with simple astronomical observations?