In the III region of the maximally extended Schwarzschild solution, described in the Kruskal coordinates , Sch. time runs in the reversed direction as compared to the I - event horizon III-II of the photon from III is at the past infinity, while the III-IV is at the future infinity. This is refered to as a ``mirror wormhole''

I have seen that this is sometimes interpreted as if the both I and III have the same time direction? How so?

In the III region of the maximally extended Schwarzschild solution, described in the Kruskal coordinates , Sch. time runs in the reversed direction as compared to the I - event horizon III-II of the photon from III is at the past infinity, while the III-IV is at the future infinity.

Not true. This is an obscure attempted reinterpretation of this spacetime, and it has unacceptable physical properties, for the reasons described in your link.

This is refered to as a ``mirror wormhole''

He's using this term only to describe the nonstandard attempted interpretation.

To show how the different regions are labelled, here's the picture linked in the OP: 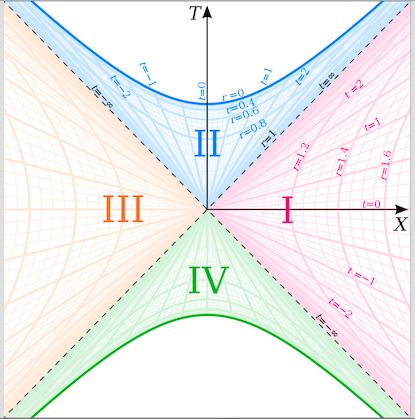 In this picture, all straight lines at $\pm 45^\circ$ are null rays, so if we choose a coordinate system $T,X$ with $T$ running vertically and $X$ running horizontally (as labelled in the picture), then the $T$ coordinate is timelike everywhere. Therefore, we can define a time orientation by declaring that the "future" is the direction of increasing $T$. For any point in any of the four regions, the time orientation unambiguously specifies which half of the light-cone is the "future" half. (We could also define the time orientation by choosing the "future" direction at just one point; the choice of orientation must be continuous, so this implicitly specifies it for all points.) The hyperbola at the top of the picture is the future singularity, and the hyperbola at the bottom is the past singularity, and this applies in all four regions.

Instead of using the $T,X$ coordinate system to describe the spacetime, we can also describe it using a different coordinate system. In particular, we could describe it using Schwarzschild coordinates $t,r$ (except on the event horizon, which is represented by the dashed lines in the picture). In the picture, lines of constant $t$ are straight lines through the origin. The $t$ coordinate is timelike and future-directed in region I, timelike and past-directed in region III, and spacelike in regions II and IV. When people say things like "time runs in reverse in region III," this is presumably what they mean (assuming they know what they mean). It is a statement about a particular coordinate system, not a statement about physics. Saying that time runs backward in region III is no more physical than saying that time runs sideways in region II. The coordinate $t$ is just a coordinate. The $T$ coordinate that was used above is also just a coordinate, but unlike $t$, the coordinate $T$ is timelike everywhere and may therefore be used to define a consistent time orientation as described in the preceding paragraph.

By the way, I don't mean to suggest that region III has any real physical significance. The eternal black hole solution is an idealization, and a real black hole (that forms by collapse) won't have regions III or IV. But still, an important message here is that coordinates are just coordinates, whereas the concept of a time orientation has physical significance independently of coordinates, and that's true in any spacetime (in classical general relativity, at least). I'm using the maximally-extended Schwarzschild spacetime to illustrate these general principles.

Not the answer you're looking for? Browse other questions tagged general-relativity black-holes relativity causality wormholes or ask your own question.

4
White Holes and Time-Reversed Oppenheimer-Snyder collapse
5
Does the maximally-extended Schwarzschild horizon see the entire past of the parallel universe?
3
Is there some physical interpretation of the parallel exterior region?
1
Physics of time running backwards
0
A few questions about white holes
3
Any theory/author using the white hole model to explain the birth of the universe?
1
Is the Schwarzschild wormhole (Einstein-Rosen Bridge) time dependent?
1
How to relate the Schwarzschild time $t$ to the status of the wormhole featured in the Kruskal diagram?