Why is the far point of human eye infinite?

In my exams, the presence of this question, which unfortunately I couldn't answer, made me wonder why is the far point of an eye infinite?
First thing that came into my mind was that how come we can see till infinity?
Far point of eye is sometimes described as the farthest point from the eye at which images are clear. As stated here
There's obviously a limit to a distance where the eye can see. If there is, then why isn't that taken in consideration for accurate measurements?

In optics, it is the region from which a point on an object sends rays of light which are considered to be parallel onto an optical system. Consequently it forms a clear image in the focal plane of that system. In clinical optometry, 6 metres is usually regarded as infinity.

Therefore the far point of the human eye isn't limited by distance, but by circumstances obscuring light beams from reaching us.

When you look at a nearby object like a little arrow, some of the light reflected from the tip enters your eye. The lens focuses all those rays to the same point on your retina. Thus that point on your retina is lit up with light from the arrow tip, and you see the tip.

The rays from the tip that enter your eye fill a cone. From the diagram, you can see the angle at the tip of the cone is a few degrees.

Likewise, light from the base of the arrow that enters your eye is focused to a point on your retina, and you see the base. And so on for all the other points. The rays from each of these points that enters your eye fills similar cones. The angles at the tip of each cone is pretty much the same.

If you look at an object farther away, muscles in your eye will stretch the lens to a more gentle curve, which give the lens a longer focal length. It adjusts to focus rays from the more distant object onto the retina.

Since this cone is longer and the base is the same, the angle at the tip of the cone is smaller. That means the rays in the cone are closer to parallel.

For a really distant object like a star, the cone is light-years long. But the base is still the size of the pupil of your eye. The rays in this cone are almost perfectly parallel. The angle at the tip is a tiny fraction of an arc second.

For an object truly an infinite distance away, the rays would be parallel. 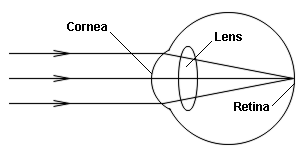 As other answers point out, light that leaves a distant object in the direction of your eye will eventually get to your eye, unless something else is in the way. Light spreads out and gets dim as it travels. But light from a bright object like a star may still be bright enough for you to notice the light. If we ignore cosmological issues like the expansion of the universe, there is no distance too far too see.

There's obviously a limit to a distance where the eye can see.

But such limits are not a function of the eye itself. For objects on earth the distance we can see depends on atmospheric conditions, curvature of the earth and size of the object.

For stars in the sky it ultimately comes down to brightness. Distant objects appear as points of light and the further away they are the dimmer they get, both because of inverse-square losses and because their spectrum gets redshifted. Eventually they become so dim the human eye can't see them.

why is the far point of an eye infinite?

Because as you get further from an object the rays from any given point on the object get closer to parallel and they are already near as damnit paralell at distances that are biologically relavent.

The resolving power of the human eye is about 30 arcseconds. So from a focusing point of view the difference between an object 100m away and an object at infinite distance is negligable.