Could the singularity of a black hole just be an iron / dark matter sphere? [duplicate]

Ask Question
Asked 1 year, 9 months ago
Active 1 year, 8 months ago
Viewed 563 times
2
$\begingroup$
This question already has answers here:
Can we have a black hole without a singularity? (2 answers)
Closed last year.

A singularity would break physics wouldn't it? How does a massive star collapse and suddenly fall into a point in space with no dimensions what so ever when it had a core and perfect balance between gravity and mass before its death?

This would certainly make no sense in the process right. Is there a simulation where this kind of behaviour is illustrated?

The only way the singularity of a black holes could make sense is when for example a massive star collapses due to gravity and its core being unable to fuse iron into a heavier element, the only thing left is pretty much the core being either iron or a new unknown element heavier than iron cough dark matter? cough .

This core's gravitational force is so strong that it bends light though if we were remove the force and just look under the hood of the object, we would simply just see a spherical object made out of iron or something heavier / unknown like perhaps dark matter.

TL;DR the core remains but we can't see it due to its gravitational force / strength thus a singularity would not exist.

How likely is that kind of concept? (I'm definitely not an expert in this field but I want to understand this concept better and see whether my ideas could possibly make sense) 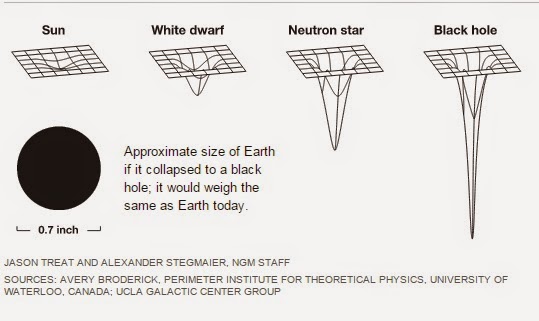 Iron can't exist in hydrodynamic equilibrium under the relevant conditions. We also observe at least some black holes whose masses are above the Tolman-Oppenheimer-Volkoff limit, so they can't be degenerate electron or neutron matter.

The Chandrasekhar limit is proportional to $m^{-2}$, where $m$ is the mass of the electron. Since dark matter particles have a mass greater than the mass of the electron, the Chandrasekhar limit for dark matter would be much lower, and therefore you're not going to get solar-mass degenerate-matter stars made of dark matter. (It would also be difficult to get such a thing to form by gravitational collapse.) I've spelled out the details of the estimate in more detail at the end of this answer.

Another popular dark matter candidate is the axion, which is a boson. Most models limit the mass of stable stars made out of axios to extremely small values. It does not appear possible to get these objects with the kinds of masses we see, for example, in Sag A*.

A singularity would break physics wouldn't it?

Not really. See Why exactly are singularities avoided or "deleted" in physics?

Details of the estimate for fermionic DM

Ignoring factors of $\pi$, etc., the pressure of a relativistic, degenerate gas is $P\sim hc(n/V)^{4/3}$. The pressure at the core of the star is $P\sim GM^2/r^4$, where $M$ is the total mass of the star. The star contains roughly equal numbers of neutrons, protons, and electrons, so $M=Knm$, where $m$ is the mass of the electron, $n$ is the number of electrons, and $K\approx 4000$. Setting the pressure at the core equal to the degeneracy pressure of a relativistic gas, we find that the Chandrasekhar limit is $\sim (hc/G)^{3/2}(Km)^{-2}=6M_\odot$. This is ignoring factors of $\pi$, etc., but is still on the right order of magnitude, and I expect the dependence on the variables to be right. For a star made out of dark matter, we have $K=1$, but current estimates of the mass of WIMPs are in the range near about 10 GeV, or $2\times10^4 m_e$. This makes the factor $Km$ greater by something like a factor of 5, so that the Chandrasekhar limit should be smaller by about a factor of 25. Of course there is considerable uncertainty here, but it does seem sufficient to rule out the existence of stars made out of degenerate WIMP matter with masses greater than the white-dwarf version of the Chandrasekhar limit.

Not the answer you're looking for? Browse other questions tagged gravity black-holes astrophysics singularities stellar-physics or ask your own question.

15
Can we have a black hole without a singularity?
23
Why exactly are singularities avoided or “deleted” in physics?

3
Does a black hole have enough time to actually form a singularity?
8
Inside a huge sphere, which is being converted to a black hole
1
Why aren't all large stars black holes?
3
What prevents a star from collapsing after stellar death?
1
Could black holes be driving the expanding universe (dark energy)?
1
Do all paths leading into a black hole lead directly at the exact center of the singularity? Or could they go very near it and curve back?
5
What is the largest possible mass for a stable planet made of iron?
1
The inside of of a black hole
2
Does fusion continue to happen as a star collapses into a black hole (beyond our view)?