In Fruchart et al.'s An Introduction to Topological Insulators, the Bloch Hamiltonian for a two-band insulator is given in the general form $ H(k)= $

which can be rewritten on the basis of Pauli matrices plus the identity matrix $\sigma_0 = 1$ as:

Now, the Haldane model's tight-binding Hamiltonian is given as:

The Fourier transform of the Hamiltonian above with Aharonov–Bohm phases leads to a 2x2 Bloch Hamiltonian in the (A, B) sublattices basis:

My question is: how do I change the gauge of the Hamiltonian and get new expressions for $h_x, h_y, h_z$? Specifically, I want to apply the gauge transformation $g_2(k) = $

Using references online, such as some posts on here and this website, the standard protocol seems to involve finding a Unitary matrix $U$ and verifying the identity $U \hat{H} U^\dagger = \hat{H}$. However, it is not clear to me how I could apply the above gauge into the Hamiltonian to get new expressions for $h_x, h_y, h_z$. In the event my question is ill-posed, I would appreciate clarification on what's wrong with my reasoning, and I hope you read the following motivation behind my question with the hope of clarifying the problem from which it stemmed.

The motivation for my question comes from this paper by Dobardzic et al.: Effective description of Chern insulators. My end goal is to visualize the Berry curvature of the Haldane model over the Brillouin zone, but in a different gauge. Currently, I compute the Berry curvature over a discretized grid by evaluating the equivalent Berry connection using the following idea:

Without any consideration of gauges, I replicate the up-right figure in their results (copied below) by using the $h_x, h_y, h_z$ specified above. 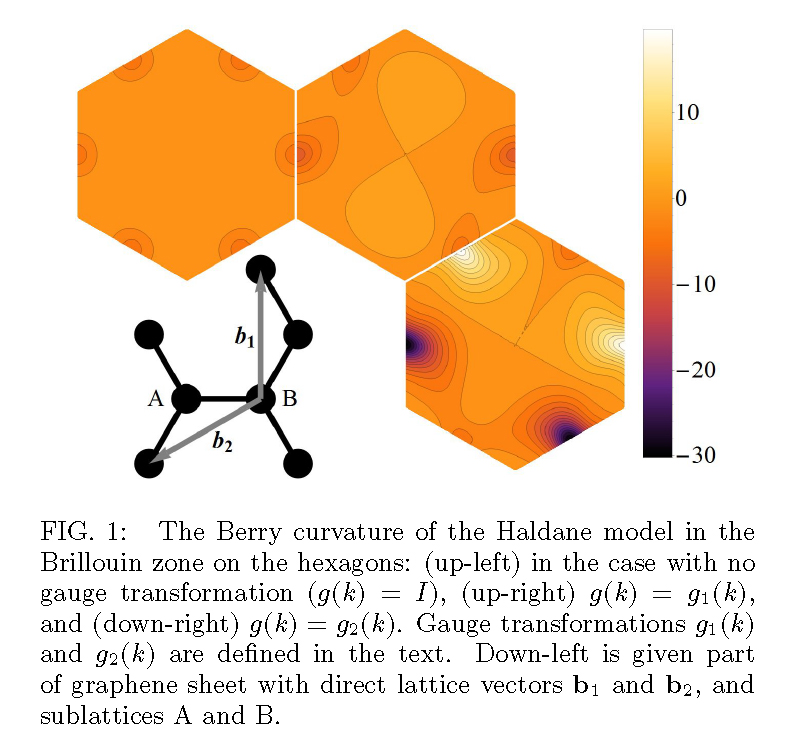 From the paper, this apparently corresponds to a gauge transformation using $g_1(k) = $

However, I now want to replicate the down-right figure by applying $g_2$, and my guess is that I can use the same code I did (i.e. approximating $\mathcal{A}^{\mu} \Delta \lambda_{\mu}$ over a rectangle in the Brillouin zone) but with a gauge-transformed Hamiltonian. I can follow theoretical proofs of gauge dependance/invariance under certain transformations on Berry connection $A$ and Berry curvature $F$ (such as in this article), however, my code relies on the Hamiltonian components $h_x, h_y, h_z$ and so it is not clear to me how I can go about replicating the figure I need. If it isn't the Hamiltonian that changes under this gauge transformation, it is probably $A$, and I would still like insight on how to think about this too.

I apologize this question is too long, but I would appreciate any pointers/references on how I could solve my problem! Please let me know if any crucial information is missing. Thanks!