Stress tensor of an elastic medium

I don't understand a passage from the book I'm reading about tensor analysis. The state of stress of an elastic medium can be expressed by the stress function $\mathbf{p}(r,n)$ so that the force acting on an arbitrary element of area $d\sigma$ is $\mathbf{p}(r,n)$ $\cdot d\sigma$, with $\mathbf{n}$ the normal of $d\sigma$ and $\mathbf{r}$ the radius vector of the point M, of application of the force.

In the limit of the body shrinking to the point M, we find that: 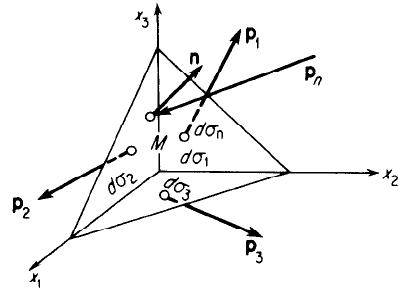 I guess that $p$ has units of force per unit area, like pressure. Consequently, $p_1\cdot d\sigma_1$ is the force on the plane $1$, and your equation is then

Which makes sense: the total force is the sum of three cartesian components. Such net force will depend (in magnitude and direction) on the proportions in each component.

I don't know the exact context wherein you're studying the matter. In particular, if it's statics or dynamics. But we may work on both for the same price. In statics we'll require $\bF=0$. In dynamics we would write $$\bF = m \ba$$ with $m$ the tetrahedron's mass, $\ba$ the acceleration of its com.

Not the answer you're looking for? Browse other questions tagged tensor-calculus stress-energy-momentum-tensor stress-strain or ask your own question.

15
Maxwell's Stress Tensor
1
Why are stress forces considered as acting on a cross-sectional area through a solid?
2
Pressure in the stress tensor?
6
Why does stress need to be described with a tensor?
1
Making sense of the stress tensor for elastic deformations