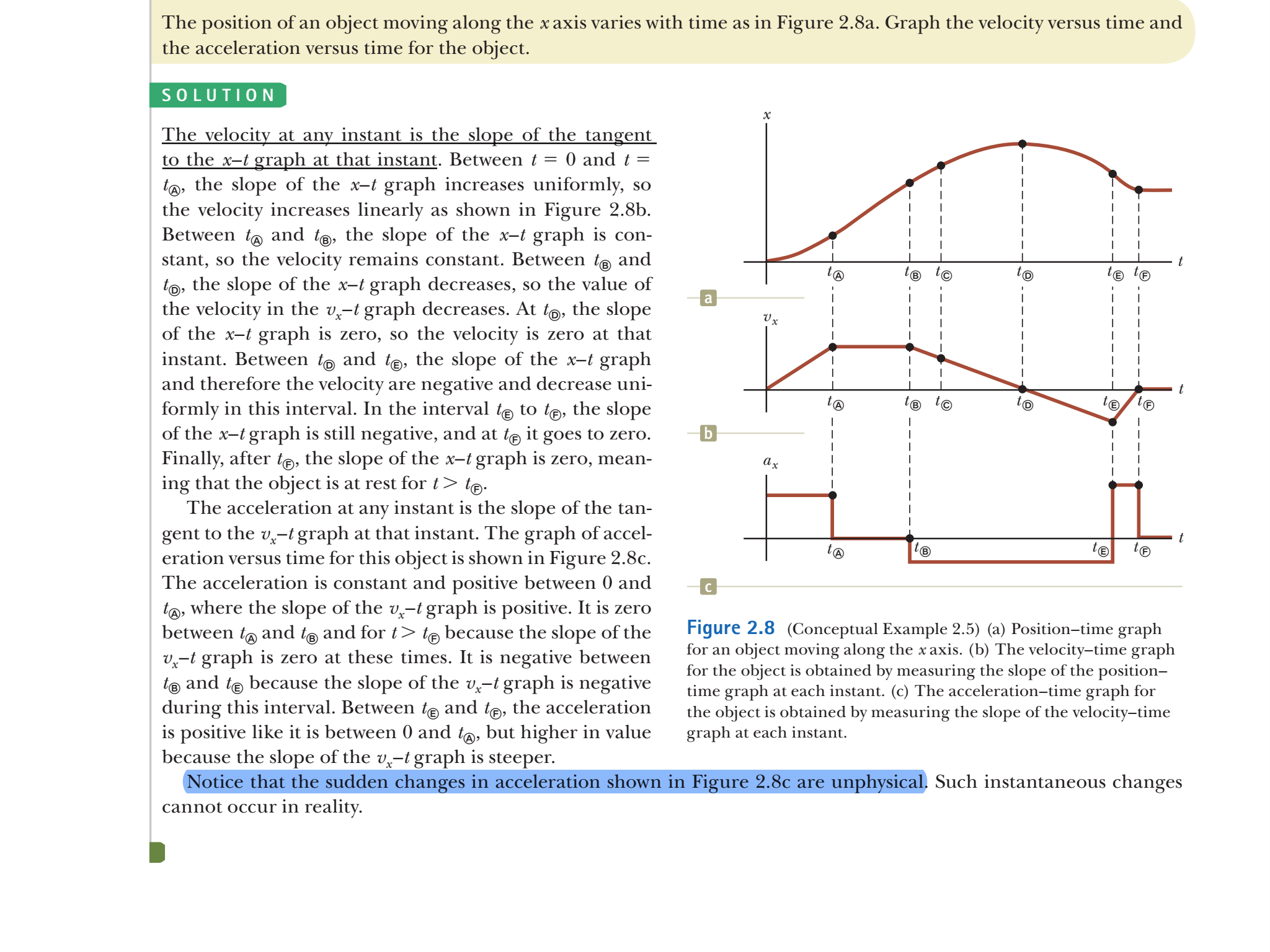 These are very simple looking graphs. What I don’t understand is (I’m talking of the highlighted text in blue at the bottom), it says such instantaneous changes in acceleration can not occur in reality. If acceleration is positive for a certain time interval, can’t it be zero instantaneously if we stop pushing the body, i.e if we stop applying force on it ‘suddenly’? Similarly, if a body is moving with a constant velocity (acceleration is zero), and if we apply brakes suddenly, doesn’t its acceleration become negative instantaneously? I can’t seem to understand why the third graph is not possible, as the book says.

And, if the third graph is not possible, it means the two graphs above it are not possible either, are they? Because all three graphs here describe the same physical situation. Please help me understand this. Thanks

Sorry for my poor english !

A discontinuous force, $F(t)$, is a force that I see vary from a finite quantity in a zero time. In physics, we always have a temporal resolution of the measuring system. This force varies very quickly, on a time less than the resolution in time of my measurements.

One could say, "if I improve the resolution in time, I will see that the function $F(t)$ is actually continuous".

For the car that brakes it is surely true. But in general, it's not sure ! One could imagine a time scale so short that one has to bring in quantum mechanics, or the Brownian movement .... and have to abandon the notion of force before seeing it as a continuous function.

One can imagine the same situation in electrostatic conductors. Surface densities of charge are used. One could say, "in a finer modeling, these densities are volume densities". But it may happen that by decreasing the spatial scale, the atomic structure appear before having been able to consider the surface charges as distributed in volume.

Practically also any real change in velocity or position will take a finite time.

In view of these problems, when such idealized situations are described to illustrate physics ideas, the limitations are also mentioned. The highlighted text is one such example

This happens in quantum mechanics when an electron in an atom is excited to another state. This happens instantaneously. The acceleration towards the centre is changing abruptly since the possible states of the electron is quantised. So at-least in QM, acceleration can change abruptly.

Let us have a good look at the third graph. The acceleration suddenly becomes 0 at time Ta seconds.

Now let us return back to the real world. Imagine you are pushing a block with a force which causes an acceleration a in it. Now, when you stop pushing it, what happens? Does the acceleration drop to zero?

No, that is not the case. Friction keeps on acting on the sliding block, which which will slowly decelerate it it zero speed. When you start pushing a body suddenly, the body accelerates quickly, but not as shown. It takes some time, however small it may be(0.01 sec or even small)

So that type of graph is not possible.

Not the answer you're looking for? Browse other questions tagged kinematics acceleration jerk or ask your own question.

22
Can an object *immediately* start moving at a high velocity?

0
Physics of Auto Crashes and Airbag Modules
1
Acceleration to Displacement
1
Does slope of $y$ vs $x$ curve tell anything about magnitude of instantaneous velocity at that point?
1
Instantaneous Velocity at a Sharp Point