Duration of an accelerated movement in special relativity

Consider a point $P$ which does the following (one dimensional) movement:

However, for the other parts the initial velocity is not zero and then the function I get when calculating $\Delta t=\int\gamma\:\mathrm{d}\tau$ is not easily invertible.

Is there a better way to do this?

From your setup, there is symmetry to exploit. If you break up the T-to-3T trip in half, you can see [by drawing a spacetime diagram] that you have four congruent legs to your trip. You just calculated the duration of the first leg. So, by symmetry, multiply that by 4 to get the total duration.

In this second update, I have shown three uniformly accelerated observers as with dashed worldlines, which are hyperbolas on a spacetime diagram. Since the magnitudes of their proper-accelerations are equal, these hyperbolas are congruent--related by reflections in space, reflections in time, and translations on this spacetime diagram.
[If we were doing Galilean relativity, these would be congruent parabolas.]

This round-trip starting and ending at rest in this frame is essentially the splicing of four congruent portions.

[As a simpler case, suppose the traveler departed with a nonzero outgoing speed and returned at the same speed.... essentially the magenta observer. Is it clear that if that trip were split into halves, those halves have equal elapsed times.] 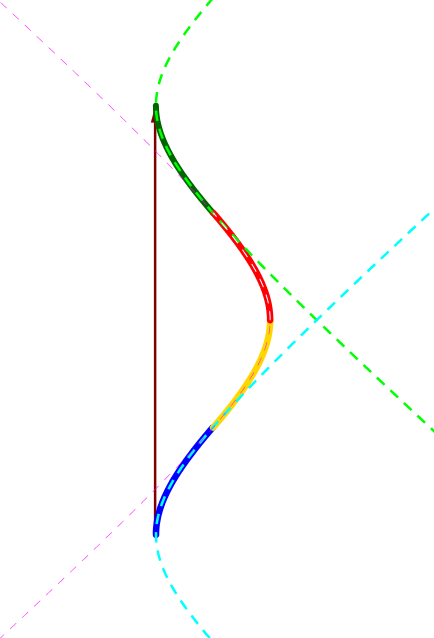 Consider the first leg of the trip... uniform-acceleration $a_0$ to the right.

Similarly, if you ran time in reverse [retrodiction, if you will], then at earlier time $-\Delta t_1$, is it clear that the traveler would have had the opposite velocity (same speed, opposite direction) as the original?
This time-reflected segment is a translation of the leg that returns at the reunion event.

Not the answer you're looking for? Browse other questions tagged homework-and-exercises special-relativity kinematics reference-frames coordinate-systems or ask your own question.