I am reading Einstein's book, "Relativity: the Special and General Theory" translated by Robert W. Lawson, and I have some questions concerning Special Relativity -- specifically, the thought experiment of the simultaneous lightning.

In the reference of the embankment

In coordinate system R, points A and B are the positions of the lightning strikes (where $A_x < B_x$). Point M is the midpoint of A and B (along the x axis; it's time component is arbitrary). Ray A (slope of 1) and ray B (slope of -1) represent the change of position versus time of two photons emitted by A and B respectively. Line M (vertical) represents the (lack of a) change of position versus time. Note: the greater the slope of a line, the less the speed because time is the vertical component in this example.

A train is moving along the embankment at a constant velocity. Given any point on the train, a line can be drawn on coordinate system R to show its position versus time. The slope of that line is $s$. Construct a line with a slope of $s$ from the intersection of rays A and B and line M. The point on the train which corresponds with this line is M'.

A less abstract way to choosing point M' is simply whatever point on the train be in the same x position as both photons and the observer at point M (let's assume the observers and the train are both ghosts that can pass through each other -- welcome to one dimension) in the reference frame of the embankment.

Now we have the following coordinate system R: 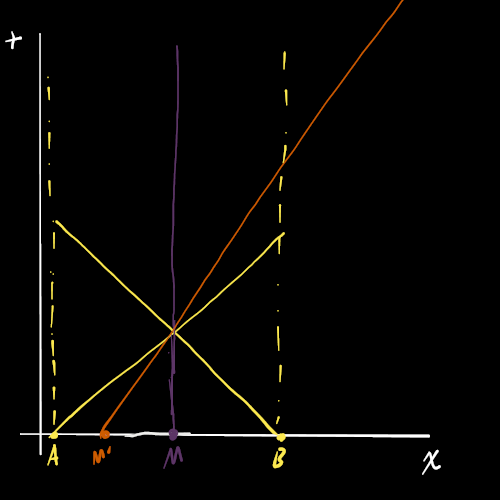 The point where all the lines intersect represents the moment in time and the position of both observers as they observe the light from both lightning strikes as simultaneous.

In the reference of the train

(Here's where my question starts to come up)

When the lightning strikes, point M' is closer to A. Now, don't worry about how we said, "When this happens" as we're trying to define simultaneity because point M' is closer to A at any time before any light from any lightning strike reaches the observer. In classical mechanics, the speed of light would be slowed down coming from A because the source is moving away from the train (or the train is moving away from the source), and the light from B would be moving faster. Therefore, in classical mechanics, the viewer on the train would see both lightning strikes as simultaneous.

However, if we accept that the speed of light is constant in any inertial frame of reference, then the light emitted by points A and B will both be the same. Therefore, the observer at point M' will see the light from A before he sees the light from B.

Here is the coordinate system of R': 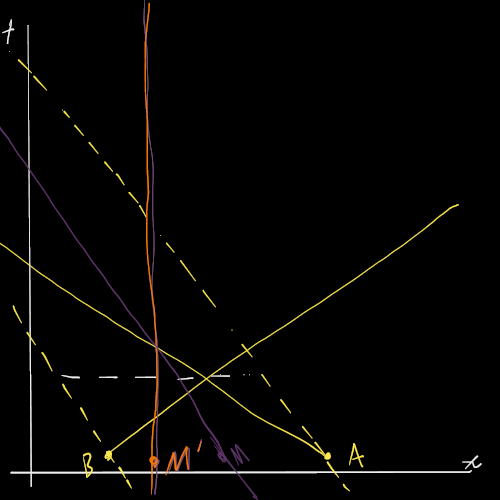 After conducting this thought experiment, Einstein explained the Lorentz transformation.

I haven't plugged in any values, but it seems to me that if I applied the Lorentz transformation for each point in R, (A, B, M, and M'), I would have gotten the points that correspond to those points in R' such that the light rays would still intersect at point C' (whereas they intersected at C in coordinate system R).

Note: please let me know if my diagrams are incorrect, which ones, how, and preferably an alternate diagram unless you really just can't draw ;)

Where you are going wrong is to assume that the time axis of the observer on the train is the same as the time axis of the observer on the platform. If the lightning strikes are simultaneous in the platform frame, then the right-hand flash will have occurred before the left-hand flash in the frame of the train. The flashes will be seen simultaneously by someone sitting on the train to the rear of the centre of the train, so that the earlier right hand flash, having more time to travel, reaches that point at the same time as the later left hand flash.

Not the answer you're looking for? Browse other questions tagged special-relativity inertial-frames lorentz-symmetry observers thought-experiment or ask your own question.