What happens to a system of capacitors when a dielectric is inserted into one of them?

sorry for my English. While doing some homework I've stumbled upon this "circuit": 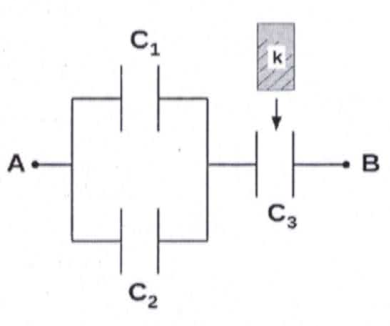 At first the problem asks to calculate the total capacitance of the system before and after the insertion of the dielectric in C3; when asked to calculate the potential difference for C3 only, the solution:

But why does this happen? The solution gives only this as "explanation":

"The final charge on the capacitor 3 will be equal to the total charge of the system."

I have already tried to wrap my head around this and I can't get it; maybe it has something to do with the fact that the first two capacitors are in parallel? Maybe they lose all their charge? But why does this happen?

Consider the part of the circuit I have outlined in red: 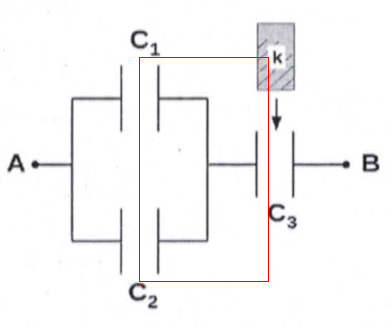 This part of the circuit is isolated from A and B so no charge can flow off or onto it. That means if its total charge is zero before we apply any potential its total charge must remain zero after we apply a potential. All the potential does is cause a charge separation. Fr example if B is the positive electrode then the charge would look like this: 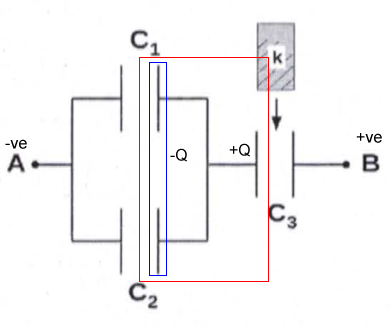 The charge on both $C_1$ and $C_2$ combined adds up to $+Q$. How much of this is on each capacitor depends on the relative values of their capacitances. Anyhow, since the charges on the plates of a capacitor are equal and opposite we can fill in the rest of the charges: 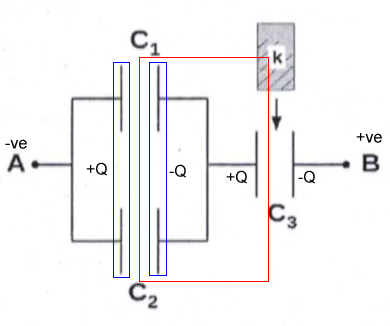 Simple, the charge measured in coulombs is the current in amperes times the time in seconds, so Q=I*t. since C3 is connected in series with both C1 and C2 this means that any current flowing through C1 and C2 will also flow through C3.

In other words if capacitors are coupled in series the current through them is always the same according to KCL and hence the charge that builds up on them is the same.

Hope this answers your question.

4
Dielectric slab inserted into a constant voltage capacitor
0
Capacitors in a series circuit with dielectric
0
Am I correct in finding the charge, electric displacement, electric fields, and energy of this circuit system?
1
Why does increasing capacitor dielectric allow it to store more charge under constant voltage?
0
A circuit with three capacitors in series
1
What happens if two capacitors having different charges is connected in series?
0
What happens when an external agent changes charge on a working capacitor?