Is there any possibility in the future that domestic power consumption could be wholly solar powered?

Assuming a standard sized, mid terrace house with four bedrooms, a kitchen with fridge, electrical cooker and washing machine, a bathroom with shower. What would be normal daily energy consumption over the year?

Could this feasibly be extracted by all the sunlight that falls on the building, that is on the roof, and building walls, assuming 100% efficiency?

(My future science-fictiony solution is a coat of paint on the building which has the property of photo-synthesising at 100%! (But of course much likely a lot less))

I just want to see just how feasible this would be without going into how one could manufacture such a paint.

First, let's do some back-of-the-envelope calculations. The word for the average amount of Solar energy reaching the Earth's surface over the course of a year is "insolation." According to this page, insolation in populated areas ranges from $2.27\,\mathrm{kWh/day/m^2}$ in Norway to $5.26\,\mathrm{kWh/day/m^2}$ in Miami, Florida. In slightly different units this gives a range of $94.6\text{-}219\,\mathrm{Wm^{-2}}$. This is the total energy reaching the surface, and it's not thermodynamically possible to extract all of it, but since Solar radiation has an effective temperature of $6000\,\mathrm{K}$, you can get pretty close. So let's apply a factor of about 90% and say you could extract around $85$ to $200\,\mathrm{Wm^{-2}}$ with advanced enough technology.

Now, from here the US average domestic power consumption is around $2\,\mathrm{kW}$. (The US average is pretty high compared to most other countries.) This means that you would need around $2000/20 = 10\,\mathrm{m^2}$ of super-efficient panels to support you in Florida, whereas in Norway you'd need around $2000/85 \approx 23.5\,\mathrm{m^2}$. Both of these are doable as long as you live in a house rather than an apartment.

So basically, yes, taking 100% of our domestic power from Sunlight is entirely possible on the basis of how much energy is available. These figures don't include industrial uses, but there's more than enough power available for those as well, especially if you're willing to consider having extensive Solar power plants in the equatorial deserts instead of producing it all locally.

However, there are serious problems involved in storing that energy. It's not just that the sun only shines during the day, it's also that there's a lot more insolation in the summer than in the winter, especially in more temperate latitudes - and the energy is needed more in the winter. Cloud cover and day length both contribute to this seasonal variation. Batteries would be too large and inefficient to do the job for a single house, not to mention extremely expensive. So barring a major technological advance in energy storage, you'd probably still to do the storage in centralised plants even if everyone had their own local solar power generators. (E.g. by industrial production of hydrogen, or by pumping water into reservoirs, so you can recover the energy hydroelectrically when it's needed.)

This is another reason for envisaging large equatorial solar power plants. The sun is always shining somewhere on the equator, so with a global power grid you'd need a lot less energy storage. But of course this would be a huge mega-engineering project, and not without its environmental impacts, because of its scale, the amount of materials it would use, and the amount of land it would cover.

Well, as has been mentioned, it is really an issue of your consumption rate. This physicist here has already made the transition to solar power and storage, complete with detailed description and numbers. He's a bit evangelical, but several of his posts are quite interesting. But yes, with an emphasis on efficient appliances and sparing use, one can have modern amenities on a solar power supply. 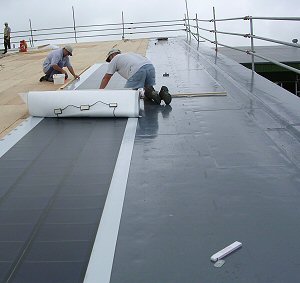 They could obviously cover walls too. So the answer is that yes, it can be done.

We just need to stop thinking in short sighted goals as coating the earth with solar panels; earth real estate is way more valuable that the energy density it can retrieve. Consider that at mercury orbit, the square meter of solar panel deployed in space might pay itself with the collected energy, even considering the inefficiencies of existing chemical energy conversion mechanisms for energy storage, such as water hidrolysis. Now that we know that mercury has ample water resources, this becomes a no-brainer

For energy production in earth surface, nuclear plants are way more green than the ecologist zealotry and propaganda would lead us to believe.

Well, what is your electric bill?

At 100% efficiency, you could theoretically produce $1.36 \frac{kW}{m^2}$ from solar energy . Check and see if the size your house/roof would cover your average consumption. If so, then with enough batteries to last you throughout the night that you charge in the day, that would work.

2
Limit on geothermal energy that could be extracted before the earth's magnetic field collapsed?
5
What type of solar energy technology has the most future potential?
4
How to calculate the temperature of a receiving point from concentrated solar power?