Mathematical segmentation of an accelerating body and the resultant torques

My question is inspired by problems of the following kind: 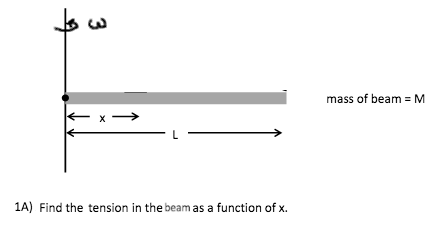 To solve such problems, what one essentially does is mathematically 'segment' the rod/body at a distance x from the pivot, and then write the force equations on the segment(s). In this case: 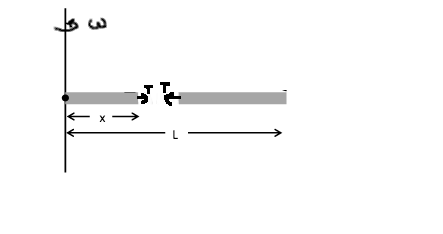 I found that this idea of segmentation raises some issues. For example, I wish to find the 'tension' at a point P in a uniformly accelerated thin rod (thickness$\to 0$) as shown below: 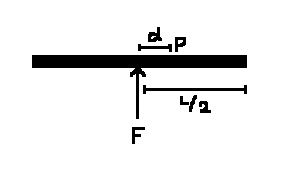 (The question seems sensible because I guess internal forces are responsible for all of the rod moving along with the CM.)

Segmenting the rod at P: Internal forces must have components perpendicular to the rod to ensure that the segments move in the direction of the net force. Since the rod is thin and there is no acceleration along the rod, there shouldn't be any 'shearing' forces either. 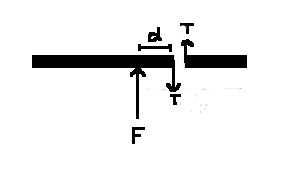 Here's the issue: This mathematical cut makes no sense to me, because it gives rise to seemingly unbalanced torques about the COMs of each new segment obtained. If the net force F were applied off-centre, for example, there would be a net angular acceleration, but the angular acceleration calculated for each segment would be completely at odds with $\alpha_{net}$.

So, a few questions:

1) Is this method valid at all? Can parts of a single object be isolated this way? Why/Why not?

2) What's going on in the case of the thin rod? (The weird torques)

What you are talking about here is shear and bending moment. What you label as T in your diagram is actually a shear force. In a beam, the weird torques you mention are called bending moments. There is nothing weird about them. They are what causes beams to bend under load. You can find detailed analysis of this kind of problem in an introductory strength of materials or mechanics of materials book. Probably a Schaum's Outline would suffice.

For this problem, we can change it to an equivalent static problem by adding a uniform downward force of strength $F/L$ which is the equivalent force on the beam uniform acceleration causes. This would be the equivalent problem of the beam balanced on a post with its weight uniformly distributed downward over the length of the beam and the post exerting an equal force upward at the center of the beam. To analyze the shear force we just look at one side of the beam. Call the left end $x = 0$. And as you have done, segment the beam at a distance $x$ from the left end. But we will just look at that one segment to calculate the shear force.

The shear force at the right end of the segment is the force necessary to balance the forces on the beam to the left of the cut. For $x <L/2$:

Over the beam we can write the shear force as:

where $\theta$ denotes the UnitStep function. 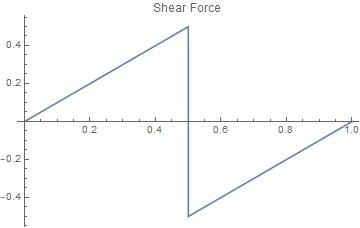 Similarly the bending moment (torque) is: 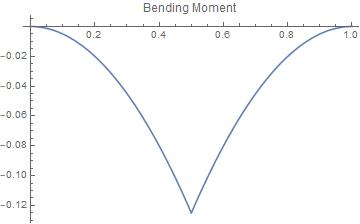 Another way to do it which to me is kind of slick is to write the load as:

where $\delta$ is the Dirac Delta fn. We can then calculate the shear from:

and the moment from:

Not the answer you're looking for? Browse other questions tagged homework-and-exercises newtonian-mechanics classical-mechanics rigid-body-dynamics or ask your own question.

2
Solving for motion of rotating rod using only Newton's laws?
1
Gravitational force between rod and a point mass?
0
What are internal forces and how do you calculate them?
0
Calculation of support reaction in rigid body rotation and collisions
2
Is net torque is not zero about all points on the rod for a linearly accelerating rod?
2
Torque on rolling cylinder
0
Understanding the internal forces in rigid body motion
0
How does inertia affect net torque?