Angular Momentum vs Moment of Inertia

Pretty sure that this question has already been answered in this site, but I cannot find it. Anyway, here's the question: What is the difference between angular momentum and moment of inertia?

The above is sufficient to recover the location of the path line, at least the point on the path of the particle closest to the origin.

In order to understand angular momentum of a rigid body rotating about the center of mass better, it is common to separate the geometry parts from the motion parts

More details in this similar answer.

Eventhough @ja72 contribuited with his answer analysing the physics of rotational physics, I would like to contribuite a bit in a more mathematical sense between the concept of moment of inertia and the mathematical object called tensor. Actually, the moment of inertial is the "freshman" encounter with tensors, because it's appearence is natural in Newtonian Physics. 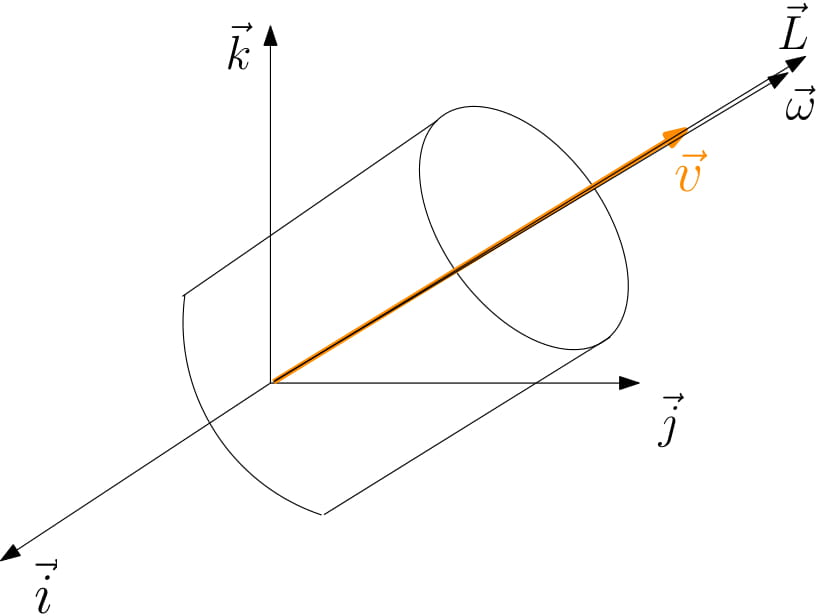 But in a arbitrary rotational motion, the contribuition of the moment of inertial of other axis will be appreciable and then the linear relationship $(1)$ have no meaning.

Instead the relationship is performed by another kind of physical quantity called Inertia Tensor:

Where components $I^{ij}$, are called components of inertia tensor. These components have a matrix representation called Inertia matrix or (unfortunately) Inertia Tensor:

The whole object $(2)$ is the real inertia tensor and tensors (in this case of rank 2) are objects which lies on a vector space called Tensor Product $V\otimes W$ (please keep this for all your academic life: the best (rapid) answer to the question "what is a tensor?", is "it's a element of tensor product".

Then, when we apply the tensor on angular velocity vectors, we get the vector called angular momentum:

In fact there's a minor technical (but crucial point) consideration on $(4)$: to perform a linear transformation like $(4)$, we have to define the object which have tensor components $I^{i}\hspace{0.3mm}_{j}$, i.e., an mixed tensor:

And then (in component form) we perfom a operation called contraction, which result the components of angular momentum vector:

Some references (For Tensors):

Not the answer you're looking for? Browse other questions tagged angular-momentum moment-of-inertia or ask your own question.

0
What actually is the vector of angular momentum?
0
Is $Fr = Iα$ a pure empirical or demonstrable truth?