Why does a tidal bulge result in a net torque on the Moon?

I understand that a tidal bulge is caused because the side of the earth facing the moon experiences a stronger gravitational force than the other. This results in the oceans on that side slightly bulging towards the moon. I am unclear how this results in the moons orbital radius increasing and why there is net torque on the moon. Isnt the gravitational force acting along the line joining the two centres of masses of the Earth and the Moon?

The rising and ebbing of the tides lags behind the force that drives it. Wikipedia explains it with a picture, though the picture, on top of being very much not to scale, shows a spherically symmetric Earth with no continents. The real situation is slightly more complicated but the average height of the sloshing is still off center.

(It's in fact a general property of driven oscillators that they lag behind the driving force, as seen in this image:

With a square-wave driving force it's easy to see why: the system has inertia and takes a while to respond to the new value of the force. But this happens with a periodic driving force of any shape.)

The off-center concentration of mass leads to a torque on the earth. This is easiest to see by looking at tidal-force field vectors: 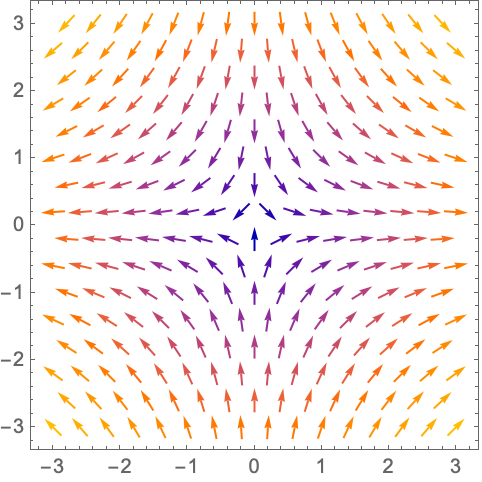 This shows the tidal effect of a body that's a long distance away on the x axis. If we stick the earth on this diagram, looking down on the north pole so it's rotating counterclockwise, then the bulge is predominantly in the upper right and lower left quadrants, where there is a clockwise torque. Therefore the torque acts to slow earth's rotation.

It follows from conservation of angular momentum that there's a matching counterclockwise torque on the moon (around the same axis). A more direct argument that it exists, though not that it has the same magnitude, is that the bulge nearer to the moon pulls the moon forward in its orbit a bit more than the bulge on the other side pulls it back.

Not the answer you're looking for? Browse other questions tagged newtonian-gravity angular-momentum astrophysics torque tidal-effect or ask your own question.

6
Where's earths death bulge, destroying everything in it's path?
228
Does Earth really have two high-tide bulges on opposite sides?
2
Torque due to tidal force
7
Relative size of the 2 tidal bulges
1
What happens to the water on the surface of the Earth if the Earth is not rotating about its axis in the Earth-Moon system?
0
Tidal forces between Moon and Earth
0
The role of the Sun in spring and neap tides
31
Does bottle water rise a little bit on full moon days?
0
NASA's explanation on tidal acceleration