Can two atoms be a crystal?

In the physics literature, you can often find the term "two-ion crystal", when talking about two ions that are confined in a e.g. Paul trap. How is this possible? Shouldn't a crystal be a structure which repeats in space multiple (>2) times? Otherwise, what are the necessary requirements to define something as a crystal?

Coulomb crystals are the structures formed by ions in a trap when they are sufficiently cold: once they stop jiggling around, they come down to equilibrium positions which need to balance the need to get down to the center of the trap, where the trapping potential is at its minimum, with the mutual repulsion between the ions.

This usually results in an orderly stacking of the ions, often with very clear local symmetries in a bunch of places. Here's one example, formed in an elongated ion trap (with experiment on the left and a simulation on the right; the lines are blurry because the whole thing is rigidly rotating about its vertical axis): 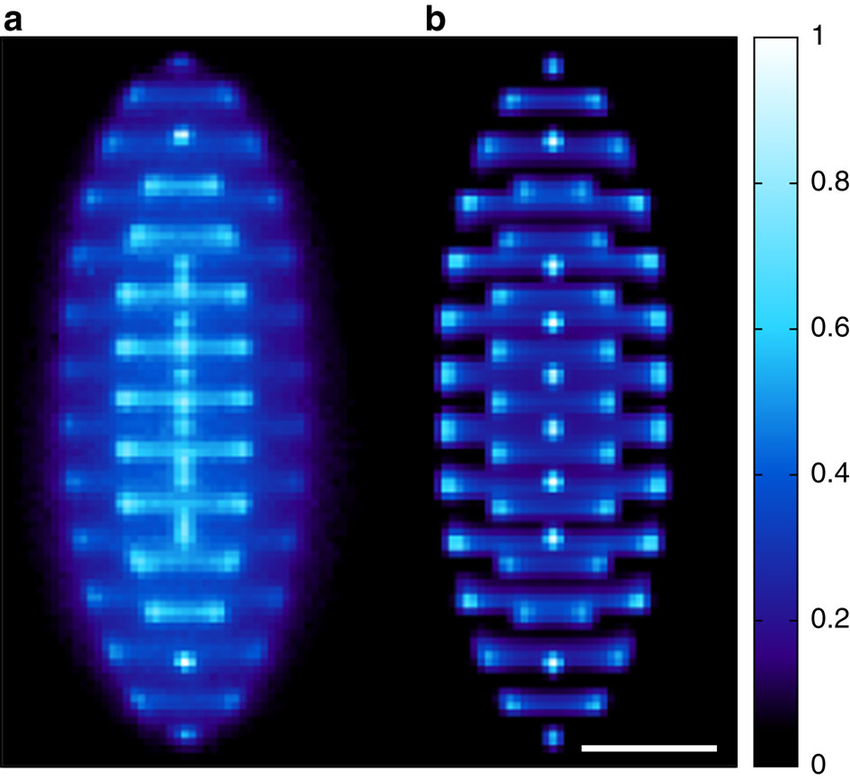 Within an ion-trapping context, the phrase "two-ion crystal" is a perfectly natural phrase to use for the case where you have coulomb-crystal dynamics, with a trapping potential and a Coulomb repulsion balancing out to give the equilibrium positions, and you have $N=2$ ions in the structure. If the phrase doesn't make sense to you, then that's just an indication that you're not within that text's intended audience.

Now, is the word "crystal" being used correctly here? The real answer is that it doesn't matter, at all: this is unambiguous notation, and lack of ambiguity is the single requirement that we make of notation.

Why can't it be? This is a matter of definition and whether one is comfortable or not with such a definition, which is determined by one's intuitive feel. Certainly, the papers authors are comfortable with it, otherwise they wouldn't use it.

To me, perhaps because of my affinity for theoretical mathematics and also computer programming, I see no problem at all with a crystal as having only one repeating unit. I tend to think of such a thing as being most similar to a mathematical set (though perhaps given the identical nature of the repeating units, a "multiset" might be the better choice if one wants to get strict), and a set can have one or even zero elements within it. That said, a "crystal with zero repeating units" is perhaps uninteresting physically, but mathematically even still makes sense, and moreover, a crystal can be abstracted into its set of lattice points which, as just that, a set, is entirely mathematically reasonable to consider as having 1 or even 0 points. In fact, from such a standpoint, the definition that admits 0 points can be "simpler" when one looks at how it is formulated in formal logic.

Moreover, two atoms constitute only a minimal repeating unit where and when the two atoms are different. If they are the same, then you have actually do have two repeating units in the "lattice".

Not the answer you're looking for? Browse other questions tagged solid-state-physics atomic-physics terminology crystals ion-traps or ask your own question.

2
Estimate the difference between two sets of atoms
2
Cesium chloride crystal structure
0
What is single crystal?
5
Choice of lattice for a crystal
3
On the number of spacetime atoms in a Calabi-Yau crystal