Does the strong nuclear force balance the electrostatic repulsions between the protons or does it overcome the repulsion?

I looked up on wikipedia and it says that the strong nuclear force is strongest of all the fundamental forces. Based on that i assume that it overcomes the electrostatic repulsions.

Now what if there are more protons than neutrons (or less neutrons than protons), in the nucleus? Wouldnt this mean that the electrostatic forces are stronger than the strong nuclear force?

If the electrostatic forces are stronger, what would happen to the nucleus? Would it break apart? (is it related to the stability?)

In addition to this, at what stage do we know (or by how much in the difference between protons and the neutrons) would cause the electrostatic forces greater than the strong nuclear force?

"Does the strong nuclear force balance the electrostatic repulsions between the protons or does it overcome the repulsion?"

This question is not worded very well. To explain that, let us consider the simplest systems containing just two neutrons or two protons. These systems do not have bound states. That means that the reason two protons do not have a bound state is not because the protons repel each other electromagnetically (remember that strong forces are pretty much the same for protons and neutrons, so if there were a bound state for two protons, there would also be a bound state for two neutrons), but because the strong force is spin-dependent, and two protons or two neutrons cannot have the same spin projections because of the Pauli principle, and the strong force between two nucleons with the opposite projections of spins does not enable a bound state. Remember that the system containing one proton and one neutron does have a bound state (deuteron) with the same spin projections for the neutron and the proton, as these two particles are distinguishable, and the Pauli principle does not extend to their system. Let me just add that at the distance of about 1 fermi characteristic for the strong force the electromagnetic energy for two nucleons can be orders of magnitude smaller than the energy of their strong interaction.

Neucear force obviously more stronger than electrical force but the range of strong nuclear force is about 1 fm where theoretically the range of em force is infinity.So if the size of atom is heavy(then obviously its size be big prportionally) then strong attractive force which created by neutron are not reach every corner of the neuclus which set in some limited spherical volume which radii are smaller than atomic radius...but every proton experience electrical repulsion by every other proton exits in the atom.So in this sense atom got very unstable due to electromagnetic repulsion and break off to create smaller atom where outward em repulsion may balance by nuclear strong attraction.So generally smaller size atoms are more stable than heavy atom. 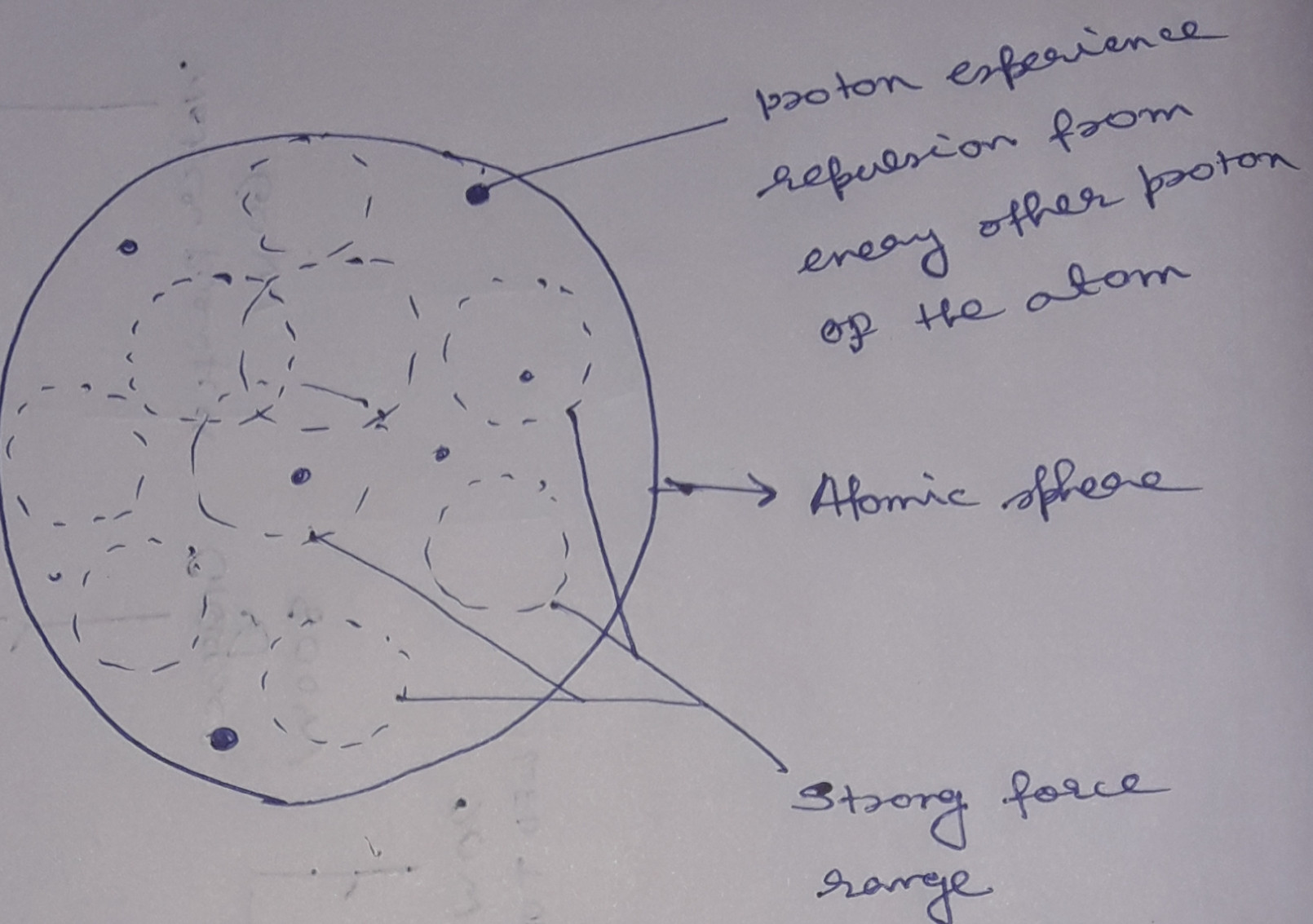 Not the answer you're looking for? Browse other questions tagged electrostatics nuclear-physics or ask your own question.

13
What do we know about the interactions between the protons and neutrons in a nucleus?
2
Electrostatic force has longer range than strong nuclear force?
2
Basic questions about the strong force
15
If the strong nuclear force is stronger than electrostatic repulsion, why don't nuclei collapse into a point?
0
Electromagnetic force between neutron and proton
0
In nuclear fission, how does the strong force get dominated by the electrostatic repulsive force?
0
formation of atomic nuclei from nucleons
0
Why does fusion above nickel 56 require energy?