When I plot the van der Waals equation of state in terms of Pressure (bar) versus density (mol/L) for propane at 400 K,

I get a very large negative value at $\rho=1/b$. I understand that this is because the first term becomes undefined at this value for the density but is there also a physical reason or understanding as to why the equation fails to model propane accurately?

Also, past the critical density of $\rho_c=5 molL^{-1}$ it does not accurately model propane, why is this? 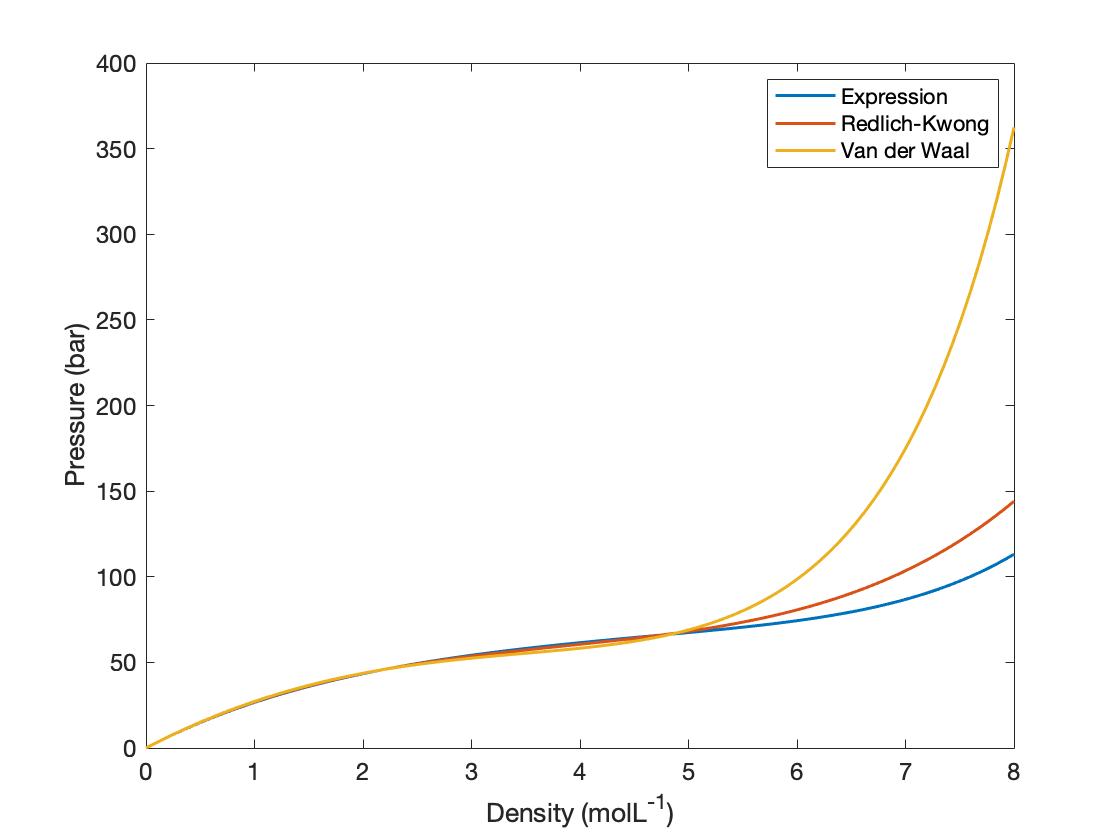 The Van der Waals equation is a model. It's popular because it gives physically realistic predictions without too much work, but it's rarely used in serious modelling because it doesn't describe real substances with especially good accuracy. Overall: it is not surprising that the model doesn't model propane correctly as there really isn't any substance that the model describes especially well at all conditions.

The $b$ term in the Van der Waals equation represents the volume of the particles (which is treated as zero in the ideal gas law). As you observe, $P\rightarrow \infty$ as $1/\rho\rightarrow b$; this represents the fact that, once there is no space between the particles, no amount of force can shrink the system further (the model assumes that the gas is composed of infinitely hard particles). If propane followed the Van der Waals equation exactly we would find that $b = \frac{1}{3\rho_c}$ i.e. the density of the particles themselves would be $3$ times the critical density.

As $\rho \rightarrow 0$, the behaviour of real gases, Van der Waals gases, and ideal gases all converge. All reasonable models should agree in this limit. As $\rho \rightarrow \infty$, non-ideal behaviours become more significant and the three models begin to diverge. For the isotherm that you plotted, the difference between the real pressure and the prediction of the Van der Waals model begins to grow very quickly around $\rho = \rho_c$, but to my knowledge this is just a coincidence. The exact point at which the model breaks down is likely different for different isotherms.

Not the answer you're looking for? Browse other questions tagged thermodynamics statistical-mechanics kinetic-theory gas or ask your own question.