Relativity from a basic assumption

Is it possible to derive Lorentz transformations just by assuming that if two spaceships are moving away from each other with a constant speed, it is impossible for them to tell who is moving, even if they can exchange light signals. (speed of light is assumed to be a constant). It seems to me that is shoud be possible, but to my surprise I have never seen such a derivation

(a) The first important fact you need to prove anything about the Lorentz transformations is that they are linear. Linearity is logically equivalent to the following conditions: (under the transformation),

With this, we know that we can use a matrix to write down the Lorentz transformations. Which matrix?

This is possible by considering invariant features under a boost, i.e. from the principle of relativity -- the obvious invariant is as follows: if you had emitted a light ray $a$ seconds in the past, it reflects off some object and returns to you $a$ seconds in the future, it was on your x-axis at time 0. 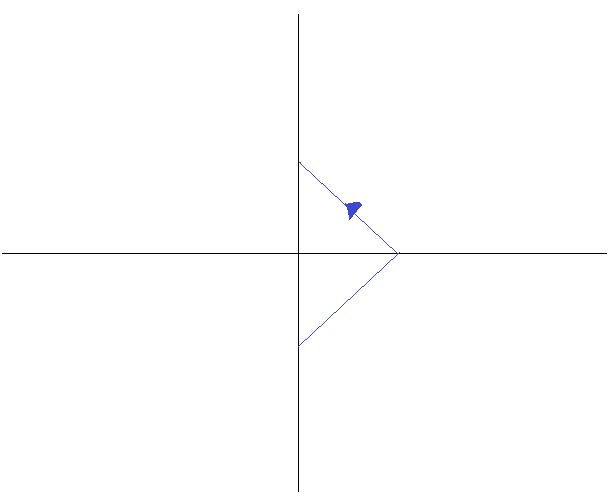 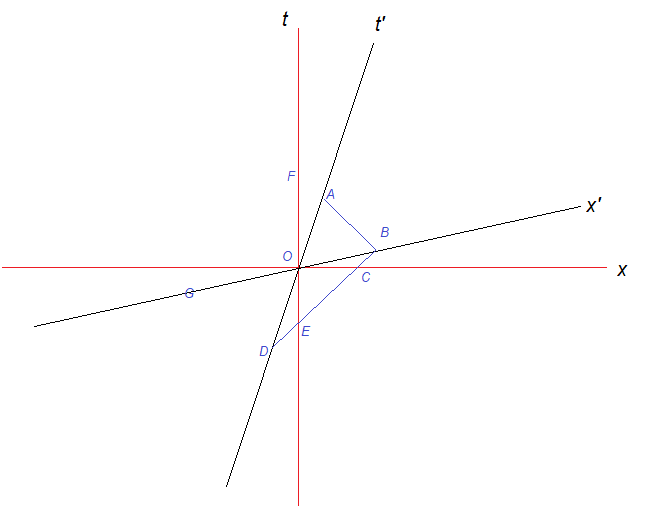 And it's easy to prove, by drawing an appropriate circle, that the two tilts are equal.

(c) We now know the lines the column vectors of our matrix land on -- they are multiples of $(1, v)$ and $(v, 1)$, but which vector on that line exactly? In other words, what's the scale on the axes? This requires one extra assumption: if you boost into the frame with velocity $v$, then boost $-v$ back, that's equivalent to not boosting at all, i.e. $L(v)L(-v)=I$. Then it's just computation:

Then the change of basis matrix is simply the inverse of this matrix, which is:

(d) There's still one final step, however -- we need to verify that $y$ and $z$ aren't transformed under the Lorentz boost. To prove this, consider two twins with paintbrushes running towards each other, painting the wall at waist level -- if the orthogonal axis were transformed in any way, each twin would see his paint-streak as above the other's -- the fact that the paint-streaks' relative positioning can't be different can be seen, e.g. from supposing that the two paints cause an explosion in the mix. The fact that the presence of explosions (or any boolean quantity) is invariant under Lorentz transformations is a consequence of the principle of relativity.

The first two are the assumptions you wanted. As far as I can see, the last assumption can't really be proven from the other two -- it requires some sort of symmetry principle. But that's okay.

The Lorentz transformations were originally derived by Lorentz and Fitzgerald as the symmetry group that leaves Maxwell’s equations invariant. (This isn’t easy to see in the way they’re written using vector notation as the symmetry is not manifest).

Einstein didn’t actually derive the Lorentz transformations; what he did was made classical mechanics consistent with this symmetry group, this is Special Relativity.

Not the answer you're looking for? Browse other questions tagged special-relativity coordinate-systems inertial-frames observers lorentz-symmetry or ask your own question.

6
Does the derivation of the Lorentz transformation depend on space having at least two spatial dimensions?

3
Time dilation derivation of special relativity
3
Explanation for a much simpler version of the twin paradox?
2
Applying Lorentz Transformation
1
Invariance of spacetime interval directly from postulate
0
The derivation of the Lorentz transformation: addition of distances