In quantum mechanics, in general, it is stated that the act of measurement changes the state of the system. For example, consider the following Stern-Gerlach setup;

However, in the above experiment, we made a selection at the end of each apparatus; namely, we only allowed atom having spin $+z/+x$ to pass through the next stage, so consider the following; 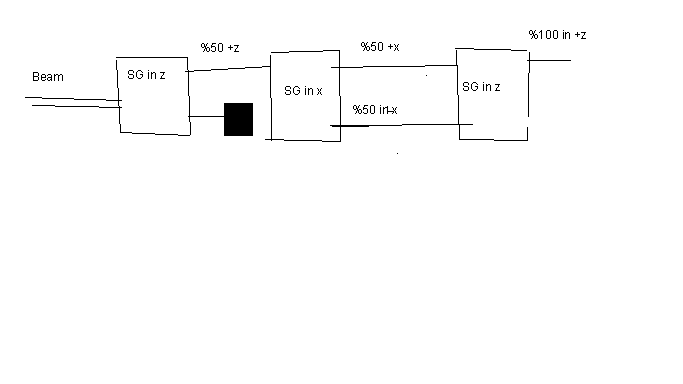 In other words, in this case, we allow the atoms coming out from $-x$ direction pass to the next stage.

In this case, the act of measuring the $x$ component of the spin will not "erase" the information about the $z$ component (this experiment is explained in the QM lectures in ocw.mit.edu), so isn't the statement "the act of measurement changes the state of the system" wrong in general ?

Note that, in here, I'm consciously sending both output of $SG_x$ to the same $SG_z$ apparatus.

But there's nothing here that would force us to treat the outcome of the $x$-aligned SG apparatus as anything but an equal superposition of $\lvert -x\rangle$ and $\lvert x\rangle$, i.e. it's still just a $z$-spin eigenstate. Unless you introduce something in one of the two paths for the $x$-spins that distinguishes them, you're not forcing this superposition to resolve to a state with definite $x$-spin, and therefore you're not measuring the $x$-spin.

Actually, there is what is called preparing a system and this means we fix the system to be in a definite state. This is done by measuring the system since this means that after the measurement it will be in the eigenstate associated with that measurement.

Not the answer you're looking for? Browse other questions tagged quantum-mechanics quantum-spin measurement-problem quantum-measurement or ask your own question.