In the figure shown below, a laser sends a continuous stream of a large (almost infinite) number of photons per second at a double slit, and the photons are then are displayed on a screen. 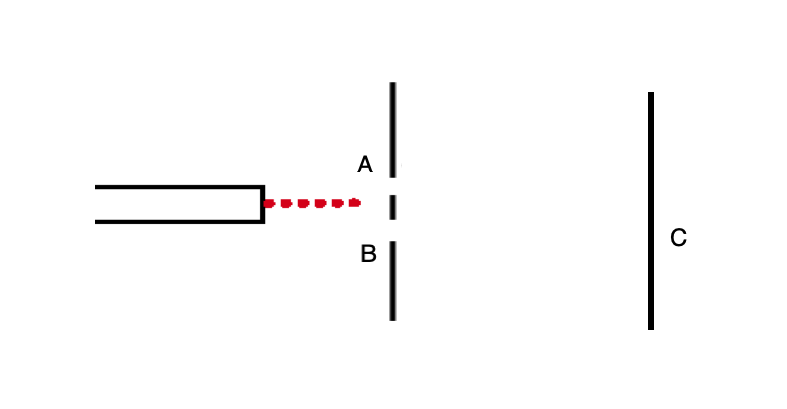 The upper slit is A and the lower slit is B. C is a point on the screen exactly opposite B. The distance between the slits and the screen is adjusted such that at C, there will be a bright pattern if the A slot was closed (ie clump pattern) and dark band (from an interference pattern) if both A and B are open. A, B, and C form a right triangle.

A and B are initially open and we see an interference pattern on the screen therefore C is dark. At a specific time we now close the slit at A. The very next photon (which is just in front of the slits) then will have its wave function collapse instantaneously and will only go through B. This photon will take some time to arrive at C. The time it takes is the distance from B to C divided by the speed of light. But since the BC distance is shorter than the AC distance, the information that the slit at A was closed arrives faster than light speed which should normally take distance AC divided by the speed of light. How am I wrong here?

There is something called a photon wave function so that the photon or energy in the EM field is seeing all possible paths between source atom and receiving atom. On the time scale you are referring to there is no fast way of closing A compared to how fast the photon evaluates its paths. As you are closing A they are already deciding to go to B and some have decided to sneak thru A at the very last possible instant.

Not the answer you're looking for? Browse other questions tagged quantum-mechanics double-slit-experiment interference coherence or ask your own question.