Why does air move from higher to lower pressure?

Somebody answered this question elsewhere and said it's because there is a higher force acting at the high pressure region compared to the low pressure region so a net force pushes it towards the lower pressure region. My problem with this is that pressure is a scalar quantity, not a vector, from what I understand. So how do we know which direction the air moves in the high pressure region? If anybody could also link a diagram showing this that would be helpful as I'm having difficult visualising this. Thanks.

A good way to look a this is thinking of the gas as composed of many small particles.

In this context, air pressure is proportional to the amount of molecular collisions per unit area per unit time of the medium on its walls.

So, if you have a wall separating a higher pressure air from low pressure air, more particles will be colliding on the high P side than on the low P side of the wall. (see picture). 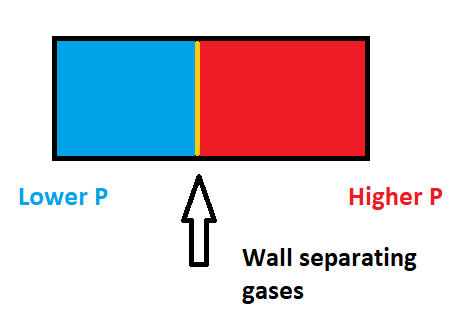 If the wall is removed, the particles won't collide with the wall and will just fly through it. Since the number of collisions per unit time is higher on higher P side than on the low P side, it is natural that there will be a net flow of particles towards the low P side, until the pressure equilibrates on the entire volume.

The Navier-Stokes equations of fluid flow can be written as $$\rho\left [ \frac{\partial v}{dt}+(v\cdot \nabla) v \right ] = -\nabla P + \rho g + \mu \nabla^2 v.$$ The left side is basically the "$ma$" in Newton's equation $F=ma$, and the right side is the total force. The first term is the pressure term that interests us, the other two gravity and viscosity.

$\nabla P$ is the gradient of the pressure, turning the scalar pressure field into a vector field. It can be viewed as pointing in the direction of the greatest rate of increase of the function. This is a hint of what is going on: what matters is not pressure, but pressure differences. Regions with constant pressure do not cause wind, but if there is an imbalance of pressure then air will move to reduce it, and hence flow along the (negative) gradient until the pressure difference is removed.

Thermodynamics to the rescue. Forget the sun, the earth's motions, the effects of altitude, etc. Think of two reservoirs of a monomolecular gas, equal in volume (keeping it simple!) but A is of higher pressure than B.

Connect the two with a valved tube, and open the valve. The pressure equalizes simply because there are initially more molecules in A to make their way into B than vice versa. Statistical mechanics in its crudest form. More precisely, B, which permits longer mean-path lengths, has become available to the higher pressure gas in A, and the pressure equalizes through a macroscopic transfer of gas, based on the statistical understanding of the motions of trillions of trillions of identical particles. This happens more or less rapidly depending on the cross-section of the throat of the valve.

Notice that I have nowhere described the process of diffusion.

One might say of this that initially there was lower entropy, thus work could be extracted, and was-- the work of equalizing pressure. Or one could invoke the equipartition theorem, which states that Entropy will have her way: energy gets parcelled out equally to all degrees of freedom. The Navier-Stokes equation, abstruse and elegant as it is, is the exfoliation of some entirely commonsense notions. The gas laws follow rather more directly.

Thermodynamics, or statistical mechanics, is often- or perhaps always-- the basis of a branch of physics. The Dutch physicist Verlinde derived Newtonian mechanics from thermodynamics! And I am sure that more work like his will be done.

And I notice that an even simpler answer has been entered while I was dithering with grammar! My complements.

My problem with this is that pressure is a scalar quantity, not a vector, from what I understand. So how do we know which direction the air moves in the high pressure region?

$\let\rho=\varrho$ I think you are asking for a more fundamental answer, at a classical macroscopic level. This I'll try now.

You're perfectly right, pressure is a scalar. Even though, from a more sophisticated viewpoint, it could be called an "isotropic tensor". Quite intimidating, but conveying a more basic meaning of the concept.

What is meant is simple. Let's view on an example. Suppose you have a tank filled of water. Take a solid cube, tie it to a wire and drop it into the water, leaving it suspended at half height. Assume two faces of the cube stay horizontal, the other four vertical.

Because of pressure water pushes on all six faces. It's a property of fluids (liquids and gases) discovered by Pascal that the force on any face is always perpendicular to that face and its intensity is $F = P A$ ($P$ pressure, $A$ face's area). This remains true if also you rotate your cube in any direction.

I've just stated the famous Pascal's principle. You may well take it as an experimental truth.

Note that I've written $P$ for pressure, tacitly assuming its value is the same everywhere. If it's so, net force of water on cube is obviously zero, since forces on opposite faces cancel each other. But I expect you to protest: "Hey, I heard of buoyancy, of Archimedes' principle. Where did it get lost?"

You're absolutely right, and I pretended of forgetting all that to the benefit of my presentation. Of course it isn't true that pressure is the same everywhere. It isn't if water is resting in a gravitational field, as we are accustomed to see. Maybe you know of another fundamental law of hydrostatics: Stevin's Law: $$P = P_0 + \rho g h$$ where $P$ is pressure in a point at depth $h$ under water's free surface, $P_0$ is the atmospheric pressure just above water, $\rho$ water's density, $g$ the intensity of gravitational field (assumed uniform).

We have retrieved, for this special case, Archimedes' principle.

So let's substitute atmosphere for our water tank and in place of a solid cube consider a small air volume, only ideally separated from the rest by a closed surface in form of a cube. If for some reason it happens that pressure on opposite sides (e.g. a couple of vertical sides) is not the same then on that air cube a net horizontal force will act, from the higher side towards the lower one.

We're only left to apply 2nd Newton's Law to conclude that the air cube will be accelerated from high pressure towards low pressure. You were already warned in other answers that things in the atmosphere may not be so simply treated - there will be other forces, first of all friction, then the "mysterious" Coriolis' force. Actually it's very rare that air moves straightly from high to low pressure: more frequently it goes on spiraling around high or low pressure regions (viz anticyclonic or cyclonic regions) with a diverging (for anticyclon) or a converging (for cyclon) component.

Here is an easy way to think of this.

The atmosphere is an ocean consisting of air and its depth and density determine the pressure we measure all the way down at the bottom of that ocean, where we live.

Since cold air is denser than warm air, a region of the atmosphere consisting of cold air will be slightly heavier than the (warmer) air surrounding it and hence will tend to sink towards the bottom of the ocean and spread out underneath the warmer air around it.

In addition to this, the air ocean has currents in it like the water ocean does, and those currents sometimes collide and pile the air ocean up to a slightly greater depth in that region. the pressure we experience down at the bottom underneath one of those pileups will be greater than normal, and the pileup strives to sink down under its weight and spread out against the bottom.

6
Does something like Pascal's Law apply in a Swimming Pool? If not, how does pressure spread?
0
Confusion with pressure
1
How do buoyancy and pseudo forces combine?
6
Yet another airplane question
0
Excess Pressure Inside A Liquide Droplet
0
How does pressure act evenly in all directions in interactions between solids?