Is a stable orbit possible inside the ergosphere of a Kerr (spinning) black hole?

I have heard that it's "impossible to hover" inside of an ergosphere, but everywhere I read this seemed to be speaking in the context of "relative to a stationary observer outside of the ergosphere". The explanation for this is that objects inside the ergosphere are forced to "co-rotate" with the black hole, although I'm unsure if this means

One paper on the topic's abstract includes phrases like

For certain parameter values there are also orbits inside the inner horizon not reaching the center.

All negative energy orbits enter the horizon of the black hole. (As opposed to orbits that do not?)

which seems to indicate stable orbits are possible.

For simplicity let us restrict ourselves to the discussion of orbits in equatorial plane, since this situation is most readily admits analytical treatment. For reference we are going to use the paper:

The motion in an equatorial plane of a Kerr black hole is characterized by two integrals of motion: energy and angular momentum (per unit mass of the orbiting body). The equation governing the evolution of radial coordinate $r$ with time could be seen as a solution of a 1D problem, motion of a point in a given effective potential, while the angular momentum conservation would give the evolution of an angular variable. This solution algorithm is mostly the same as with nonrelativistic (Kepler) problem as well as the nonrotating, Schwarzschild black hole, except the expression for the effective potential is much more complex.

Remember that in Schwarzschild black hole stable circular orbits are only possible in the region $r>3r_s$, the radius of the so called innermost stable circular orbit (ISCO), while in the range $1.5 r_s < r < 3r_s $, from photon sphere to the ISCO there are unstable orbits. So, the intuition one might have about structure and stability of orbits in a Newtonian case does not necessarily translate to highly relativistic orbits near the horizon.

This dependence of orbital parameters on the black hole spin could be illustrated by the following image (figure 5 of the cited paper): 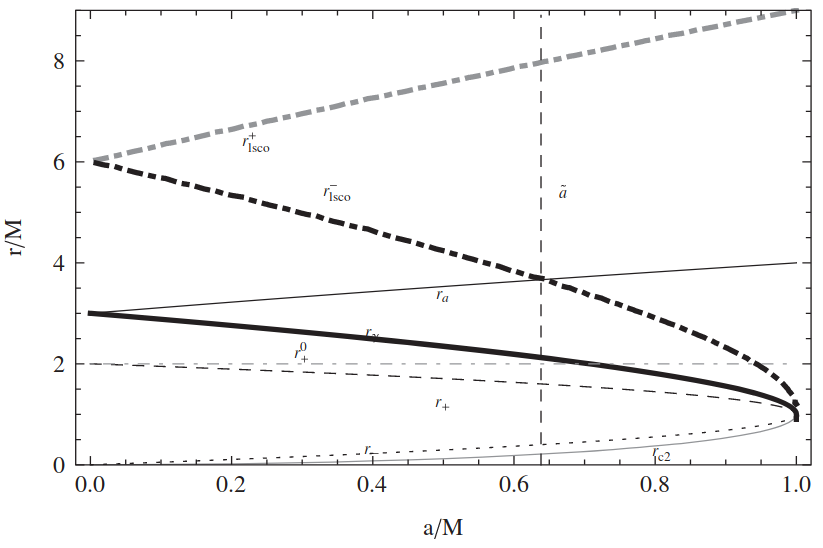 Orbits are possible, but not all of them are necessarily stable (the latter is only the case when Vr"(r)<0), if you disturb them the particle might either plunge or fly away, see Leo Stein's site for a plot of the innermost stable orbits in dependance of the spin. Here is one of the photon orbits inside the outer ergosphere (but still outside of the horizon) at r=1.448 and an observed equatorial inclination of 17.5° around a maximally rotating black hole with a=1 (for all possible photon orbits in this configuration click on the image): 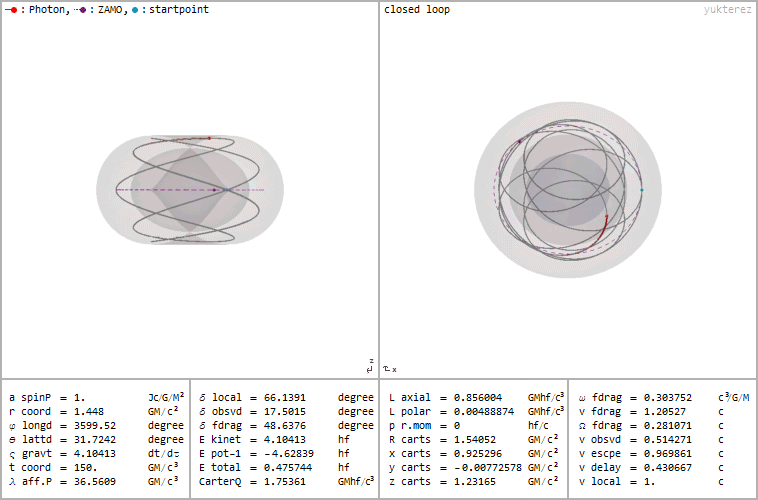 You can also have orbits inside the inner horizon if they are still outside of the inner ergosphere. It's not possible to reach such an orbit in free fall, but you can get there if you have propulsion. The real problem would be to get through the Cauchy horizon undamaged, because if you enter at the wrong angle you encouter infininte blueshift before entering the stable region. Also the total energy of the particle (kinetic+potential+restenergy) becomes negative, here you have an example of a test particle in a circular orbit inside of a black hole with spinparameter a=0.99 at r=0.429 with energy -0.136 and a local velocity of 0.189c:

The black holes in this animations rotate counterclockwise (from West to East), the testparticle's trail goes in the opposite direction because the local velocity is retrograde although it looks like prograde due to the frame dragging. The coordinates are Kerr Schild, so the time coordinate t is finkelsteinlike.

The escape velocity in the display of the second image is of course not the velocity needed to escape the black hole (which is by definition not possible), but if you manage to get through the Cauchy horizon without getting roasted by infalling and blueshifted photons you could at least in theory escape the white hole backdoor, see Hamilton's diagrams. For other possible orbits inside rotating and/or charged black hole see Dokuchaev's work on the subject.

Not the answer you're looking for? Browse other questions tagged general-relativity black-holes orbital-motion event-horizon kerr-metric or ask your own question.

1
Is it possible to flyby a black hole at a distance of 1 m from event horizon and come back?