Why does angular momentum being constant prove Kepler's first law?

So I was watching this video and this video on Kepler's first law in order to understand the proof of Kepler's first law. He started off by saying that for an ellipse, the distance from a focus point to a point on the ellipse equals to $$r = \frac{a(1-\epsilon^2)}{1+\epsilon \cos(\theta)}$$ (where $\epsilon$ is the eccentricity, $a$ is the semi-major axis and $r$ is the distance). He then proceeds to take the derivatives of the polar unit vectors and derives acceleration in polar coordinates in order to use in Newton's second law.

He then equates Newton's second law to the gravitational force and substitutes $mr^2\frac{d\theta}{dt}$ for angular momentum. After some calculation and substitution, he gets to the point where $$L^2=GMm^2a(1-\epsilon^2)$$ ($a$ is the semi-major axis and $\epsilon$ is the eccentricity) and he says it is done because the angular momentum is constant. I don't really understand the reasoning behind this, could someone please explain?

Also, am I correct in saying that the orbit must be elliptical because if $\epsilon$ was greater than $1$, $L^2$ wouldn't exist. Or is it because of something else that I'm missing?

if we multiply equations (1) from the left with $r$ we get:

the angular momentum is equals $2m$ times the area velocity.

The solution of equation (2) is:

comparing equation (3) with a standard polar equation of ellipse:

That's a fairly clever argument. It's important to point out that it isn't a proof that all solutions of the equation of motion are described by ellipses, but it does show that some ellipse-shaped trajectories are solutions to those equations. The precise claim that's being proved is this one:

Along the route of that differentiation, you use the fact that $\theta(t)$ is a solution to the ODE in $(2)$ several times. Since that ODE is the flesh and bones of angular momentum conservation, this means that insofar as your question asks

where in the argument is the conservation of angular momentum used,

the answer is: all over the place. None of the proof makes sense without it, and it does not just reduce to the simple numerical relationship $L^2 = GMm^2 a^2(1-\epsilon^2)$ between the constants that's obtained at the end, which is a very minor part of the argument.

If you want to see why this is the case, you should repeat the whole argument without assuming that the angular momentum is conserved: that is, when you substitute for $\dot\theta(t)$, you should do so as $$ \dot\theta(t) = \frac{L(t)}{mr(t)^2}, $$ with a time-dependent angular momentum, and then when it comes time to differentiate again, you should include the correct product-rule term with the time derivative $\dot L(t)$. When you get to the end and you try to show that your solution satisfies the EOM, you'll be pulled short, since you don't know anything about $L(t)$ or its time derivative $\dot L(t)$, and you won't be able to say anything at all about the relationship between your function and the EOM.

Hopefully this helps clarify the structure of the argument.

*you might wonder, at this point, why this argument uses such a cumbersome definition for $\theta(t)$. The reason is, basically, that the ODE $(2)$ cannot be solved exactly: if I understand correctly, it can be 'reduced to quadratures' (i.e. you can express the inverse of $\theta(t)$, often denoted $t(\theta)$ as an integral of a certain elementary functions) but that integral cannot be done analytically, and it cannot be inverted. So, that procedure shows that the function exists, it's just too cumbersome to write down.

Kepler's first law may be simply stated as such: "All planets move about the Sun in elliptical orbits, having the Sun as one of the foci."

and he says it is done because the angular momentum is constant. I don't really understand the reasoning behind this, could someone please explain?

Clearly, the first part of the Law is satisfied - the orbit is generally eccentric. The angular momentum is indeed constant for bound orbits, so this is a sufficient condition to get bound orbits; the equation you cite for $L^2$ is essentially an implicit equation for $a$ and $e$.

Technically, the Center of Mass of the system is located at one of the focii, but the Sun is so much more massive than any of the planets that the Sun's location is essentially at the Center of Mass - so the Sun is at the focus. This more rigorous derivation here shows that the orbit takes the form of an ellipse (the very last equation), where the COM is at the focus which is essentially the position of the Sun.

Also, am I correct in saying that the orbit must be elliptical because if ϵ was greater than 1, L2 wouldn't exist. Or is it because of something else that I'm missing?

When $e > 1$ the orbit is indeed unbound, but it's also that case that $a < 0$ for unbound orbits, making the orbital angular momentum positive definite (and real valued). Note that if I take the square root of a negative number, it doesn't mean that it "doesn't exist," rather it just produces a complex number, but that's not the case here since $L$ remains real valued.

The attached figure gives a simple proof that an ellipse is a solution of the equation of motion, by using both polar and cartesian coordinates and the conservation of angular momentum. 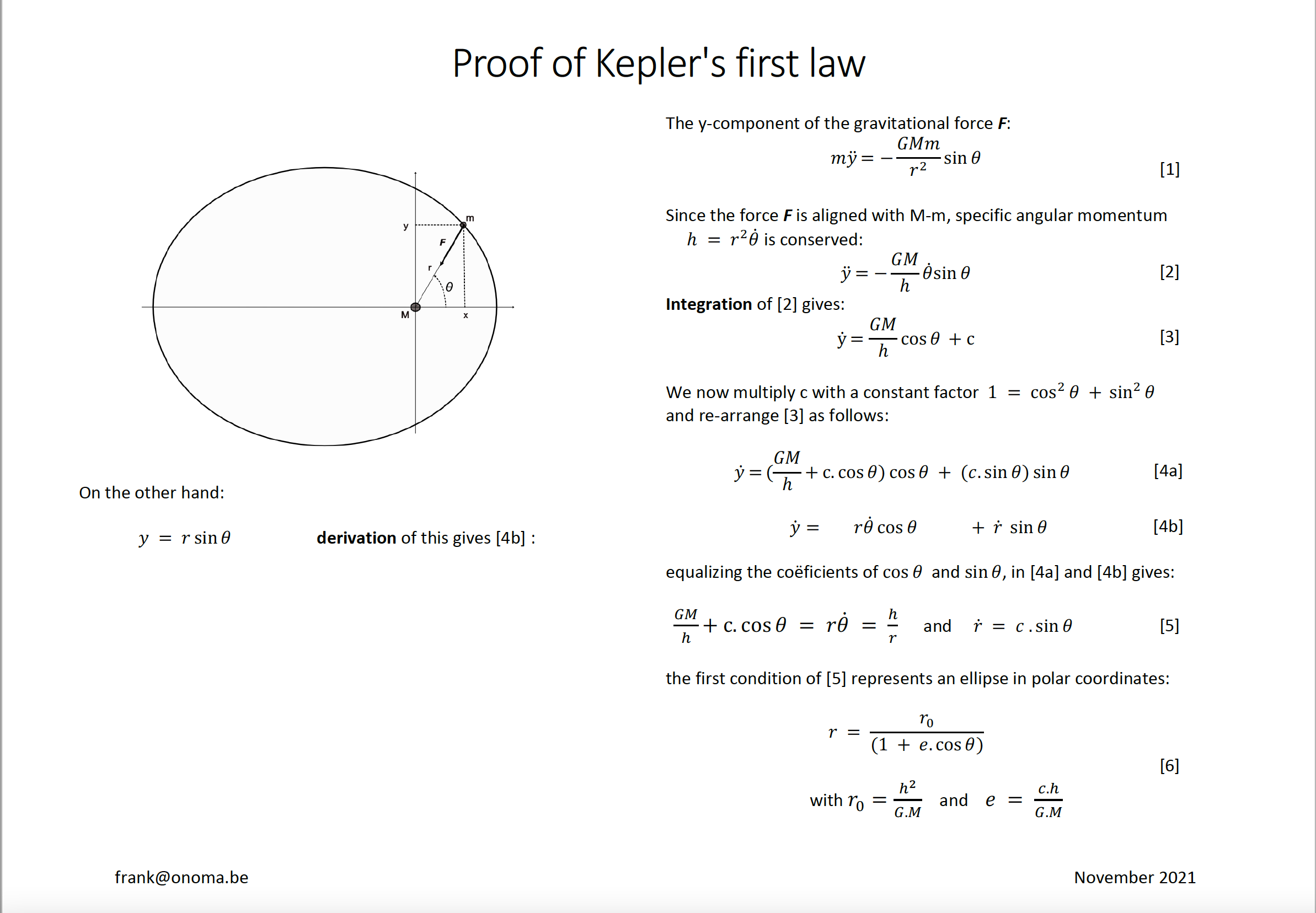 Not the answer you're looking for? Browse other questions tagged angular-momentum orbital-motion planets moment-of-inertia celestial-mechanics or ask your own question.