Did the rapid inflationary expansion slow down a lot because the inflaton field had decayed, or because of gravity from matter/radiation?

What happened to the rate of expansion right after inflation ended?

Did the rapid inflationary expansion slow down a lot because the inflaton field had decayed, or because gravity from matter/radiation gradually decelerated the rapid expansion?

Actually my question is about the rate of expansion right after inflation ended when the field reach the bottom of the potential.

For the rate of expansion (the Hubble parameter) just take c over the Hubble radius: 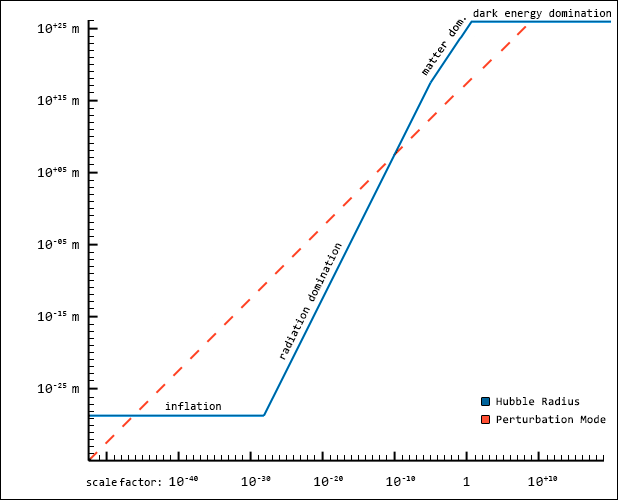 That number might vary depending on the specific model, but at least the order of magnitude is in that range.

No, inflationary expansion did not “instantly turn into non-inflationary”. This epoch ended when the huge potential energy of the inflaton field started to decay into matter particles and radiation, a process which is called reheating. Before reheating the universe expanded exponentially and thereafter decelerated. Most physicists agree on this model. As far as I can tell the era where reheating happened was very short but certainly not zero.

For example, a simple and classic model (but one no longer used in inflationary models) is the “Mexican hat” potential, $$V(\phi)=a(|\phi|^2-b^2)^2.$$ At high temperature, the field has the value 0 and the nonzero potential energy drives inflation. As the field evolves toward a value with $|\phi|=b$, the potential energy gradually drops to zero and inflation gradually stops.

Update to new questions posed by OP on 1/29:

Did the rapid inflationary expansion slow down a lot because the inflaton field had decayed, or because gravity from matter/radiation gradually decelerated the rapid expansion?

Inflation slows down and stops because the inflaton field decays.

Neither. Inflation gradually turns into non-inflationary expansion because the inflaton field decays. Nothing happens instantaneously in this process.

Not the answer you're looking for? Browse other questions tagged general-relativity cosmology space-expansion or ask your own question.

0
How do we know what happened during the Planck epoch era of the big bang?

0
Is Dark Energy A Constant?
2
What caused the expansion of the universe to slow down after the inflationary epoch?
4
Attractive gravity has negative energy, what about repulsive gravity in the inflation phase?
4
When did matter/energy come into existence? Before or after the CMB?
4
The quantum nature of primordial density perturbations and how do they affect densities of radiation/matter dominated epochs?
3
Reheating and the Horizon Problem
1
After inflation ended, did the expansion slow down to non-inflationary expansion because of gravity?
0
Discontinuity at the transition between the inflationary and radiation-dominated universe
0
Cosmology: Inflation, rate of expansion over the first few years