Can a balloon float into space? (+orbital velocity)

After watching the recent "space jump" a question arose. Why can a balloon not float into space? Can one be made/designed to do this?

Next, everything in orbit is falling back to earth. It only maintains its altitude with speed, about 26,000mph give or take. This number means what, 20,000+ mph relative to what?

If the shuttle or station was to stop or approach zero mph it would fall to Earth, right? The balloon was at 128,000 feet and was only traveling at the Earth's rotational velocity of 1600mph. As viewed from the ground zero mph since it came down almost in the same stop. So what happens between say 130,000 feet and space that you need to increase your speed by 24,000mph?

Last if we were at a high enough orbit and "stopped", where we would not fall back to Earth, would we be able to watch the earth leave us. Could we wait there for a year for the Earth to return? How far out would this be?

1) Why can't a balloon float into space?

A balloon rises because it is filled with a gas that is less dense than the air surrounding the balloon. Roughly speaking, the atmosphere gets less dense the higher up you go, so the highest altitude your balloon can reach is simply the altitude where the density is the same as whatever you filled your balloon with... sort of.

The above is true if most of the mass of the balloon is in the gas filling it (rather than the balloon envelope, or anything you might want to carry with the balloon). But if what matters is the density of the balloon-filling, then the ideal balloon would be filled with nothing (vacuum). This balloon could, naively speaking, take us up to an altitude where vacuum exists, or in other words, to exactly the edge of space. The trouble is, the vacuum needs to be wrapped in the envelope of the balloon. To contain a vacuum without collapsing, the envelope has to be pretty sturdy and, with known materials, this means it has to be pretty massive. This extra mass means the balloon's maximum altitude is lower - wherever the buoyant force provided by the balloon is balanced by the gravitational force of the Earth pulling down on the envelope. So an ideal balloon with a rigid massless envelope and filled with vacuum can carry us to space, but practical considerations and real materials means that the limit for balloon flight is inside the atmosphere.

3) Why doesn't a balloon need to move so fast to rise?

Hopefully it's clear by now that the balloon and the orbiting ball are "held up" by entirely different mechanisms. The balloon uses buoyancy, while the ball is in some sense supported by its own motion.

4) Can we get high enough, "stop" and watch the Earth leave then come back in a year?

The short answer is no. First, can we get high enough to be able to stop (i.e. have 0 velocity relative to the Earth) and never fall back to Earth? If the Earth were the only thing in the Universe, then this would be impossible because no matter how far you go, you can't escape gravity, its range is infinite. It might take a while, but gravity would eventually pull you back. The only way to get around this inevitable consequence is if there is something else out there pulling on you harder. For instance, in the Solar System, there is a place between the Sun and the Earth where the gravitational attraction from each is equally strong. Get a bit closer to the Sun from here, and you'll never fall back to Earth - you'll fall into the Sun instead. The same idea applies in the other direction - depending where you go, you might end up headed for another planet, another star or another galaxy entirely. The details of what exactly happens can be really complicated because the Sun, Earth, other planets and stars are all moving relative to each other and interacting via gravity as well. Could we stop and watch the Earth come back in a year? I think this question makes more sense if we try and stop relative to the Sun (to stop relative to the Earth would mean putting ourselves on the same orbit as the Earth around the Sun, so we would just follow our planet around). If we did this, we could indeed watch the Earth go around the Sun for a year. But it wouldn't be easy, because we'd have to provide a constant thrust away from the Sun to avoid falling into it. The only other answer to this question I can think of would be to leave the Earth, traveling in the opposite direction along its orbit at the same speed, and meet up with it in 6 months on the other side of the Sun. This would require relatively little effort because once you get into a (stable) orbit, you don't need to provide any extra effort to stay on it.

A comment on one of the other answers brought up equilibrium points between planets/other bodies. It's true that there is a point between, for instance, the Sun and the Earth where the attraction from each cancels the other. The trouble is that if you move a little bit away from this point, you start to feel a pull and accelerate away from the equilibrium (it's an "unstable point"). And moving a little away from this point is inevitable; sitting between the Earth and the Sun for instance, Jupiter still exerts a significant force and will nudge an object off the equilibrium point fairly quickly. Still, putting an object at an equilibrium point and keeping it there is a LOT less work than putting it anywhere else. I'll point out one last complication about equilibrium points: because the Earth is orbiting the Sun, the equilibrium point between the two is ALSO orbiting the Sun, with exactly the same orbital period. Like it or not, to maintain a stable position in space, you either have to do a lot of work, or orbit something. If you're interested, the fact that the Sun-Earth system is rotating leads to 4 other equilibrium points other than the one mentioned above (some of which are very non-intuitive); they're called the Lagrange points. These are great places to put satellites. Things get pretty weird around some of these points; it turns out you can actually orbit them (yes, an orbit around nothing) in a quasi-stable way. Anyway, there's lots of information out there if you want to learn more.

Short answer: a balloon can't float in space (above earth's atmosphere) for the same reason a ship can't float above water.

"In space" is a relative term. A spacecraft could orbit at the same height as the balloon by travelling fast enough. The only problem is, there's still some thin air there, which makes it impractical. Balloons work by a completely different method: floating in the air.

What makes these high-altitude balloons work is they displace a certain volume and weight of air with the same volume but a lesser weight of helium at the same pressure. The lift equals the difference between those two weights.

As they go up, the air gets thinner so it takes up more volume, and so does the helium. That's why the balloon expands, but the lift is the same, because the gas in the balloon still weighs the same amount less than the air it is displacing.

If you get really really high, that weight of air takes up a huge volume, but as long as the balloon can expand to enclose the volume, the lift stays the same.

The problem is, at some level, they just can't make a balloon that can expand any more, so it pops. 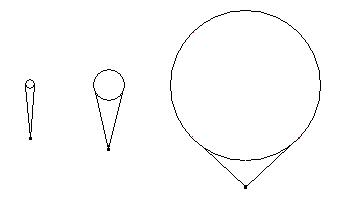 A balloon floats because its contents are less dense than air. Remember space is almost a vacuum. Also, the speed is relative to the Earth's surface and is a function of altitude.

I don't understand your last question as its poorly worded. Please try to explain yourself clearly.

You cannot be completely stationary in space, as gravity will pull you towards SOMETHING no matter where you are.

I think the previous answers misunderstood the question. It's rather obvious that a balloon cannot have buoyancy in vacuum, and therefore cannot float into vacuum at steady speed.

However, one needs to also consider the possibility that a balloon would achieve enough speed in lower atmosphere to bring it to 2nd orbital velocity. Imagine a huge light balloon that accelerates in lower atmosphere to gain more energy than Earth's gravitational potential, then shifts its shape into a thin needle-like object, punctures through the rest of the atmosphere, and escapes into the open space with enough velocity to never come back. Is it possible?

One has to clarify, of course, that some molecules (on the tail of the energy distribution) may be faster than others, but their impact would be more than tampered off by the air above the balloon.

Not the answer you're looking for? Browse other questions tagged newtonian-gravity orbital-motion free-fall or ask your own question.

2
What if Felix Baumgartner went the other way?
0
Is it possible to reach outer space with this method?
-1
If we could reach very high speeds, could we measure the velocity of the Earth this way?

40
Could someone jump from the international space station and live?
0
Surviving Free Fall with the Help of Mr. Bernoulli
4
Gravity on the International Space Station - General Relativity perspective
2
Is escape velocity the same for all objects?
1
What is the highest possible space dive free fall?
7
Questions on the movie Gravity (2013)
1
Gravitational/centrifugal effects felt in a space elevator
2
Delta-V of Earth to Moon mission using Moon orbit
0
Neutral buoyancy and free fall