Ask Question
Asked 1 year, 1 month ago
Active 1 year, 1 month ago
Viewed 80 times
0
$\begingroup$
This question already has answers here:
Kinetic energy of an object rotating about an axis not through the center of mass (2 answers)
Closed last year.

Given the situation shown in the figure below. A thin disk with mass m and radius r is rigidly connected to one end of a massless rod with length l at its centre, with the other end of the rod connected to a fixed point O and able to pivot freely around the fixed point, without friction. The disk is lifted to a certain $\theta_0$, and then released from rest.

$\vec v$ is the linear velocity vector of the centre of mass,

$I_O$ is the moment of inertia around the axis of rotation,

All that seems to make sense when the disk is rotating around its centre, and translating at the same time. However, I'm having a hard time deciding whether or not this system would be describing "linear motion" with a linear velocity, when the centre of mass is at its lowest point. By the parallel axis theorem, we can say that for this disk, $I_O=I_C+m\:d^2=\frac{1}{2}m\:r^2+m\:d^2$, where d is the perpendicular distance between the axis of rotation through the centre of mass parallel to the axis of rotation, and the actual axis of rotation through O.

Thus, from what I understand, the disk is just rotating around an axis through O, but ... wouldn't that mean this is pure rotation, without translation? This seems counter-intuitive to me, but at the same time, if this isn't pure rotation, then I would say it is pure translation, as if the centre of mass were moving along a circular and frictionless rail. Both interpretations give different results, which cannot be correct. For all I know, the disk's kinetic energy could be a combination of both!

As a follow-up: say the disk were able to spin freely around its centre as well, and it were given a certain angular velocity $\omega_0$ before being released. How would the rotational kinetic energy differ, in that case? Both the disk's rotation and revolution would have to be taken into account, but here also, it doesn't seem obvious how exactly. 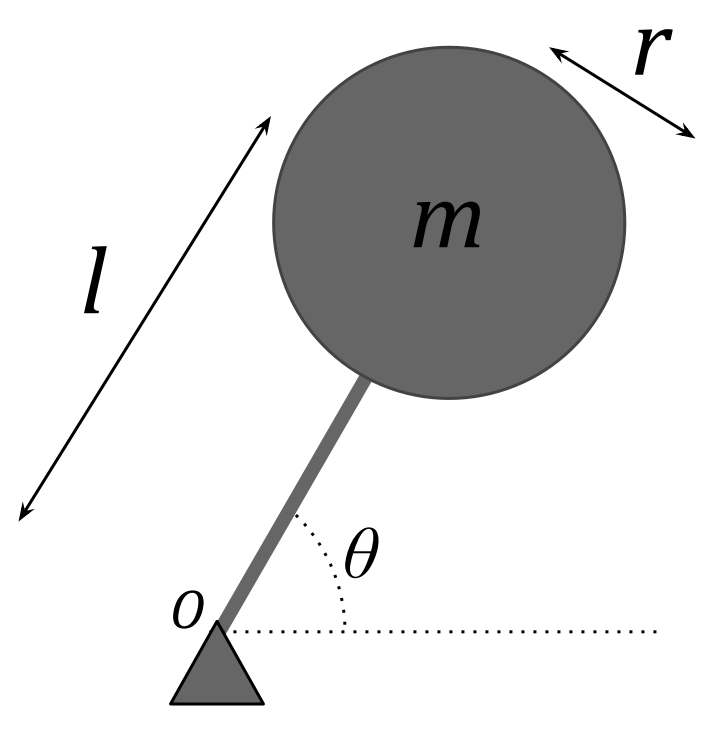 You can view it both ways. You can consider it a pure rotation and use the moment of inertia that you calculated, or you can consider it an instant traslation of the CM plus a rotation around the CM. You need to add the rotation aroung the CM because in your set up the disk is rotating around the CM: imagine that the disk is a clock with the numbers painted on it. As the system rotates the numbers will change in position relative to a vertical line (say the 12 is at the top then it is on the side). You should not include a rotation around the CM if the 12 were always pointing up.

Not the answer you're looking for? Browse other questions tagged newtonian-mechanics energy rotational-dynamics rotational-kinematics or ask your own question.