Derivation of friction in interleaved phonebooks

Trying to understand the simple model in https://arxiv.org/abs/1508.03290, describing the friction between the pages of two interleaved phonebooks. Specifically I don't see how to get Eq. 1.

Here's the geometry (from Fig 1 of the paper): 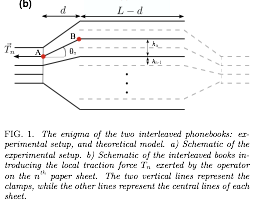 The sheets are labeled by $n$, starting with $n=1$ at the center of the phonebook. The thickness of each sheet is $\epsilon$. As $n$ increases the sheets are bent at larger and larger angles $\theta$: $$\tan \theta_n = n \epsilon / d \equiv H_n.$$

I'm looking at sheet $n$ (i.e. the one with points A and B marked). Looking at point B there is a force $T_n$ to the left (the applied traction force). There is an opposing frictional force between the sheet and the dashed one below it. This is caused by the normal force acting at point B (i.e. $T_n \tan \theta_n$). I feel like there should also be another frictional force to the right caused by the dashed sheet above, acting on the far right at the free end of sheet $n$.

I think the magnitude of the two frictional forces is the same: $\mu T_n \tan \theta$.

What is the proper way to think about this?

0
Friction acting on mass on string
5
Looking for an intuitive understanding of normal force
10
Pulling apart two interleaved phone books
3
Rolling a ball into a cone; what should the forces overall be?
0
Confused about direction of friction
0
Static friction free body diagram on a flat plane