Can light radiation pressure change its own path

Well i have seen that light creates radiation pressure Can two light waves coming from two different direction change each others path?

The scattering of light by light is a very tiny quantum effect that was first observed in 2016 with high-energy photons at the Large Hadron Collider.

Most of the time, photons do not interact with each other. When they occasionally do, they do not do so directly but instead indirectly through virtual electrons and positrons, or, even more rarely, through other charged particle-antiparticle pairs. 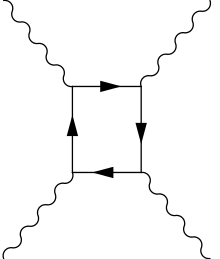 The cross section for this scattering process, in the zero-total-momentum frame, averaged over the polarization of the photons, can be calculated and is

where $\alpha$ is the fine-structure constant, $\omega$ is the angular frequency of each of the two photons in the zero-total-momentum frame, and $m$ is the mass of the electron. This formula applies when $\omega$ is small compared to $m$ and is in natural units where $\hbar=c=1$.

For example, the cross section for green light with frequency 600 THz is $1.7\times10^{-67}\;\text{m}^2$. In other words, green photons behave as if they have a "radius" of about $2\times10^{-19}$ fermi. By contrast, the radius of a proton is about 0.9 fermi, so this shows how fantastically small the cross section is and how unlikely visible photons are to scatter off of each other. The effect is only observable with very high-energy photons.

Light waves in a linear medium such as the vacuum do not interact with each other at all, so the answer is "no".

No, photons create pressure when they interact with electrons in matter. Photon waves travel right through each other, similar to water waves, they do superimpose but only temporarily and then continue on their way.

TLDR: no, photons do not normally react with each other.

All of the answers above are technically correct (the best kind of correct), but I'm not sure they really explain what's going on if I'm reading your post correctly. I'll try using a toy model to illustrate some of the main features.

Particles with electrical charge, like the electron, produce a "sea" of "virtual photon"s around them. We'll skip the details of this for now, they're ultimately not important to this discussion. What is important is this: for every virtual photon, there is, over time, the exact opposite photon. So for instance, if the electron "releases" a photon going left with energy 1, it will also release one going right with energy 1. When you sum up all of this, you get zero. That makes sense, otherwise the electron would evaporate.

Now another important point is that the spectrum of these virtual photons is very specific - there is a relationship between their energy and the time before they are zeroed out again. So high-energy photons exist, but only for short times, and vice versa. When you add in this wrinkle you get something very interesting; the energy density of the overall "sea" (or "cloud", what have you) drops off almost exactly like the classical electric field.

Now the caveat to that statement is outlined by G. Smith above - at very very high energies other things start to occur that mean that two photons may indeed recoil from each other, but I don't think that's what you're asking about.

Not the answer you're looking for? Browse other questions tagged visible-light electromagnetic-radiation photons interactions radiation-pressure or ask your own question.

4
Can two photons annihilate?
1
Does a photon require an EM field to exist?

2
Determining path of light through a nanolens
0
How will the Starshot swarm accelerate perfectly?
0
Comprehensive Nature of Light: Transverse vs Longitudinal Waves and Ray Optics
2
Can radiation pressure do work, if so does the magnetic field participate?
2
Can GWs move objects (excerpt pressure on matter) like EM waves?