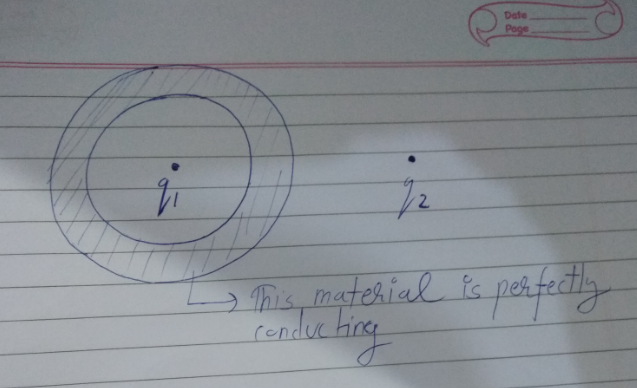 As shown in the figure, I have a hollow shell which contains a charge at its centre and another charge is placed outside the shell (some distance apart).

I know that the situation this figure depicts is NOT in electrostatic equilibrium as, of course the field inside the conducting material is not zero, the charges will flow in such a way that the resulting field due to induced charges will exactly CANCEL out the field due to other charges.

What is don't understand is that inside the sphere (the region which is not filled with conducting material) there will be no contribution of the field due to the charge placed outside the shell (I was told this by my instructor) so the force on charge placed at centre is zero.

I can't deduce a reason for this fact. I want to understand why this happens. Any help will be appreciated.

You are familiar with the electric potential of a field? Then here is how it goes:

This type of a set up is called a Faraday's Cage and this phenomenon is called electrostatic shielding.

This is also the reason why you should stay inside a car if the weather is stormy and lightning is present in the sky.

Why do they do it?

Because charges inside a conductor are free to move and moving in this way will reduce the total energy of the system.

How is energy reduced?

I can't give you an exact math expression for showing this but can give you an intuitive idea.

You must know that for finding the energy of a system, we sum up the energies between all possible pairs. Here 3 pairs are present

If the charge did not distribute, you will be adding the sum of energies of all these pairs.

However if the charge distributes in this way then the 3rd pair will cancel out(because if there is no field then there is no energy).

I can't deduce a reason for this fact. I want to understand why this happens. Any help will be appreciated.

It sounds like your problem is not with the math which describes what happens, but with your intuitive picture of what's going on.

I will try to provide a mental image of it, and doing that might help clarify my own image.

Start with a positive charge inside a negatively-charged conducting sphere. The charge on the sphere puts no force on the inside charge.

Imagine that each charge on the sphere has a rope tied to the inside charge, and they each pull. It's like a giant game of tug-of-war, and the sum of all those pulls is that nothing happens, the charge is not moved.

Well, but if that image really fits, the charge inside would have a hard time moving at all. It would be tied tight, held in place. Is there any effect like that? I don't know, that question is beyond my paygrade. I have heard there are subtle ways to detect a large electric potential that has zero force, but I don't know much about it.

Next, move a large positive charge close to the sphere, on the outside. The negative charges on the sphere do not cancel out with that one, they're all on one side of the outside charge. They rush toward the charge, along the conducting surface. When they move, they change their electric field because of their velocity, and they radiate because of their acceleration.

Soon they reach equilibrium. I'll talk about what happens at equilibrium. If the outside charge moves fast enough that they can't settle down, then the equilibrium talk does not apply.

The surface charges move toward the outside positive charge, until they repel each other just enough that they can't move further. At equilibrium, they have moved precisely the right amount that the outside charge creates no force inside the sphere.

And now the charges on the surface can be divided into two parts. There are the charges that balance each other to create zero force inside. And there are the charges that balance the outside positive charge. Really it isn't split up like that, but in our minds we can think of it that way, and put them into two groups. The charges on the far side of the sphere, away from the outside positive charge, will be fewer. Fewer ropes pulling in that direction.

So the result is that the potential is smaller. Some of the charges on the sphere are cancelling outside forces instead of each other. If your inside charge has any way to detect potential fields, instead of just force fields, it can tell the difference. But still the force on the inside charge is zero.

Not the answer you're looking for? Browse other questions tagged electrostatics charge gauss-law conductors or ask your own question.