Why doesn’t current decrease when it passes through a resistor?

As far as I know current is the amount of charge passing per unit time.

When current passes through a resistor, the resistor resists the flow of current so the amount of charge going to the resistor and leaving the resistor is the same (no charge accumulation)

but the time component increases, i.e. it takes more time for the charge to travel through the resistor.

My question is related to If the current is increased, is there more charge flowing or is it moving quicker?

If the current is larger more charge flows through the resistor per second.

This is what you are missing here:

Let's model your system as a water hose where a small length of it is constricted in diameter. We'll consider that constricted length to be our resistor.

This is the reason that a resistor does not make the current flowing through it disappear.

Imagine water draining a tank though a hose.

The amount of water in the hose is constant, so what goes in comes out.

That’s true whether the hose is large and free flowing with a lot of water moving, or small and constructed with only a little flowing.

The flow of water (analog to the current)does not decrease from the input to the output of the hose.

The image below, courtesy of Professor Richard Fitzpatrick, from the University of Texas at Austin, shows a resistor R connected in a simple circuit to a battery, which has internal resistance r. 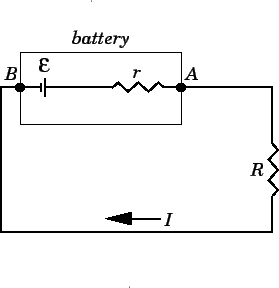 The battery supplies an (almost) constant voltage E, and by Ohms's law, the current I in the circuit is given by $$\mathrm{I=\frac E {R+r}}$$

Maybe this could help. As a first approximation consider the Drude/free electron model

$n$ is electron density. That changes from material to material. $e$ and $m$ are electron charge and mass which are universal constants $\tau$ is the mean time between collisions. This could change with temperature, addition of impurities etc.

When you have a higher resistance you have lower current . It could be because it has a lower $n$ or smaller time between collisions.

When you say less charge or more time you have to look at exactly the situation. Compared to what? If you are replacing a carbon resistor with another of higher value, actually neither $\tau$ nor $n$ change. Only dimensions. If you are changing the temperature, ( to a first approximation) $n$ does not change. If you replace carbon with copper both change.

This is in addition to farcher's answer.

An analogy for The current in the circuit

A person is standing , and there is a very long multiple line of restless kids along with their parents, kids are moving around (due to hot weather) in front of a the person , and there is a Small stretch of Barricades in between the kids s somewhere in the the line. Something like this

(I forgot to draw the parents, assume they are there.)

Now the person(battery) shouts "snake" (creates electric field in the wire), the kids in front of him immediately hear it and starts running away from him ( effect of electric field on charges),

[but kids at the other end haven't stated to move as sound didn't reach them yet (speed of light is capped and not infinite, so is electric field)],

now moving kids stumble with other's parents and fall down , but get up and start running again this keeps repeating, (parents are smart won't run ; ) )

and region where the barricades(resistor)¹ are present , the kids stumble with barricades a lot more (high Collison frequency, and decrease in time between collisions), beacause of this the kids before the barricades experience traffic snake effect, aka traffic wave . [Video on it] (https://m.youtube.com/watch?v=Q78Kb4uLAdA)

So the all kids before the Barricades move slower than their max capability ( if barricades wasn't there at all). Till now we just saw what happens upto charge flow to a certain point in the circuit

Now comming back to real world

It's a fact that charge leaving battery is equal to charge entering the battery,

So statement in my question is disproved. Also this an original analogy that I came up with, although not perfect , but it makes people visualise lots of things.

I got your problem. Look the charges entering the resistor feel more forces when they enter the resistor and thus slow down but the moment they leave the resistor there is no restricting force at all on them and it is similar to the conditions which was earlier (before the entry) I.e the only force is due to electric field . So the charges regain their previous speed and thus current doesn't drop after passing through the resistor.

Not the answer you're looking for? Browse other questions tagged electric-circuits electric-current charge electrical-resistance or ask your own question.

7
If the current is increased, is there more charge flowing or is it moving quicker?

7
If the current is increased, is there more charge flowing or is it moving quicker?
2
Why, microscopically, is the voltage drop across a resistor affected by the current through it?
3
If current is same, is it correct to say that the speed of charge passing through a resistor is more than that of a normal wire?
1
Why does a resistor decrease the current flowing in a circuit if this is what current is?
2
Why does more voltage mean more current?
0
Why is potential difference related to current i.e. flow of charge rather than a single charge in OHM's LAW?
0
Is the current obtained using Ohm's law that which passes through the resistor or that which passes through the circuit?