What determines the direction of an object that has undergone the effect of a gravitational slingshot? 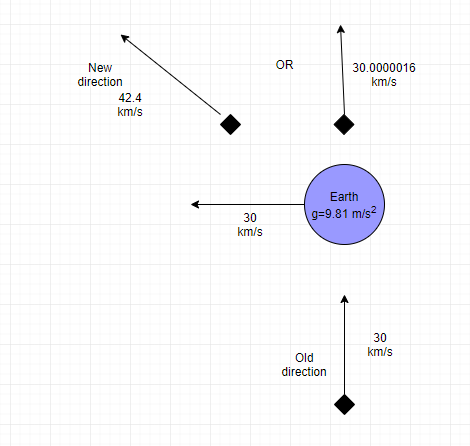 Under some mild assumptions this is a simple calculation. Consider a system of the Sun, a satellite and Jupiter. In a coordinate system where the Sun is stationary Jupiter and the satellite have velocities $\vec{v}_J$, $\vec{v}_s$ respectively. We will have to make the assumption that we don't care about the Sun's influence on the Satellite during the slingshot maneuver itself - that way we are left with a series of 2-body problems to solve: Jupiter orbits the Sun, the Satellite initially is in a solar orbit, at some point we turn off the Sun and turn on Jupiter and consider the satellite in a hyperbolic orbit around Jupiter, and when the satellite is far away again we return to considering it to be in the Sun's gravitational field only.

For this question we really only need to know two things: the velocity $\vec{v}_J$ of Jupiter with respect to the Sun during the flyby, and the change in the satellite's velocity $\Delta\vec{v}_s$ as a result of the flyby. We'll take the former as a given and worry only about the latter. It's easiest to move to the instantaneous rest frame of Jupiter, and we'll hope that the interaction happens fast enough that Jupiter doesn't move too much. With those assumptions the satellite is going to move on a hyperbola around the fixed mass of Jupiter. The deflection will change the direction but not the magnitude of the satellites velocity. Let's denote this change by the rotation matrix $\hat{R}$. Since in Jupiter's rest frame $\vec{v}_s^{IRF}=\vec{v}_s-\vec{v}_J$ we have:

Which gives a final velocity in the Sun's frame as:

So the steps to finding the final velocity are:

1) Find the deflection angle $D$ of the satellite around a stationary point mass. This is a well known problem (it's equivalent to Rutherford scattering for one thing).

Remark: the approximations made here amount to using a patched conic approximation that at every point we consider only the two most relevant bodies and solve the 2-body problem. I think this is probably accurate for this case for the above reasons.

8
Hohmann transfer orbit questions
6
What is the precise definition of Gravitational Sphere of Influence (SOI)?
2
How to find a hyperbolic escape orbit with a starting point and a desired velocity after sphere exit
4
Kepler's second law implies angular momentum is constant?
0
Orbit of detached mass
0
Why wouldn't the weight of an object affect the magnitude of the drag force on that object?
1
Regarding the objects in free fall in the ISS