Critical point of a pure substance

What I've understood is no matter how much pressure we apply to a gas present at its critical temperature, it will never liquefy, and that there will be no 'distinction' between the 2 phases, liquid & gas. What I don't understand is, what does it mean that there's no distinction between the two?

What I've also read about is that the heat required to evaporate that liquid at the critical temperature or above is zero. Does that mean that the specific enthalpy gap between the liquid and gaseous states is also zero? If that's true, then isn't that 'liquid' phase already turned into gas? Or is it still in a liquefied state with identical properties to that of the gaseous? Thanks

To illustrate what is happening near the critical point for a fluid, I will look at carbon dioxide, a fairly well known system showing a critical point. It is of some use technologically, particularly in MEMS (microelectromechanical systems) technology for critical-point drying.

Lets model CO2 as a van der Waals fluid, with

The $a$ and $b$ coefficients can be found on Wikipedia.

One rewrites the van der Waals equation to get $p$ as a function of $v$ at constant temperature $T$. For a series of temperatures up to and just past the critical point temperatures one obtains a plot like: 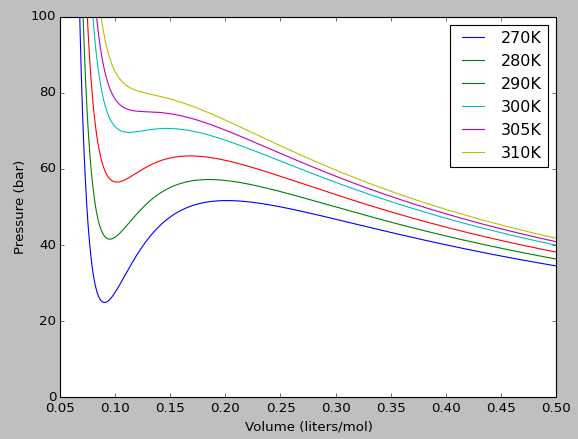 Take the lower line (270K). If you are holding the system at 270K and 40bar, there are two distinct volumes that are stable solutions to the van der Waals equation. These represent, respectively, what we would call the liquid (lower volume ~0.07L) and gas (higher volume, ~0.4L) phases. The two phases have distinct properties (the volume occupied at a given pressure and temperature). They will be in equilibrium with each other, and the balance of phases will be dictated by other considerations (adding/subtracting enthalpy to convert one phase to the other).

As the temperature increases, one continues to see that there are multiple volumes at a given pressure until near 305K. There it looks like the local minima is going away, and indeed at 310K it is clear that the pressure is now a single-valued function of volume. (The critical point of CO2 is officially 304.25K at 73.9 bar.)

Now, can you go from the lower volume (liquid) phase at 270K to the larger volume (gas) phase at 270K without going through a first order phase transition? Sure thing, through suitable variations of pressure and temperature. Increase the pressure to, say, 100bar at 270K. Now increase the temperature to 310K, holding at 100bar. You are now on the top yellow curve. Decrease the applied pressure to about 40bar, giving a volume way over on the right hand side of the plot. Now drop the temperature to 270K. Congratulations, you are now over on the low volume (~0.4 L/mol at 270K) side of the plot having never gone through a first order phase transition.

what does it mean that there's no distinction between the two?

Does that mean that the specific enthalpy gap between the liquid and gaseous states is also zero?

Since there is only one phase above the critical temperature, there is no "enthalpy gap" because there is no liquid to vaporize.

1
Boundary between supercritical fluid and gaseous phase
1
Good layman definition of the critical point(phases) and supercriticality
8
Why does Triple point exist?
0
How accurate is the following description (quoted) of what happens when a liquid is heated in a closed vessel?
2
Substance below Critical Temperature but above Critial Pressure
1
What is critical temperature exactly?
1
Is there a phase coexistence line below the critical temperature $T_c$ in normal to superfluid transition?
2
Calculate the enthalpy of a pure compound with a cubic equation of state
3
Some Questions about the Critical Point