Diffusion 2D on a surface : diffusion coefficient and surface friction

Is there a way to formalize that with a relation $D(D(r_0),\mu_s,r,\rho)$ with $D(r_0)$ the diffusion coefficient for a particle of size $r_0$, $\mu_s$ the coefficient connecting gravity and $\rho$ the density of the object. 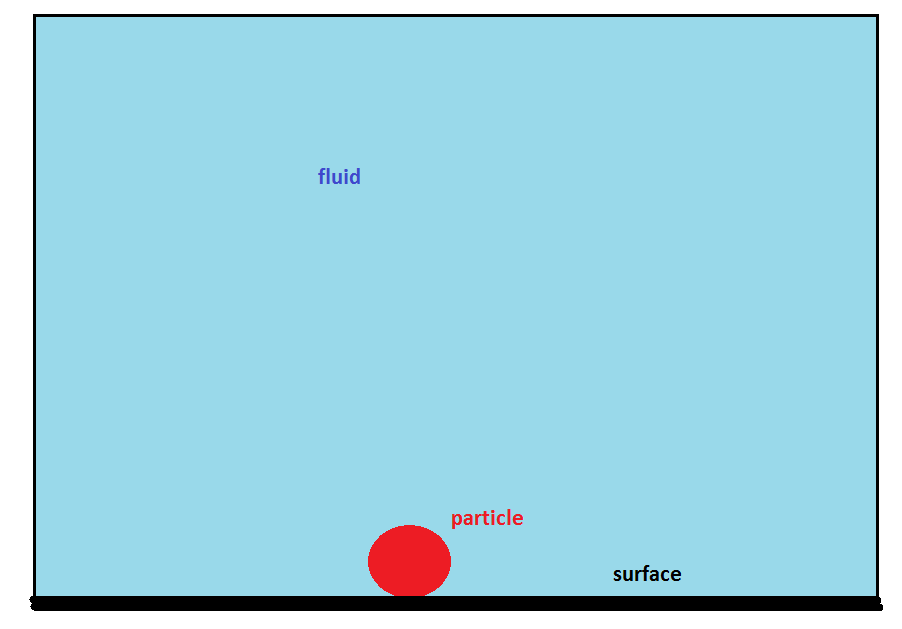 One must have some reservations about the assumptions made in setting up a model like this. For example, at the microscale or mesoscale, is this mechanical formula for sliding friction likely to be valid? Very close to the surface, is the drag due to the fluid likely to obey the same law (proportional to velocity), with the same coefficient (friction or drag) as in the bulk? Under these conditions, will the particle be simply translating, or will it rotate as well?

I'm going to leave all of these reservations aside (as well as the fact that these are active particles) and restate the problem in its most elementary form. Diffusive behaviour comes from solving the Langevin equation, which includes a drag force (proportional to velocity, $-\zeta v$, with a friction coefficient $\zeta$), and a random force or white noise $R(t)$ (whose statistical properties are related to $\zeta$). From this, one can deduce that the mean-squared displacement is proportional to time $t$, hence defining a diffusion coefficient $D=k_BT/\zeta$. One can also derive an equivalent Fokker-Planck equation. Optionally a systematic external force $F_{\text{ext}}$ can be added.

You want to add to this a "dry friction" force (sometimes called Coulomb friction), so the full Langevin equation will become (in one dimension for simplicity) $$ m\frac{dv}{dt} = -\zeta v - F_{\text{friction}} \sigma(v) +F_{\text{ext}} +R(t) . $$ In the extra term, $\sigma(v)$ is the sign of the velocity, and $F_{\text{friction}}$ represents the magnitude which, in your case, would be given by the formula involving $\mu_s$ and a buoyancy-corrected particle weight. You can set $F_{\text{ext}}=0$, but it is sometimes helpful to discuss the mobility of the particle by allowing it to take a constant non-zero value.

The solution to this problem does not necessarily reduce to simple diffusive behaviour with a modified diffusion coefficient, as you hoped. However it has been tackled in the literature. In one of his last papers, de Gennes J Stat Phys, 119, 953 (2005) analyzed a problem of this kind, and it was also treated by Hayakawa Physica D, 205, 48 (2005) which you can find generally accessible as a preprint. More recently a very detailed analysis by Touchette et al J Phys A, 43, 445002 (2010) also available as a preprint has appeared.

I don't feel expert enough to comment on these solutions, which are fairly complicated, although de Gennes does identify some scaling regimes in which a simplified description seems possible. Hopefully, though, you will find these pointers to the literature helpful in tackling your problem.

Not the answer you're looking for? Browse other questions tagged friction diffusion brownian-motion stochastic-processes surface-diffusion or ask your own question.

3
Behaviour of individual terms in Einstein-Smoluchowski fluctuation-dissipation relation
3
Can you equate the diffusivity constant in random walks with the one in Brownian motion (Einstein relation)?
1
Force causing diffusion
9
Diffusion coefficient for asymmetric (biased) random walk
3
What is limit on the size for a particle in a fluid medium to experience Brownian motion?
9
Renormalization and Brownian Motion
0
Question about the autocorrelation function of the fluctuating force in the Langevin model for Brownian motion
3
Diffusion of Ink in Water