Originally asked in ElectricalEngineering.SE, but I was told Physics.SE might be a better place to ask.

Over the years, I've come across websites and people with different opinions on the "correct" way to charge rechargeable batteries (I'm more concerned with laptop, tablet and phone batteries than with rechargeable AA or AAA batteries, if that makes a difference).

None of those websites or people have ever explained why what they say is true is, in fact, true, so I thought I'd ask here.

I'm also aware that battery life/health decreases over time and it's just a process that can't be helped because entropy.

My own experience with battery charging and health is varied (and I haven't performed nearly enough experiments to come up with a reasonable conclusion because I only have so much money to spend on electronics and so much time to spend draining and recharging batteries):

I'd like to settle this once and for all, please, preferably with an answer that includes physics. Why is the best way way to charge a battery the best way?

What is the memory effect

Typically "memory effect" refers to the phenomenon that a battery that is not fully discharged for multiple charge cycles will "remember" ("become lazy"), and will not be able to deliver its full capacity. This phenomenon is closely related to the structure and chemistry of the battery - older NiCd and NiMH batteries were susceptible to this. If you have a smart load distribution and charging system you may be able to avoid this problem by making sure individual cells don't always get discharged to the same amount.

A form of "memory effect" (not the original meaning) is "voltage depression". When a cell is OVERcharged, you can create certain contamination on the surface of the electrodes - for example crystals of electrolyte. This acts as an impediment to electron flow, and the battery will drop its voltage faster when you draw a lot of current (because of higher internal impedance). This is something that can be fixed by taking individual cells through a full charge/discharge cycle: but when multiple cells are in series, it can be hard to achieve this as different cells will have different capacity. If you have a way to control the charge of individual cells, you can overcome this. You need a smart battery.

What is a smart battery

A smart battery is a battery with a built-in BMS - battery management system. This means that regardless of what power you supply to it for recharging, it will try to direct that charge in an optimal way to (or away from) the cells that need it, with the right amount of current and voltage to best charge the battery without damaging it. It can also control the way individual cells are used to deliver power: when you don't need a lot of power you can "really drain" one of the cells that is already nearly exhausted; when you need to draw more power you can include some of the "healthier" cells to deliver enough power. These BMS systems often contain DC-DC converters as well so you can get more voltage from a particular cell - again ensuring you can get full discharge.

How do batteries get damaged

When you don't have a BMS, the easiest way to damage your batteries is to run to full discharge. Since different cells do not have exactly the same capacity, as you get to zero capacity on some cells, you may still have capacity on others. The "live" cells will continue to push current through the "dead" ones. The dead ones are now getting "charged in reverse" which will damage the electrodes irreversibly.

All batteries will slowly get damaged in normal use: during charging, you build up a layer of material on the electrodes that will react with the electrolyte to generate power during discharge. The structure of this build-up will change over time, depending on the geometry of the battery. Once the spacing between electrodes becomes non-uniform, the field strength will change as a function of position and this affects the rate of chemical reactions. This can further increase the non-uniformity, in extreme cases even causing a short circuit. Temperature plays a big role in this: at higher temperatures batteries have a significantly shorter life. Since charging can raise the temperature, one thing you can do to improve battery life is make sure that your device has sufficient cooling while being charged. I have read that some of the Qi charging devices make the problem worse by adding more heat during charging.

With all these things in mind, the following guidelines are helpful:

I have included a figure for the Cycle number as a function of Depth of discharge. 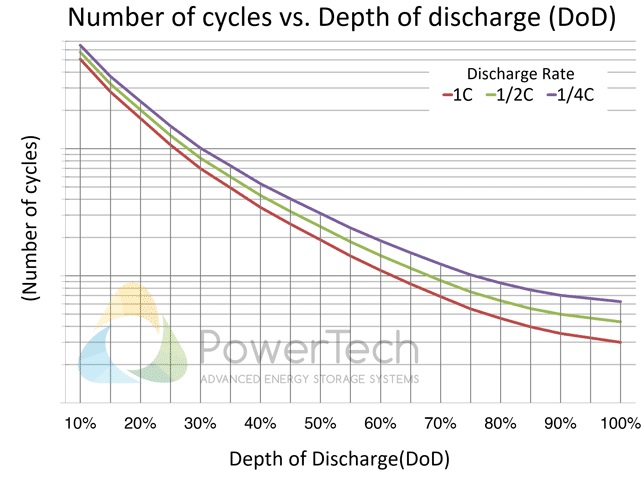 Not the answer you're looking for? Browse other questions tagged electric-circuits charge physical-chemistry batteries electrochemistry or ask your own question.

1
Do Alkaline batteries, $\mathrm{NiMH}$, rechargeable alkaline, Lithium $\mathrm{AA}$, all have similar MAX POWER?
3
Is it possible that a battery goes flat faster in a cold environment?
6
Why batteries in serial don't discharge each other?
4
Why are charging times so long for Lithium-ion batteries?
2
A reliable aluminium battery that charges in a minute. What's the catch?
21
How can a battery charge up another battery to a higher percentage?
1
Battery operation, charge and discharge processes misconceptions
0
Why do batteries need a loop to discharge?