How does a guitar work?

1 does not make sense to me but for all I know it could be true. If it's true, a string under tension which has no connection to a soundbox would make a soundbox make loud noise if the vibrating string was close to the soundbox.

2 would help explain why guitar makers often use an expensive wood for the front and cheap woods for sides and back, because the front is particularly important for vibrating just right.

Both #1 and #2 have the disadvantage that the string isn't very good at vibrating the air which is why you want a sounding board, and yet we depend on the air vibration of the string to make the sounding board move.

3 and 4 would also explain the expensive wood on front. Ovation brand guitars use a tough plastic for the sides and back, with very little difference in tone.

The Godin acoustocaster apparently can function as an acoustic guitar with no soundhole at all. If so, I doubt that the air vibrating inside the body of the guitar is critical.

I stuffed a sweater inside my guitar and I couldn't tell any difference in the sound except when it actually touched a string.

I tried sliding a piece of stiff thin cardboard over the soundhole while playing a note, and I couldn't tell any difference in the sound.

I started out thinking there was a difference between an effect caused by a transverse motion of the string, versus the effect caused by a tensional longitudinal difference at the bridge. But now I'm not sure I understand the difference in a guitar. I can say that it sounded about the same when I plucked it up versus sideways, but I couldn't do that very loud without buzzing against the frets.

I really tend to think the effect on the sound box is longitudinal on an irish harp. But I could be wrong. I don't see how to test it. 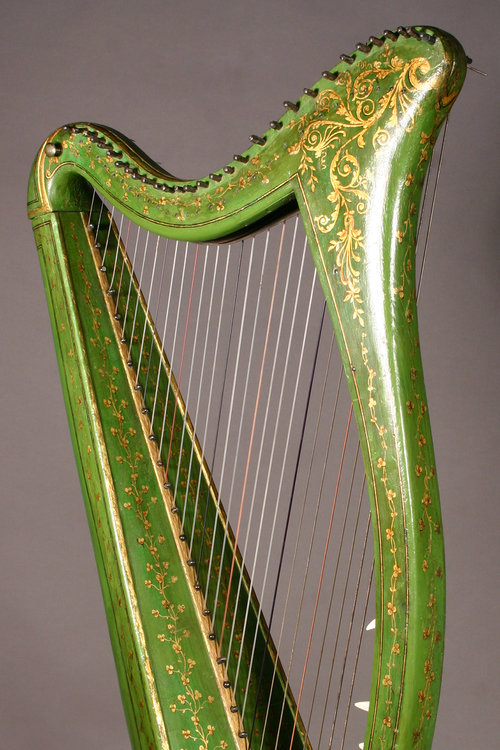 Safesphere's answer is excellent, and explains many things I wanted to know.

My remaining question is kind of academic and maybe not worth answering, but I'm still curious. I'll approach it as a thought experiment.

Imagine you have a guitar wire with the ends embedded in two concrete walls, stretched. No give in those walls at all. You clamp a small fishing weight onto the wire at the midpoint. If you pluck the wire, you are clearly causing lateral motion. The string will vibrate laterally because of the mass of the fishing weight versus the stretch of the wire. The string is a spring, and its vibration depends on mass versus stretch.

Now imagine you take that same guitar wire and instead connect one end to a dynamometer. If the vibration is slow enough, I expect you will see the load changing in a sine wave when you pluck the string. And I expect it will be mostly because of the change in the longitudinal force from the stretched string, and not because of the angular change from the string's transverse vibration.

But this is a picky point, probably not worth a lot of argument.

The string oscillations are mainly transverse (a standing wave). The string motion causes the tension to oscillate thus applying a varying force on the guitar top through the bridge and saddle. The string engage the air very little (as is evident on an electric guitar without amplification). This is because the acoustic wave impedance of the air does not match that of the string, so the energy transfer is not efficient. The guitar top acts as a transformer matching the impedances. The string tension moves the top and the top moves the air.

However, the top is a dipole, meaning that it moves the air above and below itself out of phase. The wave generated below the top must have its phase and direction reversed to add to the wave generated above. The guitar body acts as a phase inverter with a sound hole acting much like a port on a ported speaker. The main function of the guitar back and sides is not to vibrate, but to simply reflect the sound. For this reason hard wood species like rosewood work best, but also laminated wood or plastic also works. This is in contrast to the guitar top whose function is to vibrate, so the quality of wood is critical there (typically, but not exclusively, spruce or cedar).

The back wave inverted inside the guitar body and coming out of the sound hole is not 100% of course due to various losses. Even if it were the same amplitude as the front wave, it would increase the volume only by 6dB. In reality it is less and thus is not critically audible. This is why you don't hear much of a volume change when you cover the sound hole or put a sweater inside a guitar. Note that speakers also exist without a port and most speakers have fiberglass inside much like a sweater in the guitar.

So out of your options, a combination of 4 and consequently 3 is correct, except the air is moved mostly by the top, but not directly by the strings.

Not the answer you're looking for? Browse other questions tagged acoustics resonance vibrations or ask your own question.

6
Vibration in a guitar when playing two strings
0
Why will a guitar string "ring" when I resonate my vocal chords at the same pitch as the string?

11
Will a violin string keep vibrating for a longer time in vacuum than in air?
5
To what degree does guitar construction affects the vibration of the strings?
1
What's the role and the physics behind a sound box?
8
Does plucking a guitar string create a standing wave?
2
Does a vibrating string produce changes in tension in the string?
0
Why will a guitar string "ring" when I resonate my vocal chords at the same pitch as the string?
9
If all harmonics are generated by plucking, how does a guitar string produce a pure frequency sound?
6
Vibration in a guitar when playing two strings
1
Sound of string in a guitar