I want to relate these two .Please help me someone to figure it out.

The use of phasors can help in such a case?

Response to a question asked by the OP.

The standing wave can be dealt with in this way.

The $A\sin(kx - \omega t)$ variation at the same position $x$ is a little trickier to deal with in the following way. 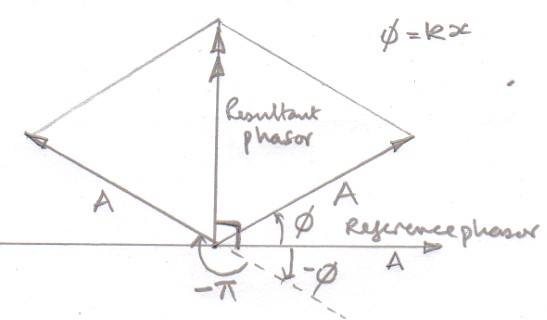 So as you move position $x$ the phase $\phi$ changes to give a different but constant amplitude for the resultant phasor.

Not the answer you're looking for? Browse other questions tagged homework-and-exercises waves interference superposition or ask your own question.

4
how to add two plane waves if they are propagating in different direction?
0
Phase difference of two reflected wave
0
How to put the minus sign of a cosine wave to the phase?
0
Can the equation of total maximum amplitude $A_n=\sqrt{A_1^2+A_2^2+2A_1A_2\cos(\Delta\phi)}$ be used though the waves are not in the same line
2
What is proof of principle of superposition of waves on a string?
0
Can two standing waves combine to form a traveling wave?