In a masses inelastic collision, K energy convert to heat but velocity remain same. we receive heat without losing velocity? how?

I have read the answer about the energy and momentum conservation question but I have a great question now! Imagine we have two masses which one of them is at rest and another move and collide to the rest one. Now we know that the momentum remain always constant even if the collision was inelastic but the kinetic energy convert to heat. So in this case the energy converted to heat and radiate to space because of the (heat radiation nature) so we will receive that energy and then as we know the momentum will conserved there and lead that the second mass start to move with the same velocity as the firs mass before collide. Imagine again there were a chain much more masses spaced with same divided far from each other. One mass will collide to the next and radiate heat and the the second mass start to move with the same speed and collide to third mass and radiate heat and then start to move toward the forth mass and .... see? we were receiving heat from naught? While the system lost no velocity amount of energy freed. This is impossible. I have test this problem by MSC ADAMS. ADAMS shows that the masses velocity remain same. So where is the sure of this heat energy?

In the image you will see that the two mass collide together inelastically fore ever because the momentum conserved the system never loss velocity, but we have receive heat from their collision 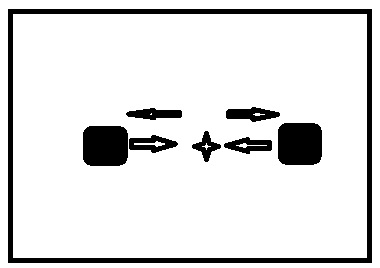 ... so we will receive that energy and then as we know the momentum will conserved there and lead that the second mass start to move with the same velocity as the firs mass before collide.

But you said that it was an inelastic collision. But if it were truly inelastic, then not all of the kinetic energy of the first ball that was rolling would have been transferred to the second one that you said was at rest. Hence, the second ball can't be rolling with the same speed.

... In the image you will see that the two mass collide together inelastically fore ever because the momentum conserved the system never loss velocity, but we have receive heat from their collision

This is a violation of the conservation of energy, that followed because of the error you made while using the momentum formulas.

TO POINT OUT (from the comments you posted): It is not true that the velocity will remain the same with each collision. Because the collisions are inelastic, some amount of kinetic energy will be lost. So, you have to change the values of velocity that you input in the momentum conservation formula with each collision (you are right in saying that momentum is conserved in inelastic collisions).

This implies that the initial kinetic energy is larger than the final, except in the case where equality holds, which is one of the particles ends up at rest.

So in the inelastic case, the first particle does not come to rest, but keeps moving somewhat. The most inelastic case has the two particles congeal together to form a single mass $2m$.

Not the answer you're looking for? Browse other questions tagged energy momentum collision or ask your own question.

48
How can momentum but not energy be conserved in an inelastic collision?