How to calculate the force of a fan?

Let's say that we want to build a helicopter, if we want it to hover in the air then the pushing force of it's fan must equal the force of gravity but in the opposite direction, so how do we calculate the pushing force of a specific fan? What information do we need to know? Like it's rotation rate and it's area.

Also, I've searched about this but I didn't find a clear equation or something, but some people were talking about some variables, like "air going through the fan" what does that mean? And also the "angle of the blades" what is it?

Finally I have another question, is it a requirement for the fan to consists of blades and not a one full circle?

"Air going through the fan" means the volume of the air that passes the blades. The force that the blades exert on the air to push the air down should be the same as the gravity on the helicopter, like you said. Roughly speaking, if the helicopter has to push X air per second down to hover, and the helicopter has N blades, then every second X/N air has to be pushed down per blade. You will need a lot more information to answer this in more detail. You can't use a full circle, because then 0 air will pass the circle.

There isn't a clear equation out there, because it doesn't exist. Fluid flow is a chaotic system and the smallest details will change the outcome. Only with some gross assumptions, you can start looking at the performance characteristics of the fan blades (impeller).

The approach typically employed here is to slice each blade into a finite number of stripes, each being a 2D wing shape, with specific lift and drag characteristics as a function of incident airspeed and angle of attack (see this presentation for more details.)

Published details of of NACA 4412 airfoil 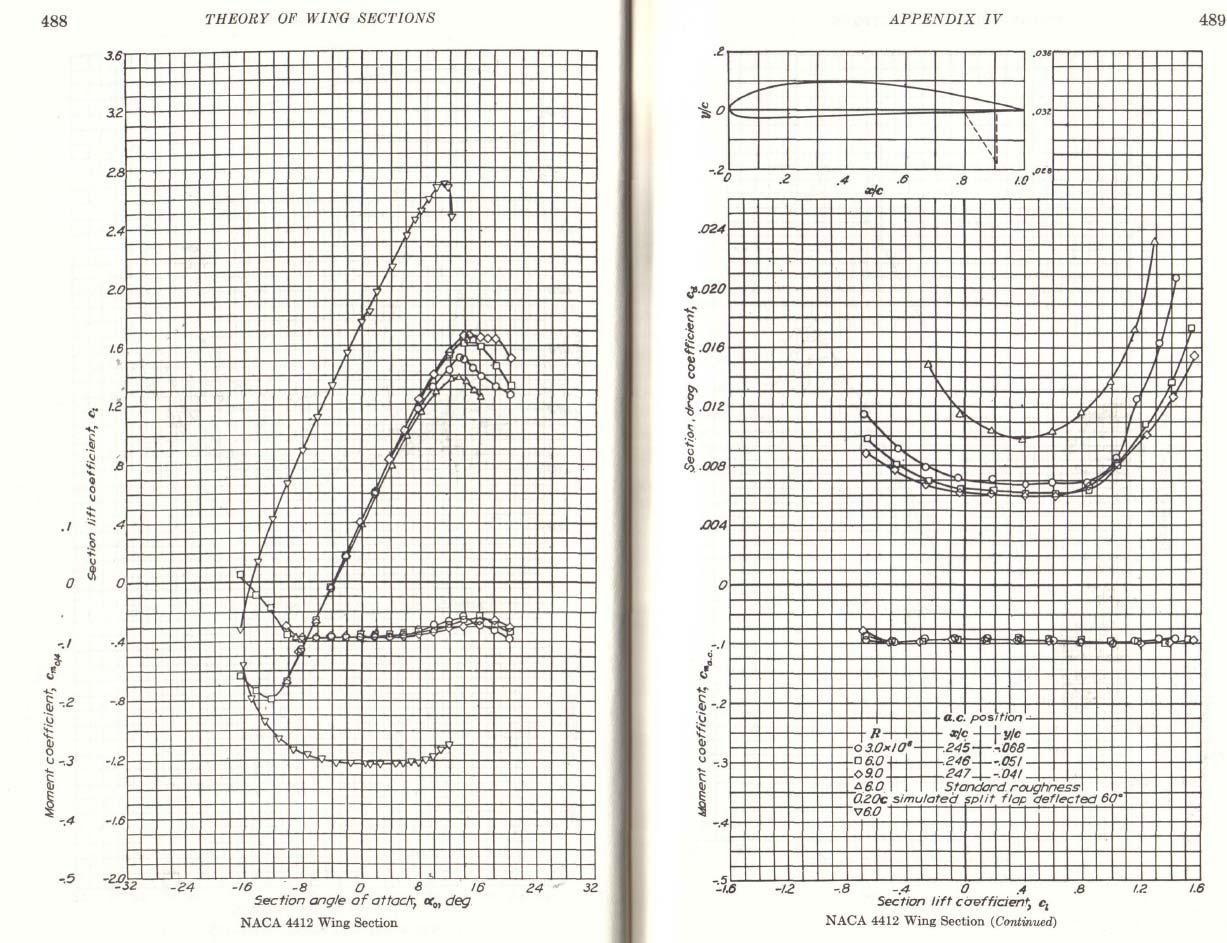 Now because of the design of the fan, the angle of attack depends on the airspeed (do a vector diagram of the velocities) and on the blade design. In the end, you will produce a single curve of axial force vs speed, as well as drag vs. speed.

Now comes the design of the motor which produces different torque at different speeds and try to match up the blade drag to the motor torque to find out how fast will the fan spin. Finally, use the speed and the curves about to get the total axial force.

An online database of airfoil characteristics.

In this way, you don't have to learn computational fluid mechanics.

Not the answer you're looking for? Browse other questions tagged forces fluid-dynamics flow fan or ask your own question.

1
A fan is connected to a pipe, what happens to the airflow after the pressure drop?
0
Does adding mass to the fan blades affect its max velocity?
0
Does a fan's orientation with respect to gravity affect its flow rate or static pressure?
3
How does a helicoper auto-rotate? The force of the air pushing on all blades would equal out. Wouldn't it?
0
Adding an additional fan to a fan powered sail according to Newton's 3rd Law?
5
Do helicopters and planes fly by different reasons?