How is distance measured to far away stars and galaxies?

What I need is an accurate description of the methods used to determine the distance to Andromeda. The Parallax method is for nearby objects as I presume. The red shift method applies, but how do you really determine a red shift? Maybe the radiation emanated from that object already has the wave lengths reach Earth? Or maybe it's travelling at a large speed from us? Or maybe its mass is greater than we think?

There doesn't seem to be a complete answer explaining redshift, I'll give it a go -

Redshift is the phenomenon where (in this context) light appears to be redder meaning it has a longer wavelength. This is related to the doppler shift but there are other ways that light can get redshifted.

This redshifting of light happens because of two reasons -

Now to answer how to determine a redshift : One is usually looking for a spectral line or a set of spectral lines to observe. Now, one can calculate and observe under controlled circumstances what the wavelengths of these spectral lines will be when they are at rest with respect to us, so we know what wavelengths to look for. 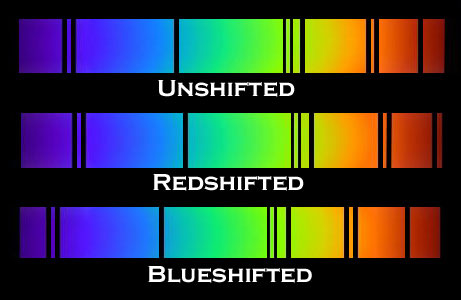 A kind of opposite of spectral lines are absorption lines (pictured). Absorption lines are what are used (to my knowledge) in astronomy. Now, one thing that you'll notice from the picture is that if one line is redshifted, then all the lines will be redshifted by the same amount. Therefore by measuring the relative spacing between the lines we can identify what species it is from our prior knowledge. And then by measuring by how much the observed spectral lines are offset from the expected values we can calculate the redshift of the object. Figuring out whether the observed redshift is due to the expansion of the universe or due to a doppler shift is a more subtle problem to tackle. But your question doesn't worry about that, so I'll leave it to curious people and Google to figure out.

The distance to Andromeda galaxy is measured by the method of standard candles: http://en.wikipedia.org/wiki/Standard_candle#Standard_candles

I think Cepheid variable starts are appropriate for Andromeda galaxy. The period of pulsing of those stars is related with it's maximal brightness, which allows to calculate the distance.

There are several methods:

For closer galaxies you can use the cepheid variables as standard candles. There's a relationship between the periodicity and absolute brightness and from that you can find the distance.

For distant galaxies use redshift - you look for a known spectroscopic emission line e.g. the neutral Hydrogen hyperfine spin-flip transition at the famous 1420MHz. Measure the difference between the expected and the measured frequencies delta f - plug that into Hubble's law and it gives you the distance.

You should start by taking a look at the (cosmic) distance ladder of standard candles: en.wikipedia.org/wiki/Cosmic_distance_ladder

Now for an answer to how do you measure the distance to galaxy's or stars go back to 1st year Astronomy. Use paralax or redshift as stated above. One not mentioned is the inverse square law which utilizes paralax.

16
How would we see a near-lightspeed object emitting light?
3
Do we actually measure distances in light years?
0
Alexandrian knowledge on distance of Sun from Earth
7
How are Raw Observations Processed to Obtain Pure CMB Data?
1
Parallax versus Redshift when measuring astronomical distances?
3
Present vs Past in Cosmological time
2
Time between Big Bang and 'now'
3
Gravitational wavelength shift of microwave background radiation
0
How do we measure the size (not mass but dimensions) of far away galaxies?