How can we determine if poles are North or South when viewing magnetic field lines formed by iron filings?

Iron filings can be used to visualize the magnetic field lines of a magnet.

For example, from Wikipedia: 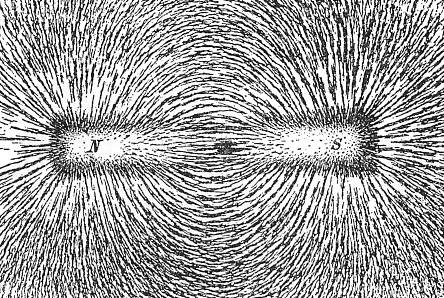 Question: When looking at magnetic field lines formed by iron filings, how can we determine which magnetic pole is North and which is South?

We can't. A magnet's North and South poles don't have any particular intrinsic property by themselves, only in how they interact with another North or South pole. If two pole attract, they are opposite, but we can't say which one is which. If two poles repel, they are either both North or both South, but again, we can't tell which it is. We need to compare to against the Earth's magnetic field as a reference. Only then can we identify a magnet's North pole, which is the one that points toward the Earth's magnetic south pole (which is, ironically, located near the Earth's geographic north pole)

Not the answer you're looking for? Browse other questions tagged homework-and-exercises electromagnetism or ask your own question.

2
Figuring out North and South Magnetic Poles for Earth
1
How do virtual photon cloud produce discrete magnetic field lines in bar magnet?
5
Why don't the iron filing all goes to the North pole?
4
How does Jupiter have two magnetic South poles and one magnetic North pole? Magnetic tripole?
3
Why does the magnetic field form a full loop going from the north pole to the south pole and then back to the north pole?