A modified version of the quantum eraser experiment, consisting of just a photon source, double slit, photon-splitter crystal and a screen, capturing one of the entangled twins. No detectors, no mirrors, nothing. The other twin is lost. Would this produce an interference pattern or not? The sources I find are not clear on this.

Here is the impliaction: If this modified experiment produces an interference pattern and the full quantum eraser experiment does not (when placed in the mode which unambiguously determines which slit the photon passed through, so the "eraser" part is missing), it means we can send information to the past. Imagine this: I send photons in a wave, split them, using the crystal and look for patterns on the screen, produced by the screen-side twin photon. The other twin I bounce between mirrors until I want to send the information to the past. Lets say the format of the information is binary - "0" encoded by NOT producing an interference pattern and "1" by producing an interference pattern. So if I want to send "0" I will add the detectors to the setup (resulting in the classic setup, with the eraser missing), and if I want to send "1" I will remove them (resulting in my modified setup).

This all hinges on the answer of the title: "Does simply putting a photon-splitting crystal after a double slit break the interference pattern?"

EDIT: As requested here is what I imagine and ask if the photons, hitting the screen (D0) will produce an interference pattern. 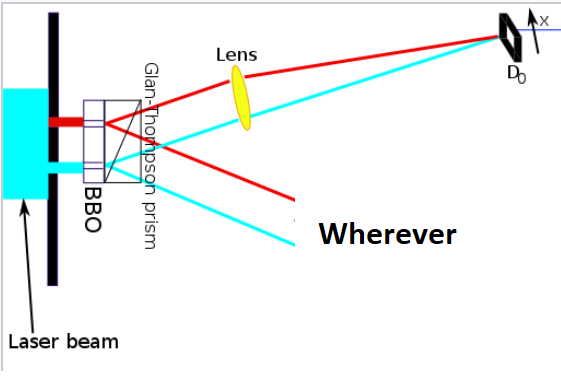 Here is a drawing of what happens before and after the crystal that can give spontaneous parametric down conversion, SPDC: 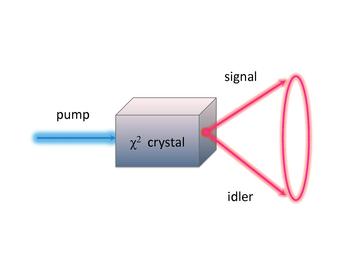 An SPDC scheme with the Type I output

The conversion efficiency of SPDC is typically very low, with the highest efficiency obtained is on the order of 4 pairs per $10^6$ incoming photons for PPLN in waveguides. However, if one half of the pair (the "signal") is detected at any time then its partner (the "idler") is known to be present.

This is a "crystal+photon" interaction, that allows for the two produced photons to be entangled. Note the term interaction.

The incoming photon in the double slit experiment comes with a specific wave function, which is the solution of the quantum mechanical problem "photon hitting two slits of specific distance apart with specific dimensions", and thus one can get the interference pattern one sees in single photon at a time experiments, as this in this one here..

Any interaction after passing the slits will change this wavefunction, and due to the probabilistic nature of quantum mechanics the original phases in the wavefunction of the incoming photons, which carry the memory of the double slits, will be lost whether interacting with an atom in a detector or with a whole crystal splitting into two.

This is seen clearly in this which way experiment with electrons:

“When the electron suffers inelastic scattering, it is localized; this means that its wavefunction collapses and after the measurement act, it propagates roughly as a spherical wave from the region of interaction, with no phase relation at all with other elastically or inelastically scattered electrons,” Frabboni said. “The experimental results show electrons through two slits (so two bright lines in the image when elastic and inelastic scattered electrons are collected) with negligible interference effects in the one-slit Fraunhofer diffraction pattern formed with elastic electrons.”

In the image in this answer, the photon scatters inelastically on the total crystal.

It is enough to interact, for the double slit interference pattern to be lost.

I cannot comment on the implications you wanted, but can state that the original incoming interference pattern (phases) are lost.

Your proposed configuration does not show any interference.

The Quantum Eraser experiment restores the interference pattern by carefully erasing the which-way information in a coherent way (i.e. by taking coincidence counts against measurements on $D_1$ and $D_2$, in Wikipedia's notation).

Since your scheme does not do that, there will be no interference pattern.

1
Is the beta barium borate crystal an observer in the delayed choice quantum eraser double split experiment?
0
Double-slit-experiment but with unobserved alternating opening of slits. Does an interference pattern still arise?
7
Double-slit experiment: Difference between observing photon path and interference pattern?
2
Why does a BBO crystal put after 2 slits make the interference pattern disappear?
0
Idea for the Double Slit Experiment/Quantum Eraser
1
Double Slit Eraser - does the wave function collapse and restore or never collapse
2
What if you turn the photon detector on after the paired photon has already gone through both slits?