Would an $H_2O$ Molecule actually look like this 3D representation if we could see it? 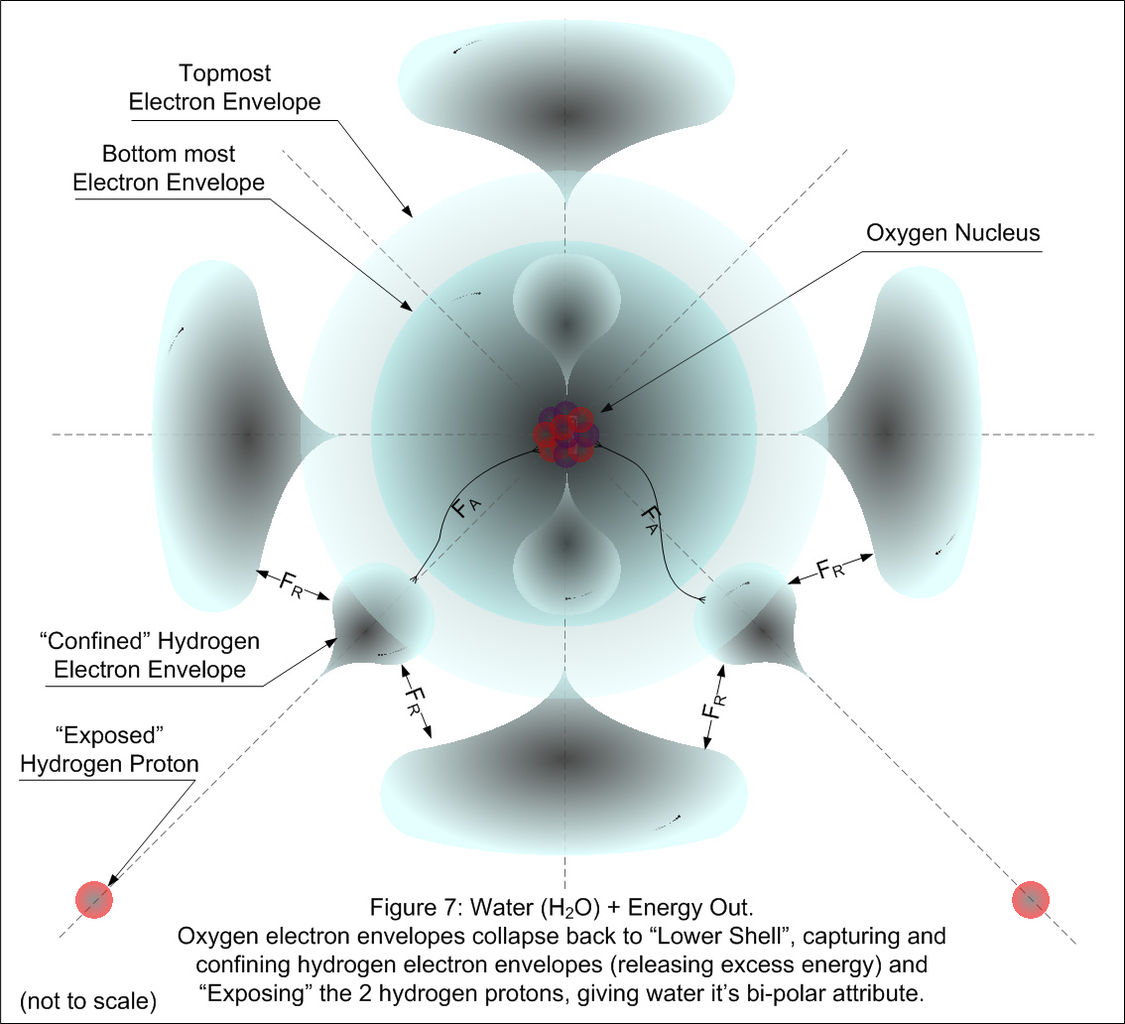 I'm trying to get a much better grasp on atoms and molecules and I am a visual learner. I found the above image here. This intuitively makes sense to me because I can see how the electron orbitals change from a spherical shape to a tear drop shape after this process: 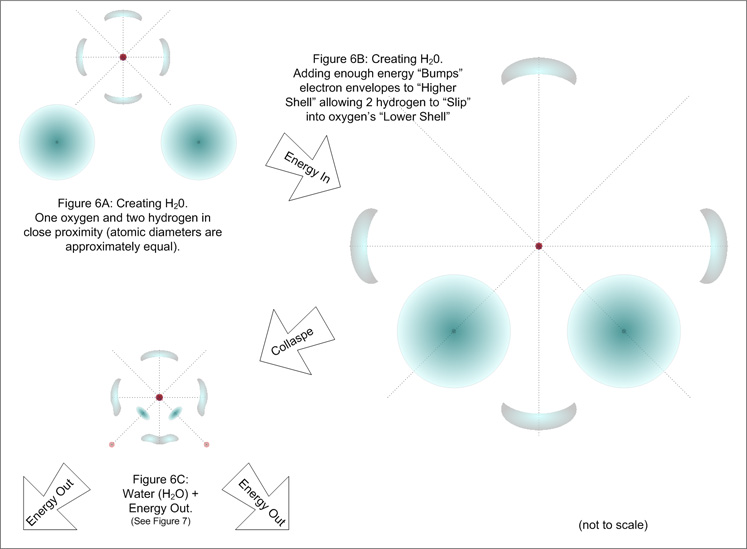 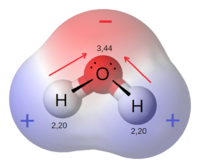 My question is, does the first model above actually represent the physical layout of the nucleus's and electron clouds of an H2O molecule (as best we understand it currently)?

It looks like the orbitals in the first picture above may be a bit off on the oxygen molecule since there should be two spherical shells around the oxygen nucleus (1S and 2S) with 2 electrons each and then the other 4 electrons would occupy (but not fill) the 3 2P double-teardrop shells on the X, Y, and Z axis (although I'm not sure why one axis of the 2P shell is smaller than the others). But barring that perceived discrepancy, the 4 valence electrons would exist in the teardrop shaped 2P orbitals, correct? That would make sense to me then how the hydrogen electron orbitals could get trapped behind them.

( I used this electron orbital diagram for oxygen for reference:

As part of an undergraduate project I calculated the electron density for various small molecules such as water and ammonia, and the disappointing result is that they are all basically formless blobs with only small bumps where the hydrogen atoms are. They ended up looking much like your last picture of water:

though even that picture exaggerates the bump in the electron density caused by the hydrogen atoms. Sadly I no longer have the results from my calculations, but then they were done in 1983.

So if you could see the water molecule I'm afraid it would just look like a roughly spherical fuzzy blob.

Although "a picture is worth a thousand words", in some cases explaining what a picture represents requires even more words. This is the case for the graphic representation of electronic density and electronic orbitals.

First of all, the two concepts have not to be confused. Total electronic density may be measured, while theoretical concepts al one-particle orbitals cannot. In many visualizations of electronic states in atoms and molecules the two quantities are mixed. Still they are different (orbitals are complex functions in general, and even if a real representation is selected they carry a sign, while density, being connected to a square modulus is positive by definition).

Even if one confines the attention to graphic representations of electron density, again some care is required to interpret pictures:

Furthermore, the image one can get from an iso-density surface can vary a lot depending on the chosen value of density, which is intrinsically quite an arbitrary value.

After all these words of caution, I should add that probably the best strategy is to use more than one visualization method in order to get a visual understanding of the electronic configuration, always keeping in mind that electronic density is an average quantity.

does the first model above actually represent the physical layout of the nucleus's and electron clouds of an H2O molecule (as best we understand it currently)?

The first picture looks quite difficult to understand to me. Of course there is no quantitative indication. But even qualitatively, there are a few suspicious features: i) those sharp points; ii) a very unphysical spherical shape around oxygen; iii) the presence and the position of four tear-like sall blobs. I would not assign a high degree of reliability to this icture as a faithful representation of the real electron density. It was probably intended as a purely qualitative representation of a linear combination of atomic orbitals without any claim of connection to the electron density of the molecule.

As far as the more symmetric blob shown also by John Rennie, it looks more reasonable, but only if one is representing the valence charge density. The real charge density of the water molecule would appear very different, by taking into account that oxygen conributes to the total density with 8 electrons,while each hydrogen with only one.

Depending on the meaning of "if we could see". If force microscopy can be considered as seeing (personally I think yes if we can reasonably sort an image out of observed data, e.g. x ray diffraction or electronic microscopy as more known techniques) then this paper is one among others that report direct molecular/atomic/bond images: 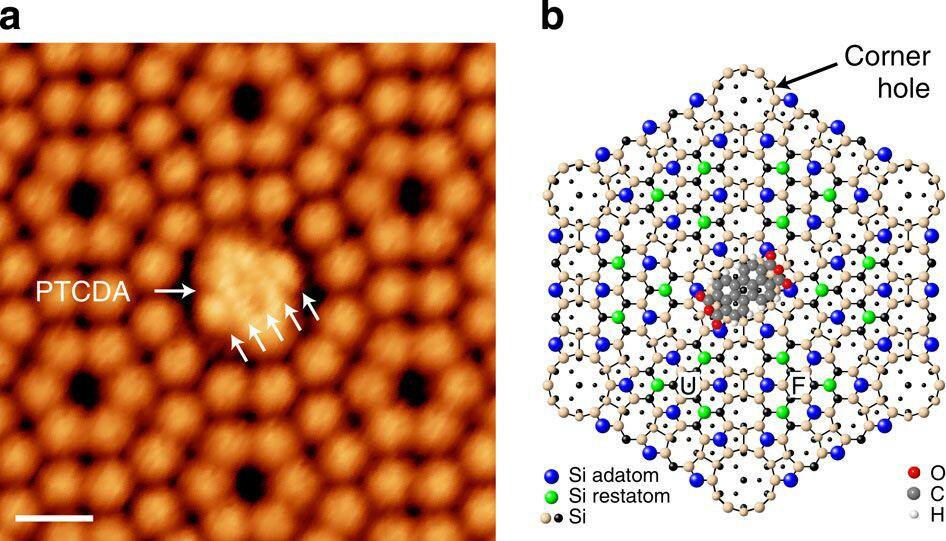 Note that in a molecule not all "parts" are equally "seen" by the AFM tip. For instance they can be spatially inaccessible or more/less chemically affine to it. Combining different layers can bring out details and/or enhance contrast, a bit like HDR technique in photography if I can use a loose analogy.

Moreover the assignment of specific features to specific orbitals/bonds can eventually be achieved by comparing the various images and calculations - although and with the limits mentioned above the final picture is depicting the molecule as whole.

More specifically to your answer: the water molecule would likely look as in the second plot. To date all molecular pictures turned out to be striking similar to what was sketched well before using any imaging techniques but just calculations or even based on chemical properties, reactions and products formation ^.

All images are almost superimposable to orbital and charge density plots as well as to the graphs which serve as frame and are known as molecular structural formulae. The latter were in use already in the 19th century!

To the question can we see a single orbital? Not the single electron of course, but this is why the notion of orbital emerged. The latter can indeed be seen at least through its corresponding charge density at some given discriminatory level, like in calculation s.

Perhaps technicalities and reactivity prevented to date the imaging of a single H atom but in principle an image could be obtained as for the TPDCA molecule taken as example above.

It will be a more or less fuzzy sphere - we can be confident on that.

^physical properties played a big role, too. For instance the existence of enantiomers suggested a tetrahedral geometry around C atoms.

edit after I found a basically identical question with valuable answers. While the discussion of afm and x-ray diff. are already in my A, there is a link to a spectacular results rendering H orbital in 3-D!

Not the answer you're looking for? Browse other questions tagged atomic-physics molecules orbitals quantum-chemistry or ask your own question.

16
Are orbitals observable physical quantities in a many-electron setting?

22
Why does the conjugated $\pi$ bond not violate the Pauli Exclusion Principle?
1
How could an s and p subshell occur together in an atom?
7
How does covalent bonding actually work?
9
What *really* happens to atoms in chemical reactions?
2
LCAO - Constructing a molecular wavefunction
4
What would measuring the position of an electron in an electronic superposition look like?