Work done by friction in this Case 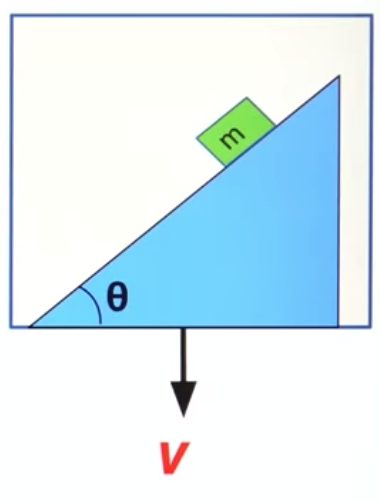 So there is an elevator going down with a constant and the block does not slip on the wedge. We have to find the work done by friction in time t.

What I don't understand is the fact that work done by friction generally leads to actual rubbing between two surfaces and in this case there is no rubbing happening so how is work being done?

You seem to be under the misapprehension that kinetic friction ("rubbing") does work, while static friction doesn't. That's a heuristic that works for objects which are sitting or sliding on fixed surfaces, but not in general. The definition of work is

where $\mathbf F$ is the force that you're interested in and $\mathrm d\mathbf x$ is a little bit of the distance that it moves. If the force is a constant and the displacement is all in a straight line, then the integral simplifies to

which you see more frequently in introductory classes.

Work is defined as force multiplied by displacement. If the displacement is zero, the work is zero.

Not the answer you're looking for? Browse other questions tagged homework-and-exercises newtonian-mechanics friction work free-body-diagram or ask your own question.