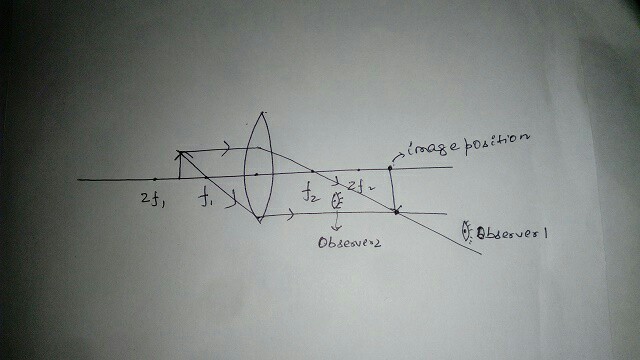 The ray diagram does not only provide the image position. It also provides the image size. The figure itself shows that. This is a real image. So observer 1 sees an enlarged real image as expected. Observer 2 is obviously preventing the formation of the real image. So you have to draw ray diagram including the eye lens to see what kind of an image will form.

If an eye is placed in position 2 it will hardly be able to see anything. Might be exceptions, but to see that we must elaborate the matter.

Normal (emmetropic) human eye is able to accomodate (to see sharply) objects situated between about 25 cm and infinity. This happens because thanks to the adjustable curvature of the crystalline lens rays coming by a source within that range can be made to converge to a point on the retina.

Of course rays coming from an object in front of the eye arrive at the pupil as a divergent beam. These are the kind of beam a normal eye is able to focus. But the eye placed in position 2 does not receive a beam of that kind, it receives a convergent beam. Such a beam will be brought to a point well before reaching the retina and will again diverge, thus forming on the retina an extended spot.

There is a kind of refractive defect allowing to bring to a focus converging beams too: it's hypermetropia. In any case within a limit. Since the questioner gives no numbers it's impossible to say if a moderately hypermetropic eye would see that image.

0
Seeing the image as explained by Geometrical optics?
0
Does “converge” mean intersecting and producing image when we are taking about convex lenses?
0
Does a magnifying glass always make image at least distance of distinct vision?
2
Why do light rays going to infinity form a real image?
1
Does the position of the final image in a multiple lens system found by the thin lens formula always agree with the ray diagrams?
0
How does a diverging lens in a Galilean telescope form an image at infinity when its object is at its focal plane?
4
Why do we see a blurred image when the screen is not placed at the position where the image is formed by a convex lens?
0
Image formation by convex lens
0
Why is a simple magnifying glass placed very close to the eye?