How are photons absorbed by electrons?

I study physics in high school and I was told about the Photoelectric Effect and Compton Effect, and there is something that seems strange to me: How does a photon physically absorbed an electron and pass it its energy? Is that an interaction? Are any force is applied?

EDIT: I fixed the question, I did not mean an actual collision between two bodies, it was an analogy for the energy transfer.

Ah, the electric force is present in those effects, but in a more local form. I believe understanding that alternate form is the solution to your question.

The electric force is often first encountered as an inverse-square law between distant charges. This is perhaps the description you know: two charges instantaneously experience repulsion or attraction when separated by some distance.

However, this "action at a distance" was theoretically unappealing to many physicists, who desired a local description of nature. Sure enough, physicists found a way to expand and reformulate E&M as a theory about electric and magnetic fields: because fields spread throughout space, a charge will generate a field which propagates outward and then interacts locally with other charges (and vice-versa), all without any action at a distance! This formalism also let's us fuse electric and magnetic forces into a single electromagnetic force, and in doing so reveals the existence of electromagnetic waves. These waves were identified as superpositions of photons, the fundamental constituent of light. In fact, any electromagnetic field may be reinterpreted as a swarm of (mostly 'virtual') photons.

So, the way we see the photoelectric effect in High school is more like the phenomenological ideas that lead to quantum mechanics. But quantum mechanics actually does not treat light as a particle in the sense that we think of a ball with a given mass and energy going and hitting another one. Quantum mechanics rather use the "wave" functions. Now the wave function can be a superposition of many Sine and Cosine-like wave functions(eigenbases in the momentum or the coordinate space) and as you may know, superposition of sins and cosines produces "beats" which we call the wave packets in quantum mechanics. Now, these wave packets of arbitrary shapes are what we call photons. 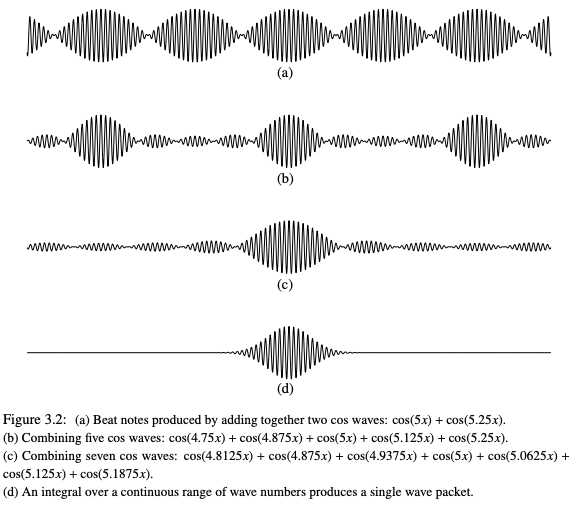 . So now coming to your problem, the quantum mechanical wave function of a light wave is still propagating like a field. The only difference is that the dynamics we use is quantum mechanics.

PS: I think the quantum mechanics is not "Quantum" in terms of what we think when we are in high school. In my opinion (I have not studied QFT and creation-annihilation operators are the closest truly quantised treatment I have seen so far), most of the discreteness in quantum mechanics emerges from the solutions of the "wave" equations. You never really tell the math to be discrete(like you would in logic or any other mathematical field). Not to say there is no discreteness, I only want to emphasise that most of the thinking and math is still "wave" mechanics driven.

Not the answer you're looking for? Browse other questions tagged photons photoelectric-effect interactions or ask your own question.

2
Ejected Electrons with 0 KE?
0
Can a photon survive a collision? If so, is it at rest during the process?
3
Show that a photon cannot transmit its total energy to a free electron. Contradiction with Photoelectric effect?
4
Photoelectric effect absorption coefficient decreases with energy, why?
1
Cases wherein electrons do not follow "all or nothing" principle
0
Is photoelectric effect example of inelastic collision
0
Are photons and electrons "elastic" particles?