My questions concerns the IceCube experiment, in particular, the interaction between muon neutrino and the down quark. I've drawn the following Feynman diagrams: 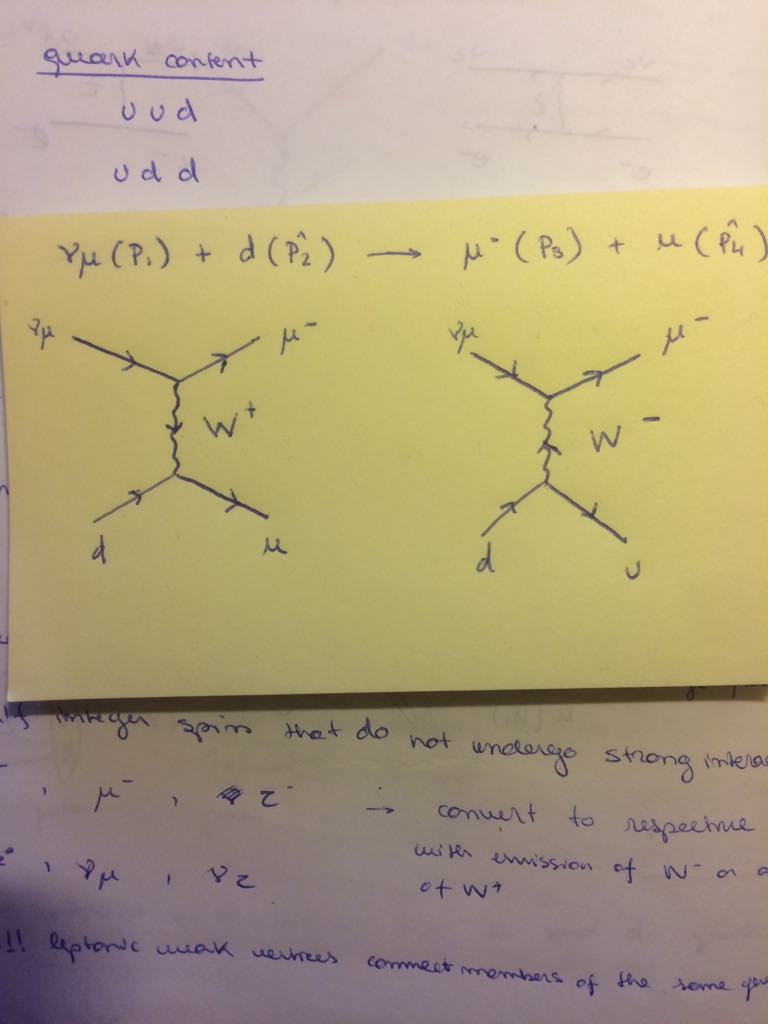 Are both diagrams correct? Can I say that the muon neutrino can emit a $W^+$ boson that the down quark absorbs?

They are the same diagram as far as the prescription for writing the integral that has to be evaluated for the interaction. The arrow on charged particles changes the particle to an antiparticle, so a W+ with the down arrow is a W-, by the definition of the rules of the feynman diagrams.

I would read it as "a virtual W- emitted by the down quark changes it into an up quark and changes the muon neutrino into a muon".

Or one can read it as "a virtual W- is emmited by the muon netrino turning it into a mu- , and the down quark absorbs it and turns into an up quark.

Charges are conserved in either interpretation, and as the exchanges can only be virtual there is no problem of "decay, either way, as the masses do not allow on mass shell W's.

Not the answer you're looking for? Browse other questions tagged particle-physics feynman-diagrams quarks weak-interaction or ask your own question.

19
Neutrino oscillations versus CMK quark mixing
2
Neutrino-Neutron Interaction Feynman Diagram (W Boson Direction)
2
Charged-current: Why does the neutrino interact with the down-quark?
1
Drawing the quark flow diagram for proton-pion interaction
5
Why can the $W^{+/-}$ particles change quarks of different generations, while the $Z^0$ only changes leptons of one generation?
0
Muon neutrino interacting with nucleon's quarks
1
Feynman diagram possible interaction
4
How does the introduction of the charm quark suppress FCNC?