Can an electron be in two places at the same time?

So I've been reading a bit and watching some videos about the double slit experiment, and therefore the wave particle duality; I've also read this "implies" that a particle can be in two places at the same time. Can you clarify this, and how could that be possible?

You should forget everything you've been told about the wave particle duality. It's an outdated concept long since superceded by quantum field theory, and I think it's actively unhelpful because it causes confusion.

To properly describe the behaviour of electrons you need to use quantum field theory, and indeed Richard Feynman (one of the inventors of quantum field theory) showed how to calculate the results from the double slit experiment using QFT. However the calculation is exceedingly hard and beyond most of us. Fortunately it's a good approximation to describe the electron as a wave, and using the wave approximation it's pretty easy to calculate the results of the double slit experiment. However you need to be clear that this doesn't mean the electron is a wave. Treating it as a wave is just an approximation that happens to work well for this experiment.

Let me expand my answer in the light of Eduardo's comments, because I'm not sure that we are actually disagreeing.

There are two consequences to using the Schrodinger equation instead of QFT. Firstly it is in principle less accurate, though as Eduardo says for the double slit experiment there is basically no difference between the two. It's the second consequence that I think is relevant to this question. QFT is not just a more accurate version of the Schrodinger equation - it introduces new concepts. In particular it introduces the idea of the quantum field, and it's this idea that makes the wave particle duality meaningless because in QFT it simply doesn't appear.

This is the point I was making, it is the light cast by QFT on the idea of wave/particle duality that matters, not whether you would actually use QFT to do the calculation.

Finally, for an answer to be helpful it has to be understandable. I judged from the question that the OP didn't know much about quantum mechanics (Jerson, I apologise if this isn't true) so the answer has to be at the "pop science" level. Answering in this way always runs the risk of being misleading or saying things that are plain wrong, but in this case I don't think I have fallen into either of these traps.

When a series of electrons is sent towards a screen with two slits, the pattern that emerges on the other side shows interference, which is the result of the electron having multiple paths to travel between the source and each point on the screen. Since each possible path makes a contribution to the probability of where the electron is detected using the screen, in some sense the electron travels over more than one path. However, any attempt to actually observe the electron in more than one place will fail.

Keep in mind Heisenberg's uncertainty principle which says that with the better certainty you know an object's position, the less certainty you have on its velocity and vice-versa. The key point here is "certainty"... i.e. this is all probabilistic.

I found quantum physics to be non-intuitive when I took an intro course in university. It's important to recognize that your intuition helps you in subjects where you have experience but expecting intuition in a completely new and unparalleled subject like QM can actually hold you back. Afterall, the fundamental basis of QM is assuming that energy comes in discrete quantities rather than a continuum. There's no obvious, intuitive reason for this, necessarily... but the results that come out of QM are spectacular- in that they are extremely well supported by experiments.

There is no claim that QM is "the complete" way of how the world works, in fact it is at the least incomplete. For example, there is not yet a quantum mechanical theory of gravity. Maybe once that is found some underlying theory will be concocted from which both quantum physics and general relativity can be derived. Kind of like how Newtonian mechanics can be derived from relativity. Maybe that theory, if it comes about, will have better answers the the most basic questions one can ask like "why is energy discrete rather than continuous?".

QM is just a model of the world, that happens to work out very well in certain scales of size and energy.

Particle and wave are two concepts and also phenomena that scientists used to describe the properties of an electron. Electron is electron but will show its different properties to you during our different observation environment setups.

The interference pattern does not need to conclude that electron particle should behavior like a wave to cause that kind pattern. Uncertainty and diffraction of electron can also cause that kind result. I feel that too many illogical words have caused mind confusion! Nobody really knows what an electron is completely. What an electron is and what an electron can behave are different concepts to be clarified. It's my opinion! By the way particle is point, but wave is a function to describe all the possible locations of the particle. Electron particle cannot appear at two different points but you can find it through your interaction experiment setup.

Yuor question is related to double slit experiment, and a number of relevant answers is given.

But what if we push aside the double slit experiment, and ask "if a particle can be in two (or more) places at the same time?"

Consider, for example, proton. According to modern theories, proton:

A. Consists of quarks

B. The number of proton constituents is dependent on the reference frame (despite common delusion that proton consists of 3 quarks only), see this link for details

C. Quarks are "confined" inside proton, i.e. single quark has never been (and cannot be) observed

Let's get back to your question now. In fact, all these "strange" features of proton can be explained if we assume that proton has only one constituent that can move faster than light.

As you probably know from special relativity, superluminal (i.e. faster than light) particles "can be in two (or more) places at the same time". Look at the graph below: 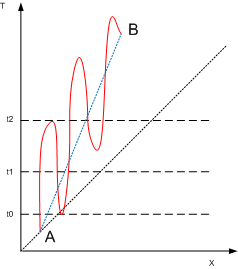 Here you can see a particle moving along a curved (red) line. Taking account the shape of the line, that means that sometimes the particle is moving faster than light.

At the time $t0$ we observe "pair creation".

At the time $t1$ we observe particle in 3 different places (twice as particle and once as anti-particle). Equivalently, we can interpret this as observation of 2 "quarks" and 1 "anti-quark".

At the time $t2$ "old" particle is "annihilated" by the "new anti-particle", and so on.

By the appropriate change of the reference frame, we would be able to see the partcle "in more than 3 places at the same time".

From this picture it is absolutely clear why single "quarks" cannot be observed. This is because there is only 1 particle (sometimes superluminal) instead of 3 (subluminal) "quarks". Hence "confinement of quarks" can be explained in a very simple way.

Please also note that line AB on the graph lies within the light cone. Tha means that "on average" the particle is subluminal (moving slower than light).

It is interesting that the similar (but not the same!) solution to the free Dirac equation was found by Erwin Rudolf Josef Alexander Schrödinger, and physical phenomenon associated with this solution is known as Zitterbewegung (trembling motion).

Hence, in principle, the answer to your question is: YES, it is possible to develop a model (consistent with the properties of proton) where a particle can be in two (or more) places at the same time.

Not the answer you're looking for? Browse other questions tagged quantum-mechanics double-slit-experiment measurement-problem wave-particle-duality or ask your own question.

-4
Particles can be at the same time in two places. Why?
14
About free quarks and confinement
11
Is it possible to define a “it went through two slits” observable?
4
How the nucleon structure has been identified experimentally?