Friction while Rolling Without Slipping 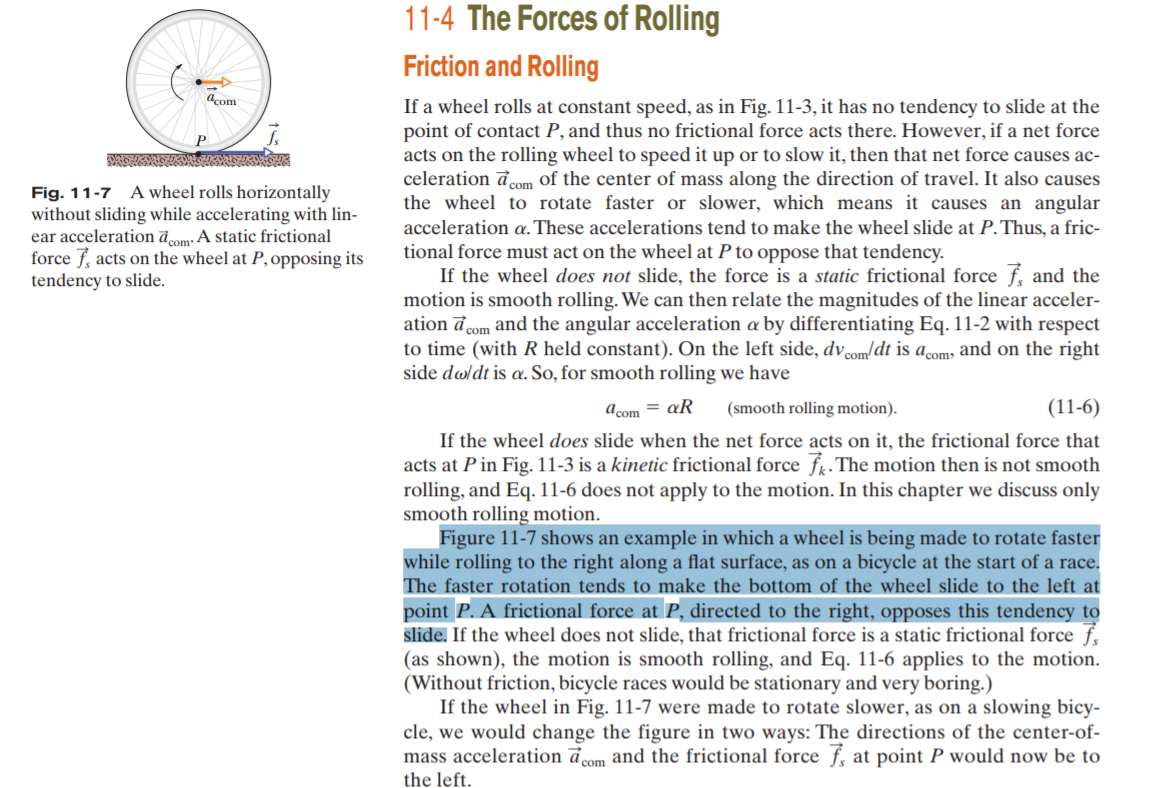 This is an excerpt from an elementary Physics textbook ("Fundamentals of Physics" by Halliday), which describes what happens when a wheel that is "rolling without slippging" doesn't have a constant speed. This part doesn't make sense:

Figure 11-7 shows an example in which a wheel is being made to rotate faster while rolling to the right along a flat surface, as on a bicycle at the start of a race. The faster rotation tends to make the bottom of the wheel slide to the left at point P. A frictional force at P, directed to the right, opposes this tendency to slide.

Why does this frictional force go the same direction as the force that's accelerating the wheel? I've seen some numerical proofs of this on StackExchange, but I couldn't find a conceptual proof for it.

Why does this frictional force go the same direction as the force that's accelerating the wheel?

Because it is the force that's accelerating the wheel. There are no other forces pushing forward (to the right). Without static friction the bike would not move forward at all.

Try to lift the wheel off of the ground - you can spin the pedals all you want, but you won't move forward. Or try cycling on slippery ice with no friction. You won't be able to move anywhere.

So, obviously static friction does push forward - but why?

This is Newton's 3rd law. You apply a force and a responding force (or a reaction force) acts on yourself the opposite way. This is what happens for a rolling wheel at the contact point.

And this is how a bicycle is able to push itself forward by exerting a backwards push in the ground.

Think about a bicycle accelerating from left to right in the diagram. The page in your image doesn't say that the diagram shows the rear wheel of the bike not the front wheel, but that is important. (See the last paragraph of the answer for what happens to the front wheel.)

If there is no friction, the rotation of the wheel is accelerated by a moment applied to the axle of the wheel by the bike chain. That will make the wheel spin clockwise as shown by the arrow, so the bottom of the wheel is slipping from right to left relative to the ground.

The friction force that opposes the slipping acts on the bike from left to right, as shown in the picture. This is "the force that is accelerating the linear motion of the bike".

The force the rider applies to the pedals does not accelerate the bike, it only spins the rear wheel faster. If there was no friction force, the bike wouldn't move at all. Think about the similar situation of trying to start a car moving on an icy road - if there is no friction between the wheels and the ice, the engine will spin the wheels but the car won't move.

If you think about the front wheel, the situation is different. Now, there is a horizontal force applied to the axle of the wheel by the bike frame. If there was no friction, the wheel would slide to the right without rotating at all. The friction force on the sliding wheel acts to the left, and increases the rotation speed of the wheel so that it doesn't slip.

Figure 11-7 shows an example in which a wheel is being made to rotate faster while rolling to the right along a flat surface, as on a bicycle at the start of a race.

To simplify matter assume that it is the wheel of a unicycle.
The passage implies that a clockwise torque about the axle has been applied on the bicycle wheel by the pedals attached to the bicycle wheel.
(All a chain and gear arrangement does is to transfer and modify the applied torque).

In terms of the no slip condition $v=r\omega$, the frictional torque is trying to prevent $\omega$ increase “too rapidly” and the frictional force is making $v$ increase to keep up with the increase in $\omega$.

The idea of the torque due to friction and the force due to friction being “opposed” to one another occurs very often in rotational dynamics.
If you have a cylinder rolling down a slope the frictional force is up the slope and is trying to reduce the translational acceleration of the centre of mass of the cylinder down the slope whilst that same frictional force is providing a torque on the cylinder which is trying to increase the rotational speed of the cylinder.

When you apply force on the wheel by peddling the wheel moves in a clockwise direction from 'right to left'.

As the motion is just starting we see that the wheel is slipping relative to ground which means friction is acting from 'left to right'.

And this is the force that starts the rotation of the wheel.

Friction is the very force that accelerates the wheel by opposing its rolling motion in backwards direction.

The concept here is same, ie- Friction is still opposing the motion of wheel. This is opposition is leading to a net acceleration in front direction.

10
The direction of frictional force in smooth rolling motion
0
Friction of a sliding, then rolling, sphere
1
Torques when on a bicycle
2
When does Rolling Friction come into play?
2
Adhesion vs Static Friction
0
How does acceleration work for rolling?
1
Working with ramps and rotational acceleration (friction involved)