Why are ropeway pillars tilted?

While skiing I have noticed that ropeways pillars are usually tilted to be perpendicular to the slope (fig.1). If the gravity is pulling straight down, why aren't they vertical as they are supposed to support ropeway's weight? Is there something more they "do"?

Also there are pillars which function is not to support weight but to "push" the rope down in order to keep it tense, why is it so crucial? Why the rope needs to be tense? 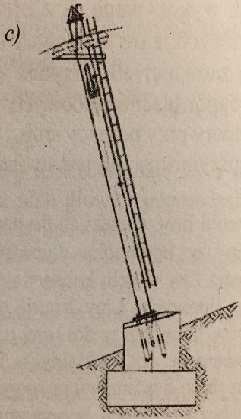 The cable can only put a force on the mast that is perpendicular to itself: It runs over rollers which do not allow it to transfer any force in the direction of the cable.

As such, the force on the mast is exactly given by the angle between the oncoming and the outgoing cable. This force is roughly perpendicular to the slope of the cable (assuming a small deflection of the cable by the mast), especially if the cable has several supports in a roughly straight line.

The mast is setup in such a way, that the sum of this perpendicular force and its own weight is roughly in the direction of the mast itself. And since the weight of the mast is by far the smaller force of the two, you see the strong diagonal setup.

Of course, the cabins pull the cable straight down, even though the masts only take a force perpendicular to the cable. The difference is taken by the cable itself, which has a much higher tension at the upper end of the ropeway than at the lower end due to this.

As to why you need so much tension on the cable: The lower the tension, the greater the slack of the cable between the masts, and the more masts you need. It's generally just much cheaper to build two very well-anchored stations and use a high tension, than to build more masts. And that assumes that the additional masts can actually be built at sensible costs, which may not even be the case.

The cable is pulling up the slope and the masses are pulling down vertically, the net force is slightly angled forward and that's what the poles support.

Not the answer you're looking for? Browse other questions tagged newtonian-mechanics statics or ask your own question.